A luxury benchmark pushes the limits of technology. 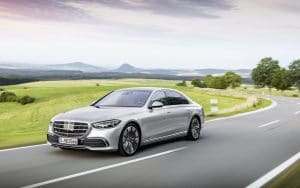 For 2021, the S-Class continues to set the benchmark for luxury and performance in the industry.

No car has better defined the Mercedes-Benz brand than the flagship S-Class, and few have so clearly set the bar for the rest of the auto industry. So, with a new version of the sedan coming next year, the challenge the German marque faced was where to go next.

As it turns out, the 2021 S-Class punches all the traditional buttons, with a striking design and all the expected luxury touches, from wood and metal accents to the massaging, heated and cooled seats. But, in keeping with the direction of the last several S-Class generations, it’s with the vast array of technology onboard that Mercedes really aims to remain the industry benchmark.

Arriving in U.S. showrooms during the first half of 2021, the seventh-generation S-Class – known inside Mercedes as the W223 model – is a showcase of high-tech features, from the studio quality “4D” surround sound system to the augmented reality Head-Up Display. It debuts an updated version of the MBUX voice assistant and an assortment of new driver assistance and smart safety systems. Even the powertrain goes high-tech with the addition of new EQ Boost powertrains.

(Mercedes-Benz E-Class wagon gets updates for 2021.)

“With the latest generation we want to offer our customers innovation, safety, comfort and quality as never before,” said Ola Källenius, chairman of Daimler AG and Mercedes-Benz AG. 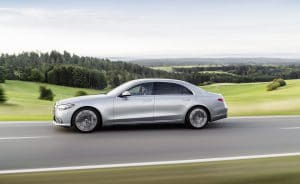 The new S-Class gets plenty of updates to improve sedan for the new model year while it retains its familiar shape.

From first glance, one will recognize this next-generation S-Class. It retains the more coupe-like silhouette of the outgoing model, along with the classic, long hood that signals the power barely hiding underneath. The grille appears slightly more imposing, and there are different takes on the lower portion of the front fascia, depending upon model and powertrain. From the side, the S-Class gets a smoother surface, with more subtle character lines.

The overall shape clearly shows the influence of aerodynamics meant to enhance fuel efficiency. That shows up in numerous ways, including the now seamless door handles which automatically extend when the driver approaches the vehicle.

The new model features thinner and more high-tech headlamps. Unfortunately, the U.S. still does not allow the active headlight technology increasingly common in Europe which uses an array of LEDs to automatically dim light to avoid blinding other motorists. That could be approved before the end of the new model’s lifecycle, however.

Lighting has become as much a luxury queue as leather and wood and the interior of the new S-Class makes elegant use of ambient lighting. The new system is brighter than on the outgoing Benz, and smarter, automatically adjusting levels depending on whether its day or night. And the optional system now reinforces vehicle alerts. A driver doesn’t have to plow into the infotainment system’s menus to adjust ambient lighting, either, as it can be controlled by the updated MBUX voice assistant. 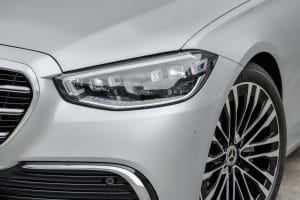 The new S-Class gets new thinner and more technologically advanced headlights for 2021.

The cabin of the new S-Class has undergone extensive updates, starting with updated seating and the use of more recyclable materials. The front seats have up to 18 individual motors to make it easy to find the most comfortable position.

Occupants will immediately notice the all-new and more sculptured instrument panel. There’s a more minimalist feel to it, with fewer traditional controls. Most operations now can be handled either by touch control on the steering wheel, using the massive touchscreen atop the center console or using the MBUX system which, Mercedes notes, gets a 50% boost in processing power and three NVIDIA graphics chips.

As with the prior generation S-Class, a digital display replaces traditional, analog gauges, but the new sedan opts for a screen that appears to float above the IP.

One of the more intriguing new features is the optional augmented reality head-up display. “When navigating, for example, animated turn-off arrows (“fishbones”) are virtually and precisely projected onto the road lane,” Mercedes explains. “For the assistance functions, information from i.e. Active Distance Assist is shown. The image appears virtually at a distance of 32 feet, which corresponds with the display area to a monitor with a 77-inch diagonal screen.” 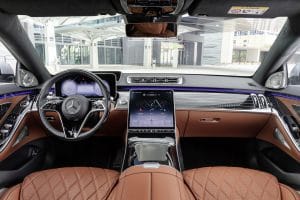 The sedan’s occupants can enjoy an audiophile sound system that enhances the sense of “staging,” or the apparent position of individual instruments and vocalists. This “4D” system produces 1,750 watts of power through 37 separate channels. The audio system is integrated into the seats, incidentally, to make every occupant feel like they’re sitting in the best seat in the house.

The cabin also introduces new safety features including rear airbags to reduce the risk of injury to back seat passengers in the event of a crash.

As you’d expect, of course, the new S-Class puts an emphasis on accident avoidance with an array of advanced driver assistance systems backed up by an expanded array of cameras, radar and other sensors.

These include familiar technologies, such as forward collision warning with automatic emergency braking but adds features like evasive steering assistance and active lane changing assist. The new model makes it easier for a driver to relax though it notably does not feature any breakthroughs in terms of hands-free driving capabilities. Not for now, anyway.

But just hang tight. Mercedes says it is getting ready to add its new Drive Pilot system late next year, starting in Germany and then rolling it out in other markets. This is what is known as Level 3 technology and is expected to allow extensive hands-free driving opportunities — though a motorist will still need to be ready to take control in an 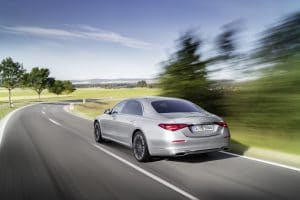 The new S-Class continues to set the bar for its segment.

emergency. The automaker also revealed it is working on a Level 4 upgrade that would permit running in “geofenced” areas without even a driver behind the wheel.

In the meantime, the new S-Class will feature an upgraded version of the current model’s auto-park feature. That essentially allows the vehicle to park itself in a garage with the proper infrastructure — even with the driver exiting beforehand to squeeze into an especially tight spot. Operation is controlled by the Mercedes app which also allows keyless entry and automatically adjusts the MBUX system and various vehicle settings to the preferences of an individual driver.

Additional screens are available for rear seat passengers, as well, who can use the system to set up their own vehicle preferences.

From a mechanical standpoint, the new S-Class also gets upgraded in a variety of ways. That includes a new version of the E-Active Body Control system that not only helps maintain a stable ride on rough pavement or during aggressive driving but now also raises the car slightly in the event it detects an impending collision, helping direct crash forces away from passengers.

The sedan’s suspension, meanwhile, uses its sensors to make “predictive” adjustments before hitting potholes or rough pavement. There are several predictive technologies onboard, another automatically adjusting vehicle speed when adaptive cruise control is active when the speed limit changes. 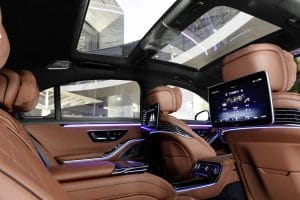 The MBUX system gets a 50% boost in processing power.

The 2021 S-Class will now be offered with a rear axle steering system that can turn the back wheels by as much as 10 degrees to make the sedan more nimble on city streets. “For the S-Class with a long wheelbase and all-wheel drive, the turning circle is reduced by 6.2 feet to under 35.8 feet,” the automaker notes. On highways, meanwhile, Mercedes claims it also will enhance stability at higher speeds.

On the powertrain front, the new S-Class will be offered with an array of engine options, from base to AMG packages. These include new turbocharged powertrain packages using the mild hybrid EQ Boost technology.

The electrified inline-six in the S 500 4Matic, for example, turns out 429 horsepower and 384 pound-feet of torque. And power comes on earlier thanks to the 48-volt assist technology. The EQ Boost system also is used on some of the sedan’s V-8s. The S 580 4Matic punches out 469 hp and 516 lb-ft. Better yet, the electric assist technology allows short, additional bursts of power – as much as 21 hp and 184 lb-ft.

We’ll have to wait until closer to launch for some key details, including fuel economy numbers and pricing. The outgoing sedan starts at $94,250 and pushes above $150,000 with a fully equipped AMG edition. With all the new technology onboard, few would be surprised to see the 2021 Mercedes-Benz S-Class get a bump upwards, especially with all the option boxes ticked.