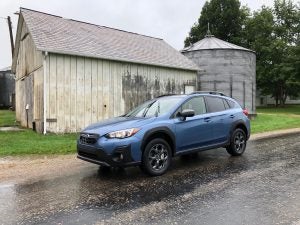 Subaru’s packed in plenty of updates on its popular Crosstrek for the 2021 model year.

Say the name “Subaru,” and it’s likely to bring to mind a crossover sweeping through a curvy, back-country road, perhaps shrouded in a bit of mist. That scene came to life earlier this month when we headed down to mid-Ohio’s Amish country to check out the new 2021 Subaru Crosstrek.

We had the chance to drive several versions of the subcompact crossover, including the Limited trim, checking out the various updates for the new model-year. But we focused our attention on the Crosstrek Sport, an all-new edition added for 2021.

Overview: First introduced in 2012 as a 2013 model, the Subaru Crosstrek shares the same underlying platform as the Impreza hatchback. That gives it excellent on-road manners, though the crossover’s all-wheel-drive system and higher ground clearance permit it handle modest off-road situations, primarily dirt and gravel roads.

(Subaru expected to team with Toyota to bring Evoltis battery SUV to market.) 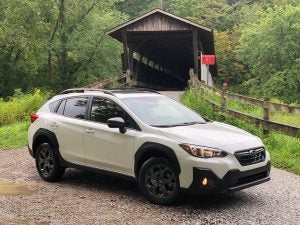 The crossover segment is crowded, but the Crosstrek sports a handsome design that differentiates it.

Crosstrek is one of the products that has helped the Japanese automaker continue to build a loyal U.S. following. It has become the brand’s fastest-growing nameplate, demand so strong that Subaru is struggling to rebuild inventory following a two-month factory shutdown due to the coronavirus pandemic.

A second-generation version of what foreign buyers know as the Subaru XV was launched in 2018 and will get a modest facelift for the coming model year. Changes are modest, inside and out.

The most significant news for 2021 is the debut of the Subaru Crosstrek Sport model which gets a new 2.5-liter flat-four and a more aggressive tuning of its all-wheel-drive system, among other things.

Exterior: In an increasing crowded crossover market, it’s easy to get one model confused with another.

“…While not a breakout design, the Crosstrek has a handsome appearance, enhanced by the coupe-like sweep of its roofline…”

For 2021, all versions get a new grille and front bumper. The Crosstrek Sport, meanwhile, gets a unique fascia and larger bumper cladding meant to enhance the sense that it can handle a bit more off-roading than other versions. It also features a new wheel design. 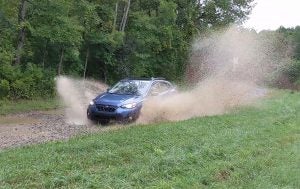 The Crosstrek Sport gets a unique fascia and larger bumper cladding meant to enhance its off-road looks.

Interior: Subaru has wisely aimed at upgrading its interiors in recent years, moving beyond the “cheap and cheerful” plastic that gave its products a somewhat down-market look and feel. That said, it’s not quite up to some key competitors.

The Sport does try to live up to its name with unique gauges, distinctive orange stitching and the new StarTex upholstery which should appeal to those who really do have an outdoor lifestyle since it is easy to clean. We can do without the faux carbon fiber trim, but appreciate the use of recycled materials. It doesn’t quite go all vegan, however, with its leather-trimmed steering wheel.

As for cargo space, it’s on a reasonable par with competitors like the Honda HR-V. The 60/40 fold-down rear seats help – though they don’t fold into a completely flat load floor.

Powertrain: There are now three different powertrains available for the 2021 Subaru Crosstrek line-up, starting with the old and decidedly underpowered 2.0-liter flat-four now used for base and Premium editions. 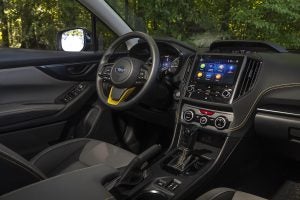 The interior of the Sport mostly lives up to its moniker.

The good news is that the Sport – along with the Limited – model gets a new 2.5-liter boxer engine also found in the bigger Legacy and Outback models. That takes power up from a meager 152 to 182 horsepower, torque climbing 31 pound-feet to 176. Sport and Limited models both come exclusively with Subaru’s CVT gearbox, the base and Premium lines offering an optional 6-speed manual.

The added grunt of the new 2.5-liter engine is useful if you put the Crosstrek Sport to work, allowing up to 1,500 pounds of towing.

There’s a third powertrain option, albeit one limited to select markets. And we can understand why. This plug-in hybrid is essentially just a compliance car, meant to let the automaker meet strict mandates in states adopting the California emissions guidelines. With its small battery pack it delivers a meager 17 miles in all-electric mode, though it definitely does boost fuel economy. Charging times run 5 hours on a 120-volt circuit, 2 hours on 240. 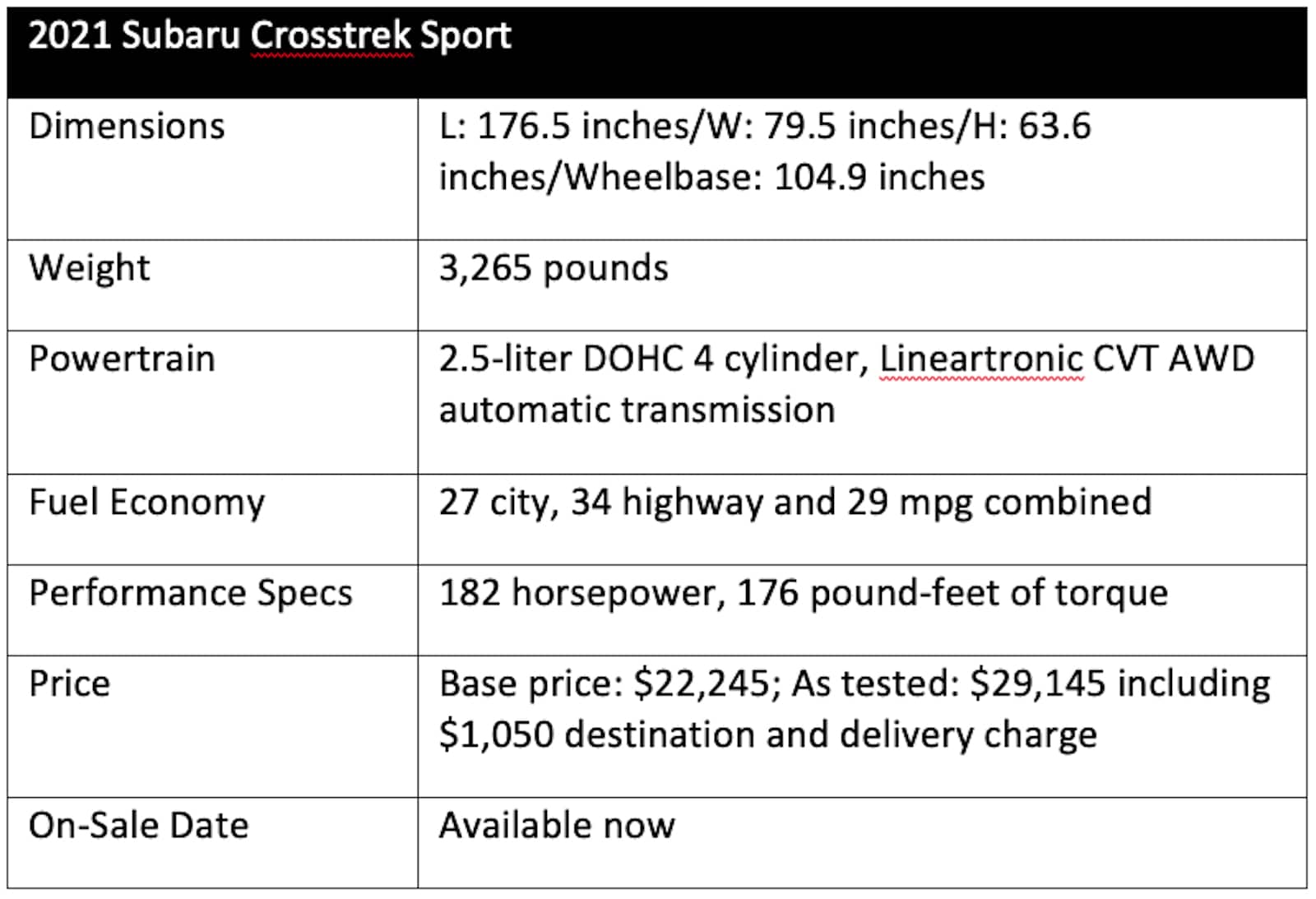 Like the rest of the Subaru line-up, one of the appealing features on the CrossTrek is the EyeSight package of advanced driver assistance systems, such as forward collision warning with auto-braking. The 2021 model-year brings the addition of optional advanced active cruise with lane centering. Some features are standard issue but the optional ADAS technologies are reasonably priced compared to some key competitors.

The crossover also gets the Subaru StarLink infotainment system, featuring a 6.5-inch touchscreen and both Apple CarPlay and Android Auto. Unfortunately, an 8.0-inch screen is available only on Limited and hybrid models. Navigation is optional only on the bigger screen. One other complaint: you can only order the upgraded audio package on the Limited, not the Sport.

Drive Impressions: The new 2.5-liter engine makes a huge difference, transforming a sluggish driving experience into something worthy of the name, “Sport.”

Despite the 8.7-inch ground clearance, the 2021 Subaru Crosstrek Sport retained much of the road-hugging feel of the lower Impreza, something that impressed us driving on damp roadways. The all-wheel-drive system, backed up by the normal assortment of “nanny” systems, such as electronic stability control, rarely gave any hint that the tires were ready to lose grip. 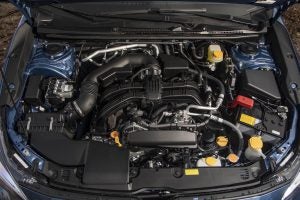 The Crosstrek is powered by a 2.5-liter 4 cylinder Boxer engine putting out 182 horsepower.

We spent much of our time in mid-Ohio traversing ancient dirt and gravel roads – and the occasional, time-worn covered bridge – and found we could flog the Crosstrek around with assurance.

On pavement, the ride was comfortable, though the crossover could use a bit more sound-deadening.

But, with its standard all-wheel-drive system tunable to a variety of different road conditions, the Crosstrek delivered what we expected.

(Subaru CEO sees little demand for EVs in the U.S.)

Wrap Up: At a starting price of $26,495 – before factoring in a $1,050 delivery fee, the Subaru Crosstrek Sport is the sort of vehicle that one can count on in just about any weather condition and on any sort of roadway. It clearly lives up to the Subaru reputation.

It faces some tough competition but, as its booming sales show, it stands up soundly for itself. 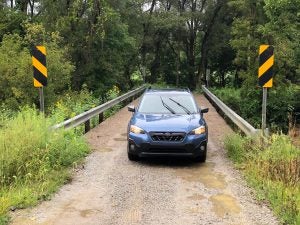 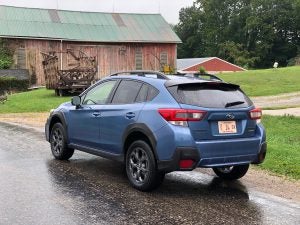 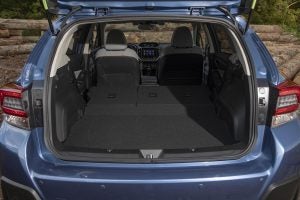