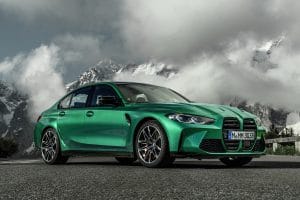 The new 2021 BMW M3 – the Competition package shown here — picks up on the bigger double-kidney grille first seen on the 4 Series.

While the top end BMW 7 Series sedan and X7 Sport Activity Vehicle might serve as the Bavarian Marque’s twin flagships, but the M3 sedan and M4 coupe are the two models that really shine the brand halo – and both are going through significant makeovers for the 2021 model year.

Some of the biggest changes can be found under the hood of the two M models which go through sweeping mechanical changes. For one thing, the familiar powertrains in the current models are being replaced by turbocharged inline-six alternatives making up to 503 horsepower in the Competition editions. And to handle all that power, the new muscle cars migrate from rear to all-wheel drive for the first time with the Competition edition.

Visually, the two models get more aggressive and the M3 adopts the enormous kidney grille first used on the outgoing M4. More broadly, the two M models will now be more easily differentiated from non-M versions, according to Adrian van Hooydonk, the head of BMW Group Design.

“The design is resoundingly function-driven, pure and reduced without compromise,” he said in a statement. “At the same time, it provides an emotionally engaging window into the vehicle character.” 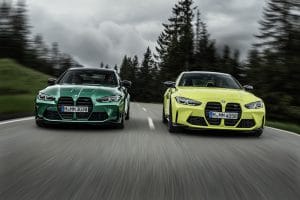 Check out the new M3 and you’ll immediately notice the massive new double-kidney grille. But that’s only the beginning. The sedan gets a new front bumper, tweaks to the hood, and flared wheel arches that enhance the newly widened track.

The increases are particularly noticeable from the silhouette where you’ll also see more curve to the side panels, more pronounced side sills, and a distinct crease by the front door opening, where air exhausts from the forward air curtains. Around back, look for a new lip spoiler and a quad exhaust.

That new, dual-branch exhaust, shared on both the M3 and M4, have been retuned to enhance the performance sound of both models. It uses electronically controlled flaps that enhance the sort of rumble motorists want to hear while tuning out more “intrusive sound” that customers want to avoid, BMW explains. The intensity automatically amps up in Sport and Sport+ modes, and when a driver hits the M Sound button. 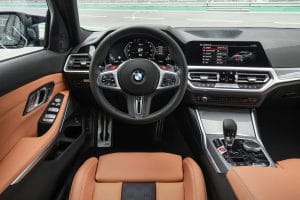 The interior of the 2021 BMW M3 Competition model.

BMW put an emphasis on cutting mass with the new models, among other things migrating to new carbon-fiber reinforced plastic for the roofs on both the M3 and M4.

Both models will be available with optional M Carbon exterior packages which, BMW says, includes inlays for the front air intakes, a rear diffuser, exterior mirror caps and a rear spoiler made from CFRP.

Less mass clearly improves performance and, by lowering the center of gravity, the new M3 and M4 improve handling. But the key to performance is still found under the hood and the two M models now go with BMW’s new S58 powerplant which peaks at 473 horsepower and 406 foot-pounds of torque – up 43 hp from the outgoing models. The Competition models go even further, at 503 hp and 479 lb-ft up 59 hp and 73 lb-ft from the old Ms. That’s enough to hit 60 in just 3.8 seconds.

The new engine uses wire-arc sprayed cylinder liners to cut friction and weight, along with a 3D-printed cylinder head core and a forged, lightweight crankshaft. There are twin mono-scroll turbocharger and a track-ready cooling system. 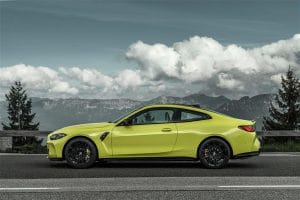 Like the new M3, the 2021 BMW M4 grows longer, wider and ever so slightly taller.

While the 8-speed M Steptronic gearbox is likely to dominate sales, a 6-speed manual will remain on the option list for those who choose to row their own.

To handle a combination of track conditions and everyday driving, all versions of the new M3 and M4 will come with BMW’s Adaptive M suspension which, the automaker explains, “utilize(s) electromagnetically controlled valves which react in milliseconds to generate an infinitely variable damping force for each individual wheel.”

Their steering and braking systems have likewise been upgraded to meet M standards, and optional carbon-ceramic brakes are available. 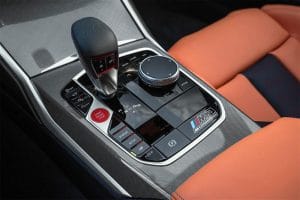 Though most buyers will opt for this 8-speed Steptronic, BMW will continue to offer a 6-speed manual for both new M models.

Customization is a key to the M packages, starting with the ability to choose between five different driving modes using the M Setup button. A separate M mode button adjusts settings for the M3 and M4 driver assistance systems, as well as the displays on the reconfigurable gauge cluster and the head-up display.

Those who want to spend serious track time may want to consider the new M Drive Professional package, an option which, says the automaker, “helps the driver to make consistent progress in pursuit of the ideal line and the perfect lap. Features include the M Drift Analyzer which records the duration, distance covered, line and angle of a drift with a rating shown on the Control Display.”

The M packages are rounded out with new interiors featuring unique colors and accents compared to the more mainstream M3 and M4 models. That includes newly developed heated M sport seats, as well as optional M Carbon bucket seats that, the automaker claims, combines track-level support with the sort of comfort needed for long-distance travel.

Look for the 2021 BMW M3 and M4 models to reach showrooms next March. Pricing will be released closer to that time.