A great midsize pickup with plenty of utility and style. 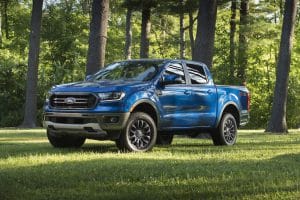 The 2020 Ford Ranger offers plenty of room and capability despite its slightly smaller than F-150 stature.

Trucks are selling strong, even in the current economic climate and midsize pickups continue to be favorites of many buyers. The midsize pickup market had all but disappeared until General Motors offers up two options and Ford followed a couple years later with its updated former compact Ranger.

The new Ranger returned amid much fanfare and some concerns it may cannibalize some F-150 sales. However, that doesn’t seem to be the case. The new Ranger is a stylish, capable model that can be upgraded to make buyers wanting a well-equipped daily driver or a powerful off-roader happy.

Overview: The 2020 Ford Ranger is definitely a step up in style and performance from its predecessor that the automaker stopped making in 2011. Admittedly, it’s a different segment, and there are no real ties back to its earlier version, which is just as well. 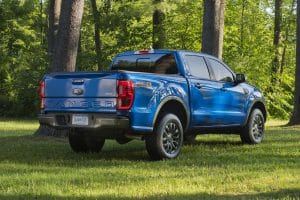 The Ranger isn’t an F-150 clone, fortunately. It’s a simple, but handsome design that makes one want to drive it off road.

The last Ranger was little more than a serviceable little truck with limited towing capability and even more limited room on the inside. However, the new model is a world away from that. In fact, it’s really not too much smaller than the full-size pickup trucks of a few decades ago, which makes it ideal for moving your college student into their dorm (assuming they attend a university that is actually holding in-person classes right now) or for simple runs to your local hardware store.

Exterior: The automaker could have simply made a miniature F-150, the best-selling truck and vehicle in the U.S. for the past several decades, and likely made folks pretty happy. Fortunately, the trucks designers did not, giving the truck its own look that is simple, yet handsome. It’s not ostentatious, it’s … well … it’s trucky. Solid, rugged even.

The rough-and-tumble look is accentuated with the Lariat trim level. Ours was in Race Red, which can sometimes make a pickup look like it should be off to a fire, but this is an aggressive red that makes look like its ready to head off road. Add in the high stance courtesy of large tires on 18-inch blacked out aluminum wheels, and the result is a good looking vehicle.