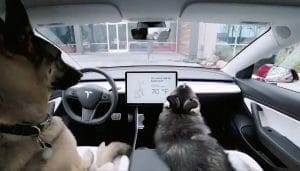 Tesla already has Dog Mode in its vehicles, but its new proposed technology is a step beyond.

Days after four children died in Alabama, Texas and Oklahoma after they were unknowingly left in hot cars, Tesla Inc. is asking the federal government for approval to use a new sensor that could help cut down on this issue.

The EV maker petitioned the Federal Communications Commission for approval to use a short-range interactive motion-sensing device that could detect children who have been left in a vehicle or have somehow gotten in on their own.

The key to the new system is an unlicensed millimeter-wave sensor not currently approved for use because it operates at higher power levels than allowed due to existing rules. Tesla already had Dog Mode, which is designed to turn on the air to keep a dog comfortable in a hot car, however, that has activated by the car owner when leaving the vehicle.

The company also has cabin overheat protection “which come on automatically at high temps to ensure any babies or pets in the car are safe,” CEO Elon Musk noted in a text last year. This new system is a step above either of those.

Tesla is asking the FCC to approve use of a sensor for a new system that could detect a if a child has been left in the vehicle.

The move comes just a few weeks after KidsandCars.org implored automakers to develop and install systems that can detect a child accidently left behind in a vehicle and prevent potential fatalities. Until recently, the U.S. averaged about 39 deaths annually attributable to kids being left or gaining access to hot cars.

However, in the last two years those numbers have seen a double-digit percentage increase, rising to 54 and 55 deaths. The group revealed new technologies that haven’t been approved or implemented yet in the U.S.

“Every day that we delay in advancing these cost-effective detection technologies means children are at risk of needlessly dying.” said Janette Fennell, president of KidsAndCars.org during the event July 28. She said automakers need to do a better job of meeting the requirements of the Hot Cars Act.

The proposed legislation was passed by the U.S. House of Representatives as part of the recent Moving Forward Act (H.R. 2). It now needs Senate approval and a presidential signature before it mandates technology that issues audio and visual warnings inside and outside the vehicle.

One of the key components the organization noted with new technology is that it needs to be able to discern between an infant or child and an inanimate object, such as a gym bag. According to Tesla, it’s device accomplishes that. The EV maker’s system would use four transmit and three receive antennas driven by a radar front-end unit. Tesla says millimeter wave radar technology has advantages over other sensing systems like camera-based or in-seat occupant detection systems. 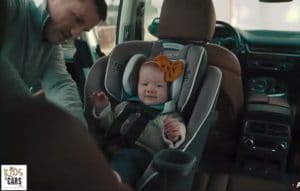 The radar-based system “provides depth perception and can ‘see’ through soft materials, such as a blanket covering a child in a child restraint.”

Tesla added it “can differentiate between a child and an object left on the seat, reducing the likelihood of false alarms” and can detect “micromovements like breathing patterns and heart rates, neither of which can be captured by cameras or in-seat sensors alone.”

There are additional benefits to radar imaging beyond potentially eliminating hot car deaths, Tesla officials note. It can assess body size, optimizing airbag deployment in a crash depending on whether an adult or child is seated — more effective than weight-based, in-seat sensor systems.

The FCC is seeking public comment on Tesla’s request through Sept. 21. According to Reuters, Tesla noted the FCC approved a similar request for Alphabet Inc.’s Google. Some automakers have systems in place as well, including Hyundai’s Ultrasonic sensor-based technology, which was introduced in 2017. General Motors which has offered its Rear Seat Reminder on all of its four-door sedans, trucks and SUVs starting with the 2019 model year as well.