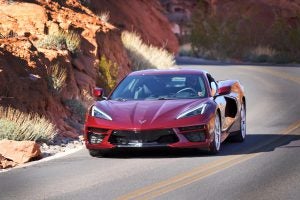 Several new Corvette owners have had the hood fly open suddenly while driving at speeds greater than 30 mph.

The eighth-generation Chevy Corvette is the first-ever mid-engine model it’s that new “frunk” that is the source of the company’s reluctant new recall for the sports car.

Nearly a dozen owners have had the frunk lid, otherwise known as “the hood,” fly up at speeds greater than 30 mph after it seemingly failed to latch appropriately. However, the title of the recall notice pretty much suggests how Chevy “feels” about the problem: Drivers May Overlook Open Hood Alerts.

“General Motors has decided that a defect which relates to motor vehicle safety exists in certain 2020 model-year Chevrolet Corvette vehicles,” the company wrote in the notice, according to TheDrive.com. 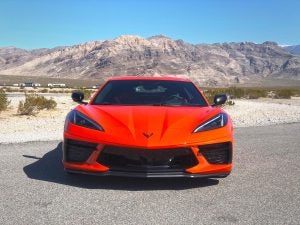 The driver now sits about a foot closer to the nose of the 2020 Corvette — making the hood flying open even more unnerving to owners.

“If drivers ignore the vehicle’s visual and audible warnings that the front trunk lid is open, they can drive the vehicle in that condition at speed, which could increase the likelihood that the wind force is sufficient to inadvertently flip open the hood.”

The company has an interim fix planned for the issue. Dealers will reprogram the Body Control Module to limit vehicle’s speed to 26 mph if the hood is not completely closed and latched, which helps with the reports that it happens at speeds greater than 30 mph.

The update will also show the driver a message indicating that the top speed is limited to 26 mph. The action will also modify the key fob to “reduce the likelihood of inadvertent hood release actuations.” The interior door trim switch and release button located inside the front trunk compartment will also be modified to require a longer press-time.

(GM shuts down new orders for the new Corvette.)

“Owners who have accepted applicable terms and conditions will have the opportunity to accept these software changes using wireless over-the-air (OTA) technology without having to bring their vehicle to a dealership. Alternatively, owners may schedule service at a GM dealer to receive these software updates.” 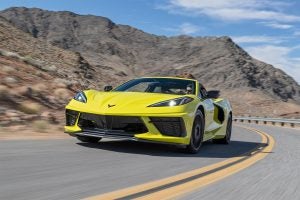 The recall on the new Corvette focuses on letting the driver know the hood isn’t latched properly.

GM hasn’t covered the costs of any damaged related to the incidents under the vehicle’s warranty, directing owners to contact their insurance companies, TheDrive reported. While there’s a solution, the vehicles that have already experienced an event gave the owners quite a shock.

“The hood popped open while driving damaging the car,” wrote one owner in their complaint to the National Highway Traffic Safety Administration. “Fortunately there were no other cars around and I was able to safely pull over. I was driving at 43 mph when the hood flew open blocking my vision and damaging the car.”

That driver also has video of the event courtesy of the car’s performance data recorder, adding that the hood had not been opened the day of the incident. The car had 1,400 miles on it at the time it happened.