Impressive manners but we want our turn behind the wheel. 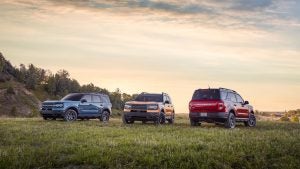 The Bronco Sport offers plenty of off-road capability in a small, but powerful package.

Some 55 years ago, Ford revolutionized the automotive market with the launch of the original Bronco, arguably the first truly mainstream sport-utility vehicle. In what was seen as a good idea at the time, Ford killed Bronco in 1996, shifting focus to the more on-road-oriented Explorer.

Today, only a handful of classic SUVs remain on the market, most buyers opting for car-like crossovers. But there’s a resurgence in classic utes and Ford hopes to ride the wave with the revival of the Bronco badge.

In this case, it’s actually an entire family, three distinct Bronco models including the truck-based two-door and four-door utes relying on a heavily modified Ranger pickup platform. They’re joined by the Bronco Sport which rides on a ruggedized version of the more mundane Ford Escape crossover. 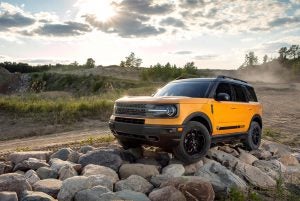 The Bronco Sport offers GOAT mode to help it get through a variety of terrain.

During “Bronco Day,” a week back, we were invited to experience all of the new models. And though, we had to settle for riding in the right seat, we nonetheless got a good first-time feel for what all three models are capable of during our visit to the new Holly Oaks ORV Park an hour north of Detroit.

This report focuses on the Bronco Sport, while Joe Szczesny hits on the more classic Bronco two- and four-door models in his own piece.

We dropped in at the Holly Oaks park on a blisteringly hot early August afternoon, dust devils sending the dry sand spinning across the facility’s parched trails. While certainly no Moab or Rubicon Trail, the facility will put even the most capable of SUVs to the test. And, after strapping in and giving my driver a thumbs-up, it became immediately clear that he had no intention of taking things easy.

A jackrabbit launch proved there’s more muscle than I expected to the 1.5-liter Ecoboost turbo-four in that particular version of the Bronco Sport, the most rugged Badlands edition.

Inside Ford, the original Bronco was often referred to as the GOAT, short for its original engineering goal: “Goes Over Any Terrain.” (Outside Ford, fans often opt for “Greatest of All Time.”) What quickly became clear is that nothing was going to stop the Sport, even without the full complement of features offered on the truck-based two- and four-door models. 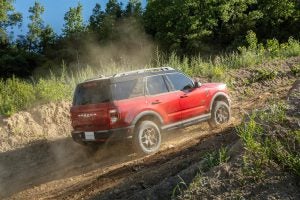 Our run in the Bronco Sport included a sprint up an 18-degree incline, that it handled with no problem.

Anyone who might think the Bronco Sport is just a gussied-up Ford Escape will be in for a big surprise, especially if they’re going off-road. The SUV remained sure-footed, whether charging into a hard-packed corner or climbing up an 18-degree hill covered in deeply rutted sand.

You do sacrifice a few features from the truck-based Bronco models, including the electronically detachable sway bar and the creeper gear, but the G.O.A.T. modes, which start at just 1 mph, should help handle just about everything short of the biggest boulders – which is one obstacle not available at Holly Oaks. Too bad, as the mode selector also adjusts steering which, in the Rock Crawl setting, is more precise and less likely to jitter. 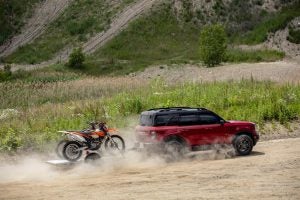 For those who plan to do relatively little off-roading, the Badlands is probably not your best choice. The tires and the stiffer suspension will definitely be noticeable on-road. On the other hand, its 8.7 inches of ground clearance – 0.8 inches higher than the other versions – is a definite plus when you’re coping with rocks, deep ruts or even heavy snow.

One plus for the Bronco Sport for day-to-day use is its independent rear suspension.

We didn’t have a chance to drive the 2.0-liter EcoBoost upgrade which offers 245 horsepower and 275 pound-feet of torque — a clear advantage when it comes to on-road performance and towing, a maximum 2,200 pounds. Off-road, however, the 1.5-liter package – at 181 hp and 190 lb-ft – is more than enough.

One last note: the models we rode in were all early prototypes, with interiors not representative of the final production versions. That said, the layout of the Bronco Sport cabin is appealing. Gauges and displays are large and easy to read.

Controls are right where you want them, some of the most important mounted on the very top of the IP. One disappointment was word that the 2021 Ford Bronco Sport would only get the automaker’s Sync3 infotainment system while the two- and four-door Broncos are upgraded to Sync4. 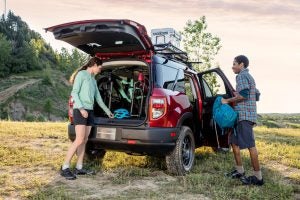 The Sport model will offer a variety of aftermarket accessories perfect for the outdoors.

Obviously, we’ll have to wait until we can switch seats to truly get a feel for what the Bronco can do – how steering and brakes feel, for starters. But it was hard not to be impressed by what we experienced riding shotgun.

And there are other appealing features, demonstrated by an assortment of Bronco Sport concepts on display at Holly Oaks. At launch, Ford expects to have at least 100 aftermarket accessories available for Bronco Sport, 200 for the bigger two- and four-door models.