Legendary Creator of the McLaren F1 rewrites the rules once again. 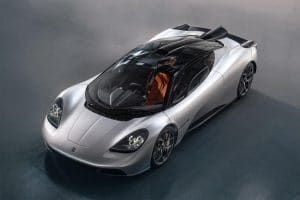 Gordon Murray’s new T.50 is the spiritual successor to his most famous work, the McLaren F1.

These days, we hear words like supercar, hypercar and ultracar routinely bandied about. And there’s no question that this has become a golden age of performance. But if you trace things back you realize they all have a common heritage, the amazing McLaren F1 that rewrote all the rules when it first hit the street nearly 30 years ago.

In today’s world, where even Detroit muscle cars are making more than 700 horsepower and 1,000 hp has become commonplace among exotics, the F1 almost seems quaint, punching out a mere 618 hp from its 6.1-liter BMW V-12. But as Gordon Murray, the man behind the F1 is quick to point out, power is just one of the many ways to measure the merits of a true driver’s car.

Murray is out to prove that, again, with the upcoming launch of his latest piece de resistance – and what he intends to be the final note of his long and legendary career – the new GMA T.50, a $2.5 million beast of which only 100 copies will be produced, starting in January 2022.

While the exterior design is significantly more modern than the original McLaren F1 – with a distinctive duct-like detail to the back end that makes it look almost like it could show up in a new Batman movie – the T.50 has a number of features in common with Murray’s previous masterwork. 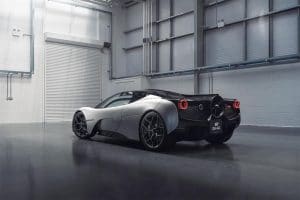 That jet-like ducting in back is used to suck out air from underneath the T.50.

For starters, it adopts the same interior layout with three seats, the driver in the middle and slightly ahead of the passengers. Power again comes from a V-12, in this case one developed by Cosworth. And the emphasis is on keeping things light and surprisingly simple. No hybrid drive or fancy advanced driver assistance technologies, Murray quickly notes.

“I drive all the modern supercars (and) what strikes me is that they’re all unbelievably capable,” the 74-year-old Brit told TheDetroitBureau.com in an exclusive interview. “But none of them gave me the F1 experience. None of them got the hair standing up on the back of my neck.”

Part of the problem is that they’re all so reliant on technologies that effectively take over much of the work while also adding lots of mass to the vehicle. Murray is of the same school as the late Colin Chapman, the founder of Lotus, whose mantra was “simplify, then add lightness.” 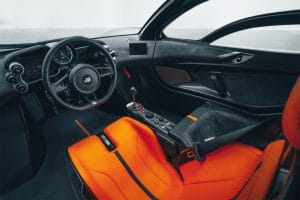 As with the McLaren F1, the GMA T.50 is a three-seater placing the driver in the optimum mid position.

The reality, Murray contends, is that “You can never make a two-ton car feel like a one-ton car.”

Also helping to hold down mass is the fact that the T.50 is a small car. At 171 inches, it’s seven inches shorter than the 911, though it is almost exactly the same width, at 72.8 inches.

Murray isn’t technophobic. The T.50 achieves lightness through the use of the latest in carbon fiber and other advanced materials. He, meanwhile, has high praise for the digital engineering systems that allowed both Cosworth and his own development team to pull the T.50 together. That proved particularly critical in light of the global coronavirus pandemic. 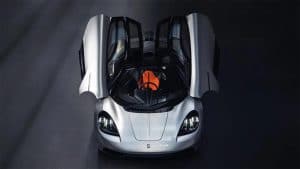 “We’ve had a few major hiccups, Cosworth shutting down for five weeks,” like pretty much everything in Britain when the virus struck. But there was “a mitigation plan to get those five weeks back,” switching to virtual design and engineering, including both powertrain development and work on the T.50’s aerodynamics.

The development team also came up with a neat trick to maximize performance from the supercar’s 4.0-liter V-12. That curious rear duct is the outlet for a 48-volt electric motor that sucks out air from underneath the vehicle, channeling it over the rear diffuser to enhance downforce. But it has a secondary benefit.

At 11,500 RPMs the V-12 can scream down the road making 654 horsepower and 344 pound-feet of torque. But in Vmax Mode, the fan creates a ram air effect, essentially boosting output to 690 hp. 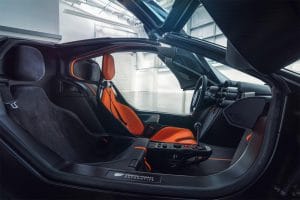 Another look at the GMA T.50 interior.

There are some interesting eccentricities to the T.50, all aimed at enhancing the driver experience. “If you have a light enough car,” he explains, “you can stick with the basics and have a car that gives you a lot of feedback. (So), over 10 miles per hour you have manual steering. You’re feeling what the car is doing. Under 10 mph we clutch in a little assistance.”

There are a few other high-tech elements to the T.50, including a pair of active rear spoilers, but Murray’s focus on keeping the driver in charge is apparent pretty much everywhere else. There’ll be the legal minimum of nanny technologies, no hands-free driving for someone behind the wheel here.

Since designing the original F1, Murray has worked on a variety of different projects for a number of different manufacturers. For his farewell effort he has created a company of his own, Gordon Murray Automotive. Bringing in investors can always be a bit tricky and he had to stare them down when it came to what he saw as an essential part of the project: minimizing the number of T.50s that eventually will roll out. It will be “strictly 100,” he emphasized. 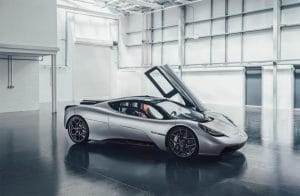 His backers had hoped for a still limited 300 at around 1 million British pounds each. As it now stands, the price will come in around $2.5 million U.S. If he had lost that battle, Murray confided, “I’m not sure I would have stayed with the program.”

Despite that hefty figure, and the fact that the start of production is still nearly 18 months away, “We’ve pre-sold more than two-thirds of the cars,” said Murray. “Totally unexpected, I thot we might sell 10.”

The good news for those with that much cash is that the GMA T.50 has been homologated for global distribution, including the U.S. market.

Wrapping up an hour-long video call with the legendary Mr. Murray, his passion for the T.50 project – and for automotive design and engineering in general – becomes readily apparent. “I’m having more fun than I’ve had at any time in my 53 years” in the business, he says. Clearly, the T.50 is turning into the sort of high note one could only hope for at the end of a long and celebrated career.