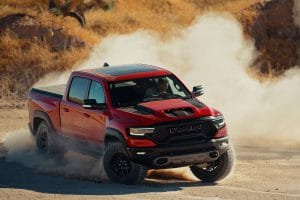 Kicking up dust. The Ram brand was the number one mainstream marque in the new American customer satisfaction study.

In a year in which everything seems to be going wrong it probably comes as no surprise that consumers are increasingly frustrated with the auto industry, a new study finding customer satisfaction has fallen to its lowest level since 1999.

Only a handful of brands found a way to keep customers happy, according to the American Customer Satisfaction Index, which reported the industry slipping overall by 1.3% this year. It was the third consecutive annual decline, and marks a significant turnaround after customers reported satisfaction levels soaring to record levels following the Great Recession.

“The drop in satisfaction was more alarming a year ago, with 21 of 27 nameplates registering ACSI declines, but this ongoing slide pulls the auto industry into uncharted waters,” said David VanAmburg, managing director at the ACSI.

(Labor Day auto sales expected to be hot with sedans the big draw.)

Exactly how the pandemic might have played into the downward performance this past year isn’t quite clear, but there is no doubt the industry struggled simply to do business this year. Factory closures have left retailers short of some of their most popular products. Dealers in many states were forced to close their doors, at least temporarily, then adapt to doing much of their business online. 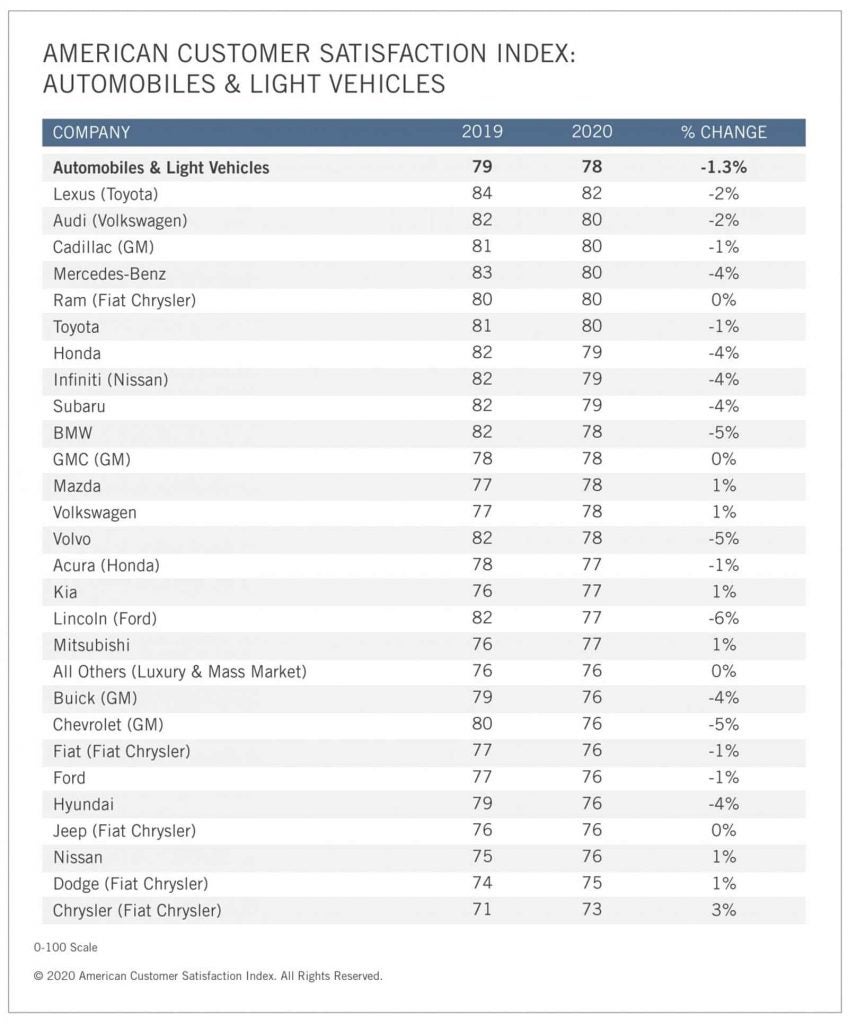 If there’s been any good news for the industry, it’s that other owner surveys, such as the J.D. Power Initial Quality Study, have indicated that the latest crop of cars, trucks and crossovers suffer from fewer problems. The IQS contained a few surprises, notably including the fact that Fiat Chrysler, normally an industry laggard, had several of its brands finish at the top this year.

Coincidentally, and perhaps surprising to some, that is mirrored by the ACSI which ranked Ram tied as its number one mainstream brand, outscoring traditional competitors such as Honda and Toyota. Ram scored 80 points out of a possible 100, just behind the study’s overall winner, Lexus. And while the score for Ram was flat year-over-year, the Japanese luxury marque saw its own score slip by 2 points for 2020.

Ram tied with Toyota which slipped a point in this year’s study.

Fiat Chrysler’s pickup brand was a relatively rare exception. It was joined by only one other domestic marque, Cadillac, in the ACSI top 10. The Japanese had five brands in that list, the Germans three.

As good as FCA did with Ram, however, its truck brand anchored this year’s customer satisfaction list, with a score of 73%. At least it was pointing in the right direction with a 3-point gain, one of only a handful of brands to improve their scores this year. 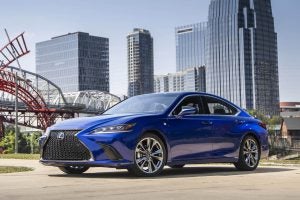 Lexus was the number one brand this year but saw its score decline.

Korean manufacturers, which have seen a big surge in quality in recent years, didn’t fare all that well in terms of customer satisfaction, Kia coming in at 77 points, Hyundai 76.

Experts warn that even with good quality, a manufacturer scoring poorly in terms of customer satisfaction needs to worry about retaining owner loyalty.

Following a combined 4.9% decline over the past two years, “automobiles and light vehicles hit an industry low not seen since 1999 and far below the peak score of 84,” said VanAmburg.

Whether manufacturers will be able to resolve their customer satisfaction problems after the pandemic will be one of the industry’s big challenges.