A Week With: 2020 Chevrolet Corvette Stingray

A year after its debut we're still in love. 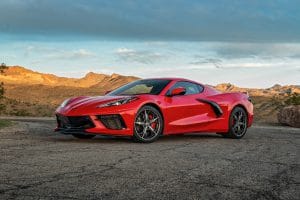 The 2020 Chevrolet Corvette Stingray is the first-ever mid-engine ‘Vette produced.

I was only seven when the show, “Route 66,” first went on the air with its second-generation Corvette  serving as the real star. But it was more likely my fascination with the iconic sports car began with the debut of the ’63 split window model that remains one of the most sought-after versions of the ‘Vette ever.

Throughout the decades, there’ve been some good Corvettes and, to be honest, some pretty mediocre ones, as well. But nothing quite matches up with the new C8. Sixty years since Zora Arkus-Duntov, the legendary “father of the Corvette,” first toyed with the idea of adopting a mid-engine design, the concept has finally made it into production.

I got a chance to drive the 2020 Chevrolet Corvette Stingray out in Nevada in February, just weeks before the coronavirus pandemic led to a near-nationwide lockdown. It was a great introduction, especially with a day of clocking laps at Mountain Springs Raceway an hour outside Las Vegas. But the real question remained: what is this incredibly capable sports car like to live with day-to-day. We finally got our chance to find out this past week. 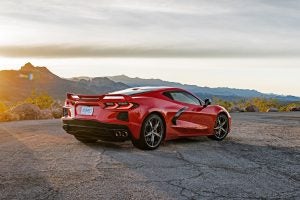 Overview: The subject of nearly a half-century of rumors, the C8, or eighth generation, Corvette finally became a reality late last year.

Unfortunately, a lengthy strike and the subsequent coronavirus pandemic set production back substantially. Even those who placed early orders may be in for a lengthy wait to take delivery. The good news: it’s well worth the wait.

Visually, the 2020 Chevy Corvette is a real treat, if a bit more European in overall appearance than the ‘Vettes of yore. No surprise, of course. Going mid-engine has completely altered the looks – as well as the overall feel once you climb behind the wheel and slip the two-seater into gear.

“… Driven aggressively, it not only makes all earlier versions seem tame by comparison but holds its own against some of the world’s best sports cars priced substantially higher. What’s perhaps more surprising, is just how well mannered the new Chevy halo car is when out for a calm cruise ….”

On paper, you’ll be able to drive off the lot with a new Corvette for under $60,000. Realistically, few, if any, buyers will do so. There are just so many desirable options, such as the Z51 performance package. Yet, even if you check every possible box, you wind up with an absolute bargain in terms of looks, power and road manners. Our test model came in at $72,075. 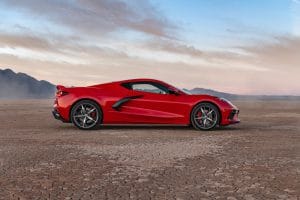 The move to a mid-engine layout changes the proportions of the Corvette.

Exterior: Even now, more than a year after the C8 made its splashy multimedia debut, it is still a head-turner. During a week of driving we routinely watched other drivers race up just to get a closer look, pedestrians rushing over to gawk and ask questions.

There are clearly some design cues to the Stingray carried over from the lovely, outgoing C7 Corvette, but the switch to a mid-ship engine layout dramatically changes proportions. You now sit more than a foot closer to the front end which offers numerous advantages, starting with better visibility, as well as a physical change in the way you feel the car go into a corner.

The overall look is more angular though less cartoon-like than the previous generation. There’s more of a coke bottle shape from the sides, the doors tucking in ahead of the dart-shaped air scoops that feed air into the engine compartment. You might wonder where the door handles are. The electronic release buttons are cleverly tucked out of sight.

From the back end, the classic round laps of Corvette past are gone, but just like the long-time pop-up headlights, there’s no reason to lament. The more slit-like lamps ride above the new rear air vents.

Of course, one of the most distinctive features is the transparent cover over the big V-8. No, it’s not unique to Chevy. Ferrari was there years before. It doesn’t matter. It’s just a joy to gaze at the new LT2 V-8. 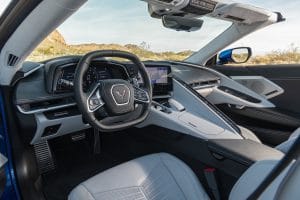 The interior of the new Corvette Stingray is very driver-focused.

Interior: The C8, without question, features the most handsome and lavishly executed cabin ever for Corvette. Like the exterior, there’s a purpose for every detail, but it just looks so much more refined and luxurious. True, it might feel a bit cramped – doesn’t any good sports car – but once settled into the enveloping sports seats on our tester, everything felt just right.

Look through the new steering wheel and you spot a digital instrument cluster which automatically reconfigures according to the driving mode you opt for. Our test model featured a large head-up display and, to be honest, we only rarely took our eyes off the road but to check the G-Force gauge to see just how we handled the last corner. A smaller touchscreen atop the center console is angled towards the driver and, along with the usual infotainment bits, features a number of performance-oriented screens.

If there’s been some controversy to the cabin layout it’s the strip of controls, almost all for the climate control system, running from front to back along the passenger side of the center console. Once one gets used to the layout, however, we found it becoming quite intuitive. It does tend to isolate passenger from driver, however.

Powertrain: Here’s where things start to sing – though there’s another point of controversy to address. 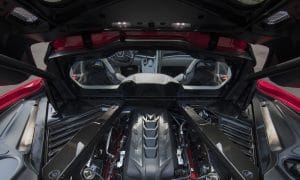 You’ll be hard-pressed to find anyone lamenting the loss of the old LT1 V-8 from the C7. It’s been replaced by the 6.2-liter LT2. It’s not a complete makeover, but it might as well have been, the new small-block V-8 getting, among other things, a new cylinder head, valvetrain, throttle body and even a new combustion chamber design. That all can be measured in the numbers. At 495 horsepower, it makes 35 more ponies than the old Corvette, with torque coming in at 470 pound-feet.

Here’s an equally impressive figure. You’ll hit 60 mph in about 2.9 seconds. That’s barely an eyeblink slower than what the C7 ZR1 could muster, even with another 260 horsepower.

Credit several factors, starting with better, grippier tires, along with the weight of the engine over the back wheels ensuring you’ll lock up that rubber faster than ever.

“… If you haven’t heard yet, there’s no manual gearbox this time around. But while purists might moan, the reality is it’s the right decision …”

But if you ask Tadge Juechter, the Corvette chief engineer, what the real breakthrough has been you may be in for a surprise: he’s quick to point to that source of debate, the new ‘Vette’s eight speed dual-clutch transmission.

Sure, you run the gears using the paddle shifter, but try as you might, you’ll never match the performance of this incredibly intuitive – and surprisingly transparent – Tremec automatic.

Technology and Safety: The all-new model has the right mix to offer from an infotainment viewpoint, a fast-acting touchscreen, Chevy latest user interface and features such as Apple CarPlay and Android Auto. 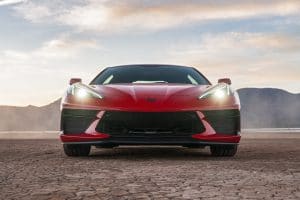 The new ‘Vette’s nose can be raised an inch, allowing it to better approach curbs and other road hazards.

As it should, however, the 2020 Chevrolet Corvette’s emphasis here is on functional technology. And, if you upgrade to the Z51 pack, there’s plenty to talk about. For one thing, there’s an electronic limited-slip differential to help you keep the car pointed where you intend, even when you charge hard into a corner or find your road surface getting a bit greasy.

Perhaps our favorite feature is the magnetorheological suspension. To sum things up, the dampers use a magnetically sensitive fluid in concert with the computer-controlled system able to switch each individual shock absorber from soft to firm, or anywhere in-between, in the time it takes the Corvette to travel just 1 inch at 60 miles per hour. What’s especially impressive about the MR system is that it works well in both worlds: on track to improve cornering and stability, while on the street it makes potholes all but vanish.

Another nice touch, quite literally, is the button on the center console that raises the nose by more than an inch. That was enough, we found out, to steer off the pavement to handle a photo session without scraping the front splitter. It also can be used to deal with speed bumps and steep driveways. Hit 25 mph and the nose automatically descends to its normal height. The system even can store locations, using GPS, so it knows to automatically raise the front end as you get home from work. 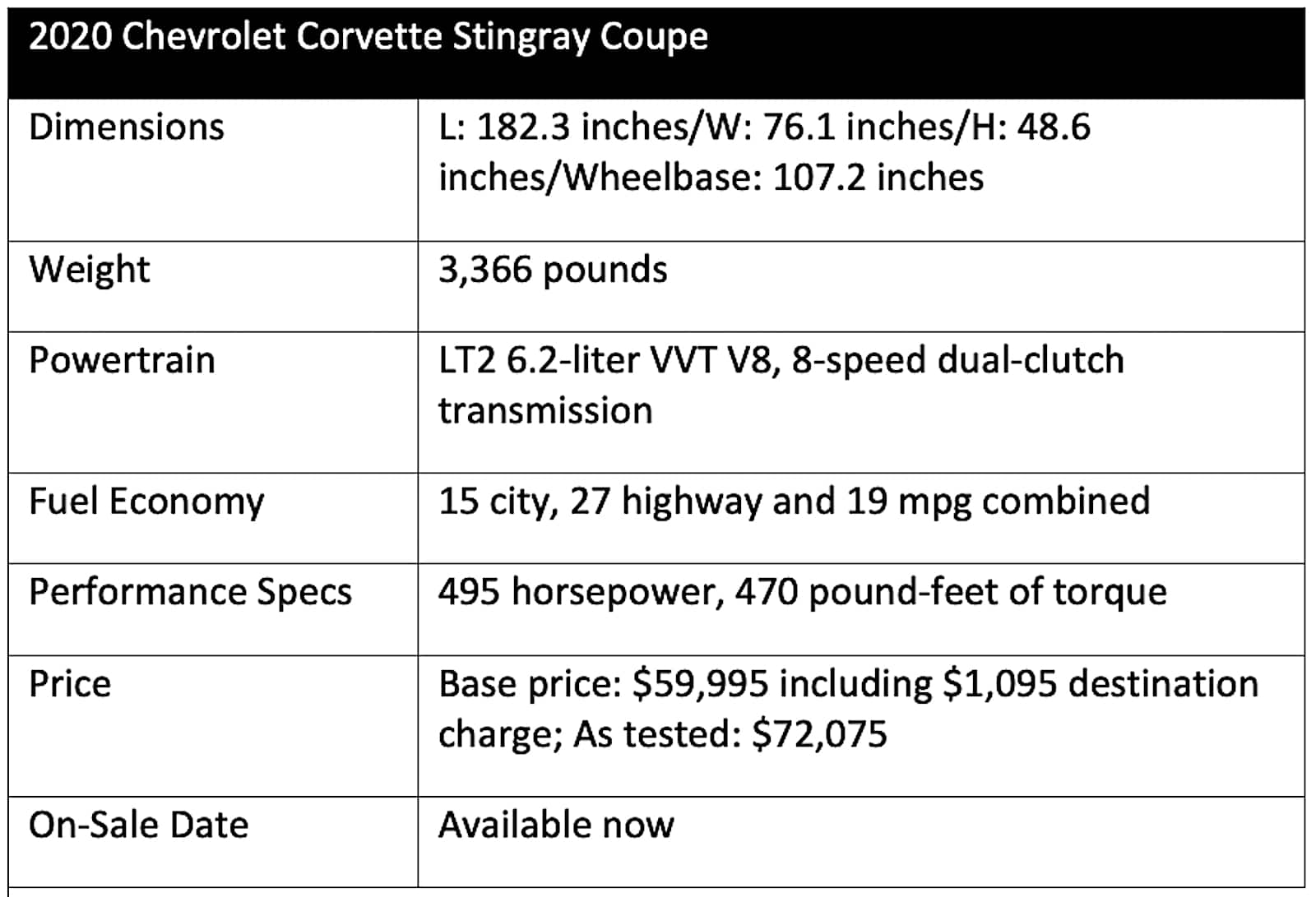 The 2020 ‘Vette features all the electronic nanny controls you’d expect. For those who want them to get out of the way, there’s a mode control that, as you step up from Tour to Track, reduces the level of intervention. For maximum performance, we simply hit the “Z” button on the steering wheel.

Drive Impressions: To get a real feel for the 2020 Corvette we went to Hell and back, Hell, Michigan, that is, where some of the best driving roads in the Great Lakes State can be found. With the Z51 upgrade, the car becomes a true, world-class competitor, taking corners that passed 1G with not the slightest complaint from the Michelin tires.

Steering proved precise and predictable, and even the roughest pavement did little to upset the suspension. As we noted earlier, sitting closer to the nose made it easier to feel precisely what the Corvette was doing at any moment, especially in hard turns.

But the biggest surprise was how pleasant the Corvette proved during less aggressive driving. The menacing roar of the LT2 V-8 was replaced by a more kitty-like mew as we wandered across town. The magnetic ride suspension actually made things seem more comfortable on Michigan’s notoriously potholed roads than many of today’s SUVs. And the lift button helped us clear obstacles, such as curbs and speed bumps, without damaging the front splitter.

Another pleasant discovery was how fuel efficient the LT2 proved to be. Not a term you expect to describe a Corvette, but sticking close to the speed limit on local roads we started seeing numbers ranging from 30 to more than 40 mpg. For its part, the EPA rates the new C8 at 15 City, 27 Highway and 19 Combined. 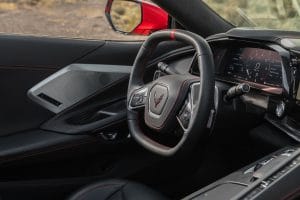 As we discovered last year driving a base version of the C8, it is pleasantly comfortable to drive around town, as well, and, while not up to a car with the Z51 option, still revealed impressive manners when you slammed the throttle or yanked the wheel.

Wrap Up: We heard a bit of grumbling when the 2020 Chevrolet Corvette was first revealed. Where was the manual transmission? Why didn’t they opt for the classic round taillights? What about the odd, arcing blade covered with climate control buttons separating driver and passenger?

These days, however, about the only complaint we still hear is the wait time for taking delivery. A friend and neighbor who has owned a long line of Corvettes, including the C7, was recently told he won’t be able to take delivery until the first half of 2021.

Worth the wait? Unless you’re set on spending a lot more money for an exotic European, the one-word answer is, “absolutely.” If anything, we were even more impressed driving the Stingray for a week than we were last year. Expect to see the usual assortment of upgrades to follow, like a Z06, ZR1 and, if rumors pan out, the ultimate Zora model. But the basic bones are there right now. The new Corvette delivers everything we were hoping for. 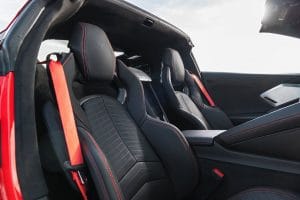 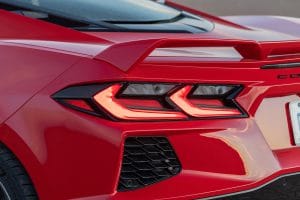