Tesla would have been a top contender but won’t release data, Power revealed.

Porsche and Dodge topped the charts according to the latest J.D. Power APEAL study which looks at the features and “positive experiences” that their vehicles offer.

The German marque ranked number one overall, as well as tops among luxury brands in the annual study. Dodge, meanwhile, was ranked number one among mainstream brands, while also coming in fourth overall. Significantly, domestic brands generally scored well in the 2020 APEAL study – and Tesla might have come in tops overall but for the fact that it restricts Power’s access to customers in 15 states.

The APEAL study – short for “Automotive Performance, Execution and Layout” – is a so-called “things-gone-right” survey, looking at how individual brands and products deliver on customer expectations, said Dave Sargent, the research firm’s president of automotive quality. That’s in sharp contrast to more traditional “things-gone-wrong” surveys, such as the Power Initial Quality Study, released a month ago.

“Purchasing the ‘right’ vehicle is influenced by a variety of factors, depending on each buyer’s specific tastes, wants and needs,” said Sargent. “The APEAL Study measures an owner’s emotional attachment to their new vehicle and in what areas that vehicle may not be delivering on all of the positive experiences that were hoped for.”

This year saw the first update of the study itself since 2013 and reflects the changing nature of the automotive market, said Sargent. For one thing, cars rarely break down anymore, so how an owners feels is more likely to be influenced by things like design and performance and, increasingly, the onboard tech features. vehicles with standard-issue advanced driver assistance systems, like forward collision warning and blind-spot monitoring, tended to get higher scores.

It has become more and more important, he added, that a vehicle be “compatible with other parts of their life, like their phone. Most consumers would rather change their brand of vehicle than their brand of phone.” Owners of vehicles with Apple CarPlay, Sargent added, tended to give their vehicles better scores.

The strong performance by Dodge in the IQS generated significant headlines. The automaker was, until relatively recently, an industry laggard. It’s likely to be the center of debate once again, scoring 872 in the 2020 APEAL study, behind only Porsche, at 881, Lincoln, at 876, and Cadillac, at 874. It nudged past BMW, with a score of 869, followed by Land Rover, Genesis and BMW. Another Fiat Chrysler brand, Ram, also pushed into luxury territory, with a score of 871,

Dodge becomes the first domestic to be ranked the number one mainstream brand on both APEAL and IQS in the same year. (It also was ranked tops overall in the IQS, another first for a Detroit brand.)

“These ratings are consistent with our continuing focus on improving the ownership experience for our customers,” Mark Champine, Head of Quality, FCA North America, said in a statement. “Our focus will not waver, nor will our efforts.” 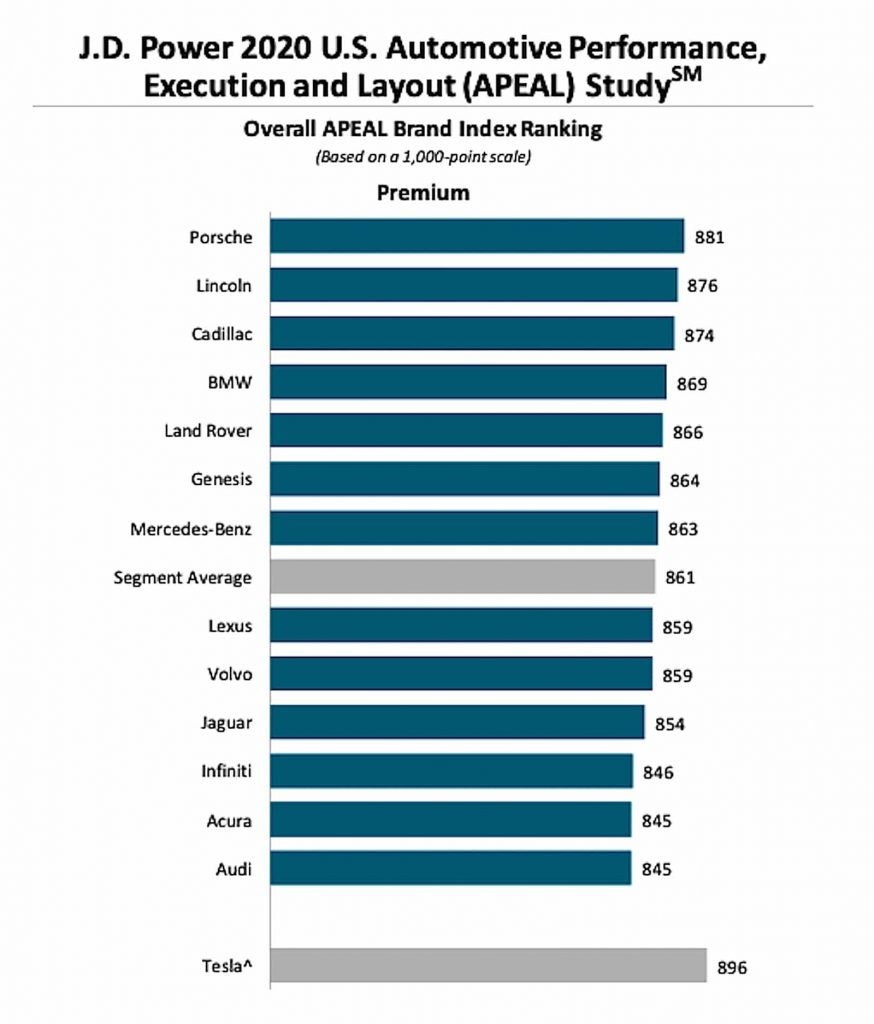 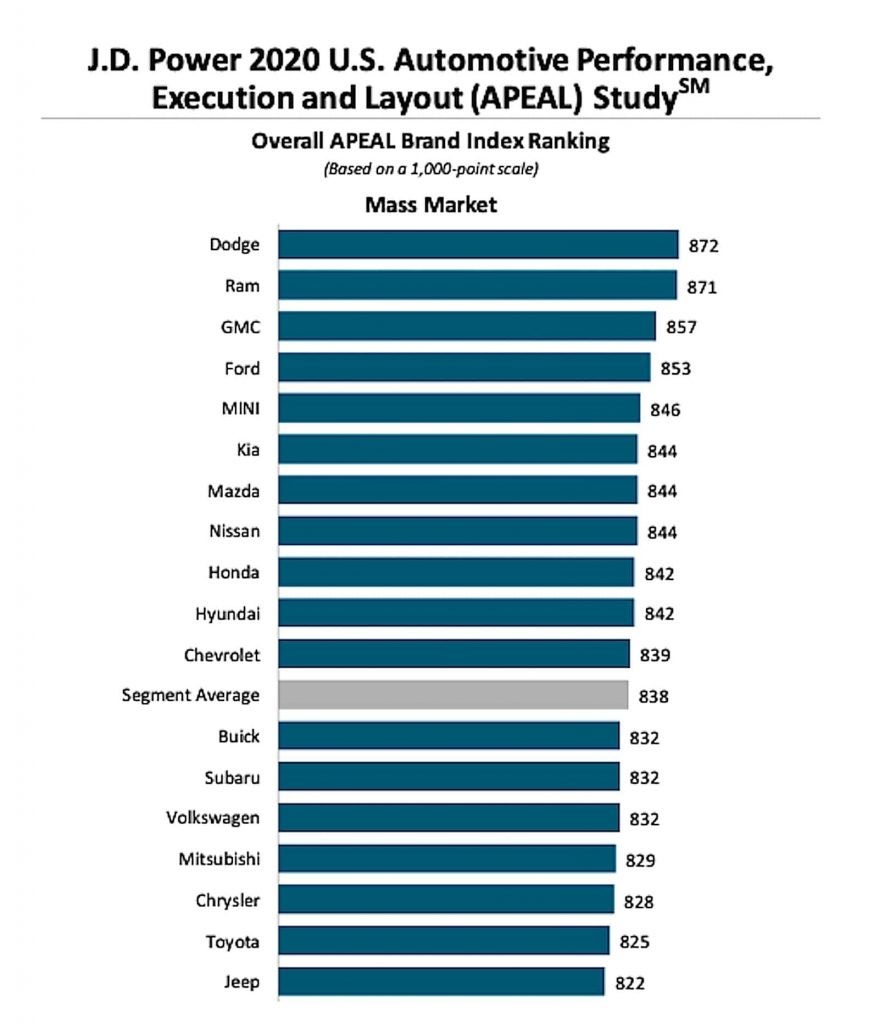 Domestic brands, in general, have been rising up the ranks in various J.D. Power studies. In the 2020 APEAL, Detroit’s two luxury marques both came in well ahead of the industry average luxury segment score of 861. Five Detroit brands were ranked above the mainstream segment average of 838. Another three domestic brands, Buick, Chrysler and Jeep, fell below average, Jeep the lowest-scoring marque among all those included in this year’s study.

Porsche, meanwhile, has been one of the top brands in both of the studies for a number of years. “They do a very very good job of giving customers exactly what they want,” Sargent said during a media webinar.

The charts might have looked significantly different, however, had Tesla cooperated with Power by providing it with access to owners in 15 states. Relying on owner data for the rest of the country, however, Power found the EV manufacturer with a score of 896 which would have put it solidly in first place.

That’s in sharp contrast to what was revealed by the IQS where Tesla’s tentative score would have ranked it dead last. The automaker has long been known to suffer significant quality problems but counters that with products that offer strongly enticing features.

Now in its 25th year, the APEAL study measures “owners’ emotional attachment and level of excitement,” a Power release noted, based on 37 different attributes, “ranging from the sense of comfort and luxury they feel when climbing into the driver’s seat to the feeling they get when they step on the accelerator.

At a brand level, Mazda posted the biggest improvement in this year’s APEAL study, climbing fully nine spots to become 7th among mainstream brands. Cadillac, which was third among luxury marques, climbed six places compared to the 2019 study.

When it comes to individual models, however, imports still dominated the 2020 APEAL. The Hyundai Motor Group – which includes Genesis, Hyundai and Kia, took five model awards. Nissan nabbed three, with BMW AG and General Motors each winning in three categories. Fiat Chrysler, Ford, Honda and Jaguar Land Rover took two model awards each. And Toyota, Mazda and Volkswagen won in one category each.

Because of what the IQS and APEAL studies focus on, said Sargent, “It is not unusual” for a brand to do poorly in one and well in another. But eight models topped their segments in both studies. These were the Audi 3, BMW X6, Cadillac CT6, Genesis G70, Hyundai Veloster, Jaguar E-Pace, and Nissan’s Armada and Maxima models.

The X6 was the single highest-scoring model in the 2020 J.D. Power APEAL study.