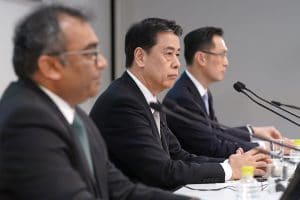 Nissan’s senior management outlined the company’s expectations for next fiscal year, including a $4.5 billion loss.

Hammered by the global pandemic, Nissan Motor Co. expects to post a record $4.5 billion loss for the fiscal year ending next March, with a full recovery likely two years away.

That would mark the second consecutive annual loss for the Japanese automaker, Nissan going $6.2 billion into the red during the fiscal year that ended last March 31. Industry analysts were expecting this year to bring another deficit, but it now looks like the loss will be substantially greater than most had forecast.

“The market outlook remains uncertain and we may see a further deterioration in demand due to a possible second wave of the pandemic,” Nissan Chief Executive Makoto Uchida said during a livestreamed briefing from the company’s headquarters in Yokohama Tuesday.

Nissan has been in a downward spiral for several years. The aggressive expansion plans implemented by former Chairman Carlos Ghosn began to fall apart even before his arrest in November 2018 on corruption charges. The problems created by overcapacity, along with an aging product line-up, were compounded by the bad publicity the Ghosn scandal has created. 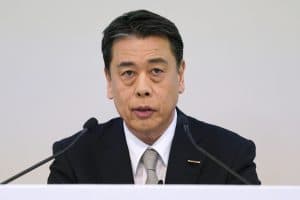 Nissan CEO Makoto Uchida said the company needs to learn from its past mistakes.

“We must admit failures and take corrective actions,” Uchida said May 28, when the prior fiscal year’s results were announced. Nissan had already taken steps to cut production and eliminate weaker product lines but put in place further cuts as it revealed its first annual loss in 11 years.

The current fiscal year is off to another bad start. The COVID-19 pandemic not only has hammered sales in key markets including, Japan, China, North America and Europe but also forced plant closures at various times in each of those markets.

The second-largest of Japan’s automakers saw global volume dip 48%, to just 643,000 vehicles during the April-June quarter, as demand slipped by 40% in China and by half in North America.

That helped drive a deficit 153.9 billion yen, or $1.47 billion, for the first quarter of its fiscal year. It reported a 94.8 billion yen loss for the period a year earlier. 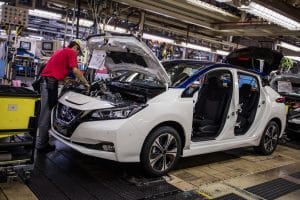 Nissan sales were down significantly on a global basis to just 643,000 vehicles last quarter.

Nissan was widely expected to go into the red for the current fiscal year, analysts surveyed by Refinitiv forecasting a consensus loss of 262.8 billion, or $2.5 billion. The company’s own forecast is almost 80% higher, at 470 billion yen, or $4.5 billion.

“Fiscal year 2020 will be a challenging year in terms of profitability and free cash flow,” Uchida said during his online announcement.

The company’s troubles will be felt by the other members of the Renault-Nissan-Mitsubishi Alliance, especially the French automaker who helped orchestrate a bailout of its partner two decades ago, because Nissan will eliminate its dividend for the year.

For its part, Mitsubishi on Monday said it also expects a bigger loss for the current fiscal year than had been forecast previously. 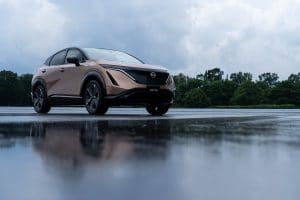 Nissan’s new EV, Ariya, will offer a standard battery or a 300-mile option.

The Yokohama-based automaker wants to trim about 300 billion yen in fixed costs by March 2024, among other things slicing 150 billion yen from its marketing, sales and depreciation spending this year alone.Ni

Despite the anticipated problems, not everything looks bad for Nissan, company officials said. They have lined up enough loans and issued enough debt to secure the company’s liquidity. And, despite ongoing concerns about the pandemic, Chief Financial Officer Stephen Ma predicted there is a “pretty good chance” that Nissan’s free cash would run positive during the second half of its fiscal year.

Perhaps most important will be the reception that new products garner. That includes the complete makeover two key nameplates have received, initial response being favorable for the Sentra sedan and Rogue SUV. Nissan also is readying the all-new Ariya, its second battery-electric vehicle. Unlike the current Leaf hatchback, Ariya will target the potentially larger SUV market.

Even with the boost those new models could give, Nissan CEO Uchida warned that, “It’s going to be a very challenging year.”