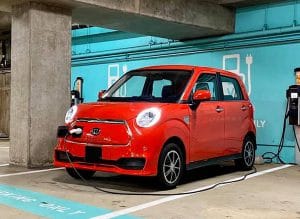 Kandi’s K27 model can be had for as little as $12,999 after federal government incentives, the company claims.

Companies big and small have been touting “affordable” electric vehicles for years, and in the near tsunami of new models set to arrive on U.S. shores in the coming years, “affordable” doesn’t seem to be the descriptor one would attach to any of them.

However, that may be changing with a new player in the segment promising a $12,999 EV – after the $7,500 federal tax credit – and a delivery date of later this year.

Texas, Kandi Technologies Group Inc. says it will deliver this very affordable battery-electric vehicle starting later this year with the first market getting the new cars being the “Dallas metroplex.” 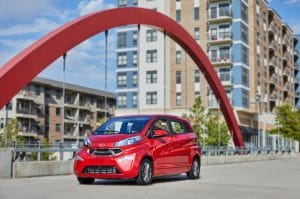 Kandi’s K23 is the new EV company’s top-end vehicle that it plans to sell in the U.S.

“Electric vehicles have been valued for years for their efficiency, sustainability and innovation,” said Johnny Tai, CEO of Kandi America. “However, owning the ‘it’ car often eluded consumers who desired a great EV alongside all the other comforts of modern living.

“Kandi changes that and revolutionizes the EV-buying experience for many. “At Kandi, we are on a mission to make electric cars accessible for all. With these first two models, we are starting an Auto EVolution that will allow anyone, regardless of their financial status, to afford a reliable, high-tech EV.”

The company plans to show off the new model at an online event Aug. 18 at 10 a.m. It’ll show two models, the K27 and K23. The lower the number, the higher the price for the vehicles, and one can only assume the better the vehicle.

The K27 comes in at $12,999 after federal tax credits, the company says. It’s a compact model with enough interior space to accommodate up to four passengers, Kandi officials note. It’s powered a 17.69 kWh Lithium battery with a driving range up to 100 miles, making it an ideal automobile for urban driving. 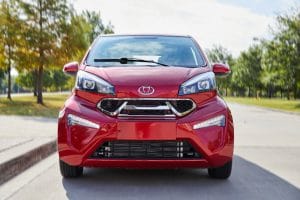 The K23 can travel up to 180 miles on a single charge, the company claims.

For those in the market for a larger vehicle with more trunk space, the K23 is an affordable option at $22,499 after federal tax credits. The size of a small SUV, this model includes a 41.4 kWh Ternary Lithium battery and a driving range of more than 180 miles.

After the kickoff, the company will open the pre-sales process, allowing customers to put a fully refundable $100 deposit down for models K27 and K23, which will be available for delivery in fourth quarter 2020.

(Fisker confirms four models in the works by 2025 – including all-electric pickup truck.)

Headquartered in Garland, the company designs and builds its vehicles in China, and distributes the vehicles through SC Autosports, LLC, a Kandi Technologies subsidiary. SCA distributes Kandi electric cars through its high-end dealerships nationwide so consumers can receive great service and prompt support from their local dealership.