Get a Limited-Edition Bugatti for as Little as $35K 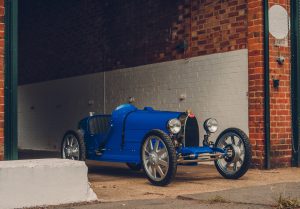 Some of Bugatti’s Baby II replicas have become available due to the difficult economic times.

Antique Bugatti fans with teenagers, be they children or grandchildren, are getting a second chance to scratch a $35,000 itch.

During the 2019 Geneva Motor Show, Bugatti decided to mark its 110th birthday by producing a replica of the Bugatti Baby. And, to paraphrase a famous line from a now decades-old Kevin Costner movie, if you build it, they will buy it. And they did — all 500 of them.

To paraphrase another Kevin Costner movie, this one more recent, we live in a different world than we did 400 days ago. There was no Geneva Motor Show this year due to the pandemic and that has also meant that some of the folks who committed $35K or more for a really cool looking Bugatti go kart, no longer have $35K to spend on such frivolities.

However, the ultra-premium car maker is committed to a production run of 500 of the Baby II so they’re looking for new buyers, or as the company puts it, “a very few build slots have become available and will be allocated on a first come, first serve basis.” 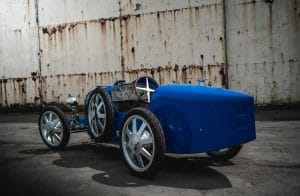 The all-electric model is capable of a top speed of 42 mph and a range of about 15 miles.

The original Bugatti Baby – a scaled-down Type 35 – was born in 1926 for Ettore’s grandson was a supposed to be one-and-done vehicle. However, the car proved to be so popular they put it into production from 1927 to 1936. About 500 of the cars, about 50% of the size of the original, were made during the 10-year run of the vehicle.

The new model, which is a bit larger at 75% of the original Type 35, was developed in partnership with The Little Car Co. Bugatti officials noted the Baby II has been described as “more of an unruly teenager than a Baby.” That’s because when the all-electric model is completely tweaked out, it has a top speed of nearly 45 mph, and will get there in a little more than six seconds.

Eight-year-olds would struggle to fit in the original half-scale Baby, the company notes, whereas at 75% scale and designed for ages fourteen and above, the Baby II has definitely become more of a young adult. Given the potential speed of the new version, the high-speed model is definitely suited to someone a little older.

The Bugatti Baby II is available in three versions:

The Vitesse and Pur Sang versions include the Novice and Expert driving modes, but also offer extra performance from an upgraded powertrain, unlocked by the legendary Bugatti Speed Key. This pushes power to 10kW or 13.4 bhp. With an all up weight of just 230kg, the pair will likely spin their rear Michelin tires from standstill, on the way to a 42 mph top speed. Range on the lithium-ion batteries is about 15 miles.

“Ettore Bugatti himself was already interested in catering to the children of Bugatti enthusiasts and designed the Type 52 miniature car as a genuine Bugatti. That was a sensation at the time,” said Stephan Winkelmann, president of Bugatti. 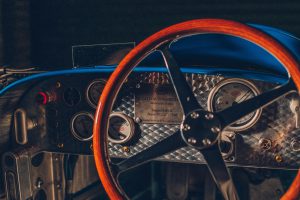 “We are continuing this tradition with the new edition of the Bugatti Baby II, and I am delighted that we have found The Little Car Company, a partner that shares the same values as us. With the Bugatti Baby II, we invite a young generation of enthusiasts to fall in love with the wonderful world of Bugatti.”

Owners have their choice of multiple colors for the exterior and interior, including the exact same solid shades available on the Bugatti Chiron, and an online configurator is available to play with on the BugattiBaby.com website. The car also comes with some of the perks that all Bugatti owners enjoy, including membership of The Little Car Club and the Bugatti Owners’ Club, and be able to attend events where they, their children and grandchildren can drive their cars at famous motor racing circuits.