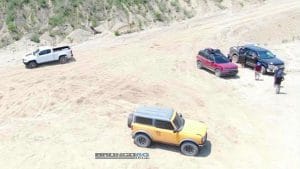 Fan site Bronco6G.com caught spy shots of the two-door version of the Ford Bronco in testing.

The long-awaited Ford Bronco will make its debut a week from today – but when it does, the Detroit automaker actually plans to reveal three separate versions of the SUV, part of what will serve as a standalone “sub-brand,” company officials revealed during a limited-access briefing ahead of the formal July 13 reveal.

Buyers will have their choice of a classic two-door version, a new four-door design or the smaller Bronco Sport, confirmed Mark Grueber, who will serve as marketing manager for the new Bronco brand.

“We’ll start with the three models we have,” Grueber said, responding to a question from TheDetroitBureau.com. “But we will continue to look at where we can satisfy customers and how to continue to expand the brand in the future.”

The Bronco has been building significant buzz in recent months, the nameplate now one of the top vehicles being searched for on Google, even though it hasn’t been in production since 1996.

In leaked photos, the new full-size Bronco certainly looks like its ready to head off road.

“America has a real, fond memory of the Bronco name,” Mark LaNeve, Ford’s director of sales, service and marketing, told TheDetroitBureau.com in an exclusive interview. The nameplate, he said, has “great heritage” that will make it easy to bring back, despite that long absence.

Ford is holding back most of the details on the 2021 Bronco line-up until the evening of July 13 when it plans to stage a multimedia spectacular in a bid to grab maximum attention for the new line. It is pairing up with Academy Award-winning director Jimmy Chin who has put together three short films, one on each of free Disney properties, the Disney Channel, ESPN and National Geographic, the same time Ford’s own website will webcast the Bronco unveiling. Hulu will follow with those films and other material.

(When you wish upon a car? Ford teaming up with Disney for Bronco debut.)

Ford has so far released only meager teaser images, but spy shots and a handful of leaked pics have given the world a clear sense of what it has coming. The 2021 Bronco models will clearly pick up on the original SUV’s ruggedly boxy design, the Sport offering a slightly more modern take. All models, meanwhile, will feature all-wheel-drive, unless many of today’s utility vehicles where that is an upgrade option. 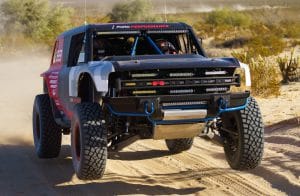 The Bronco Type R racer clearly hints at what the production SUV will look like.

While there have been some questions about the capabilities of the Sport model, “We didn’t just put a badge on it,” said Grueber.”We engineered it to be extra capable.”

The new Bronco family aims to directly target both the Jeep and Land Rover brands, rather than the less capable crossovers that now dominate the U.S. market. All three models, including the Sport, are designed to take on the most rugged trails an owner could imagine attacking, said Dave Pericak, the head of the automaker’s Ford Icons unit.

At the same time, stressed Pericak, the new Bronco models have been engineered to serve as daily drivers. “They are very capable at high speed running, very much capable at rock crawling and everything in-between,” he said.

The automaker will use the tagline “Built Wild” to promote the three new Bronco models which will start rolling into showrooms later this year. Dealers will be encouraged to set up separate display areas for the new line so the new SUVs are clearly separated from more conventional Ford CUVs like the EcoSport, Escape, Edge and Explorer. 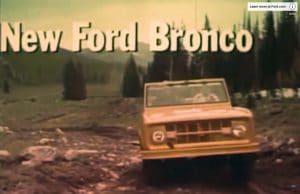 The new Bronco will take on many of the characteristics of the original model.

That said, LaNeve noted that the Detroit automaker won’t try to complete disguise Bronco’s roots. The connection to Ford might be downplayed, but it won’t be ignored.

To underscore the capabilities of the new Bronco line, those who buy either the two- or four-door models — as well as the Badlands version of the Sport model — will get, as part of the package, access to one of the Bronco Off-Roadeo “experiences” Ford plans to launch in 2021. Unlike the Jeep Jamboree, these will operate out of four fixed locations around the country. Everything but transportation costs will be included. (Other Sport owners can pay to attend one of the events.)

Ford officials are confident the reborn Bronco will click with potential buyers in a market that has rapidly shifted from passenger cars to utility vehicle, the new “family” targeting what they believe will be a solid niche for those who want true off-road capabilities.

And though some analysts have questions how well new products coming out over the next six months might fare considering the hit the U.S. market has taken from the coronavirus pandemic, Grueber said he believes this is “a fantastic time” for the Bronco to launch. One reason, he said, is that potential buyers are looking for a way to get back out after months of lockdown, and may see going off-road as a safe way to have fun.

Ford is also tying up with an independent group to set up an online fan site, TheBroncoNation.com, that will offer tips, merchandise and experiences for owners and potential buyers. 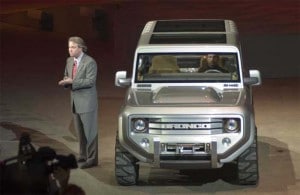 Ford has been toying with a Bronco revival for a number of years, teasing concepts like this one.

(Ford delays production of Mach-E, Bronco by two months due to COVID shutdown.)

Company officials declined to discuss what other products might be added to the Bronco family in the future, LaNeve saying only that, “We’ll be able to take advantage of market opportunities where we see them.”

There’s been speculation that Bronco might get some sort of battery drive technology. That is not in the immediate offering, it turns out, but with Ford in the midst of an $11.5 billion push into electrification, Pericak said -“We r clearly leaning into electrification in a big way.”

That would make sense considering Jeep is already using a mild hybrid system on the Wrangler and CEO Mike Manley recently confirmed a plug-in hybrid version will reach market in 2021.

“We are looking hard to apply that technology where we think it makes the most sense” initially, such as the all-electric Ford Mustang Mach-E and Lincoln Aviator plug-in, Pericak said, and “then apply it to where we think it fits into other areas of the portfolio.”

(This concept could be Toyota’s answer to the new Ford Bronco.)