Ford Gets Approval for Deferral on DOE Loan Payments

Automaker plans to pay off loan on time in June 2022. 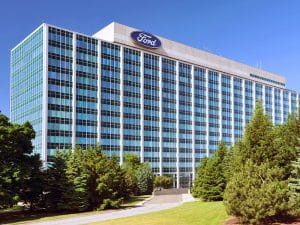 Ford received approval from the U.S. Department of Energy to defers some of its payments on a $5.9 billion tooling loan it received in 2009.

The sun continues to shine on Ford, the automaker revealing Friday it received approval to defer some quarterly payments due on its U.S. Energy Department retooling loan. The automaker noted it will repay the loan on time by June 2022.

Ford was awarded a $5.9 billion low-cost government loan in September 2009. It was part of a package of funding offered by the federal government – in the form of loans – aimed at helping automakers and other manufacturers recover from the Great Recession.

The news comes just a day after the automaker reported a net profit during the second quarter of $1.1 billion when most automakers – Tesla being the biggest exception – have been reporting losses due to the impact of the pandemic.

The loan, which has a remaining balance of $1.26 billion, was modified last month to reduce quarterly principal payments from $148 million to $37 million.

An Energy Department spokeswoman told Reuters “the flexibility the Loan Programs Office was able to provide through this loan modification is a good example of what (Energy) Secretary Brouillette meant when he asked for all of the Department’s resources to be supportive of the energy industry during the COVID-19 pandemic.”

The deferral does come with some conditions. The automaker cannot pay a dividend or repurchase shares above a certain price. If either happens, the original payment schedule will be reinstated.

The company told Reuters Friday that “deferring a portion of the principal until the maturity date will also result in incremental interest cost to Ford, in addition to the cost to modify the loan. All costs associated with the modification were covered by Ford through a higher interest rate.”

But it added, “the financing remains very cost-effective.”

The company has proactively – like so many other automakers – moved to bolster is finances, especially its cash position, to ride out the pandemic. Ford’s second quarter results, which were better than expected shows the company isn’t just sitting on its cash.

Ford said in its earnings report Thursday it repaid $7.7 billion of an outstanding $15.4 billion on its revolving credit facilities, and also extended $4.8 billion of its three-year revolving credit lines. The company ended the quarter with more than $39 billion in cash, some of that due to the draw down from the credit lines. The company’s almost $40 billion in liquidity today is expected to be sufficient to maintain or exceed a target cash balance of $20 billion through the second half of this year.