No more plain vanilla, especially when the when is blowing through your hair. 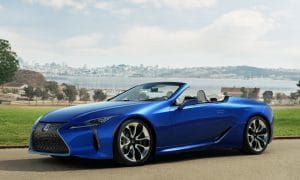 The 2021 Lexus LC 500 convertible is a stunning mix of style and performance.

Hard to imagine but the Lexus brand has now been around for more than 30 years and has proved that the Japanese can go head-to-head with anyone when it comes to delivering the sort of features luxury buyers expect.

That’s something parent Toyota’s CEO Akio Toyoda set out to solve when he declared that future Lexus products would amp up the “passion” quotient. 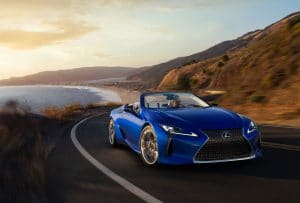 The new 2021 Lexus LC 500 convertible etains the sumptuous shape of the hardtop model while making it easy to drive al fresco in a matter of seconds.

Overview: The implementation of that mandate became readily apparent with the debut of the Lexus LC during the 2018 model year. If anything, the emotional factor is heating up with the addition of the 2021 LC 500 Convertible. Where some cabriolets can be awkward in appearance, the LC ragtop retains the sumptuous shape of the hardtop model while making it easy to drive al fresco in a matter of seconds.

The new convertible is an instant head-turner, quick to draw admiring smiles and thumbs up from other motorists and pedestrians. It’s also plenty of fun to drive, whether the top is up or down, though it doesn’t quite deliver the sharp sports car performance and handling of some key competitors.

Exterior: As you’d expect of any of today’s Lexus products, all LC models feature the signature “spindle” grille, here in an intriguing mesh pattern. It’s framed by cats-eye LED headlamps and a crisp crease that appears to be pinching the center of the grille. The steeply raked windshield adds to the sense of motion, even when the LC is parked. And subtle air scoops behind the doors build the visual sense of performance. 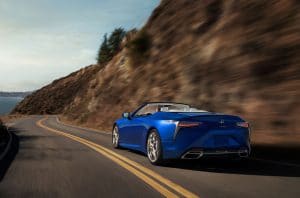 “The LC Convertible’s soft-top design features an innovative folding mechanism that includes a tonneau cover for when it is stored,” a statement from Lexus explains.

“The design allowed engineers to focus on accentuating the sleek lines of the convertible without significant intrusions to the trunk and cabin space that can come with a heavier, bulkier hard top.”

There are a handful of changes made to the convertible, including a slightly kicked-up trunk lid, while the rear spoiler is broadened to emphasize the width of the LC. The rear high-mounted stoplight also has been relocated – as is common with ragtops,

… The softtop itself is a four-layer design that helps reduce noise when closed. It can be opened with a single touch in just 15 seconds, with it taking one more second to put it back up. The ragtop can be operated at speeds up to 31 mph …

Interior: Ostensibly, the 2021 Lexus LC 500 Convertible is a four-seater. Conceivably, you could put a few adults in the back – though don’t expect to remain on speaking terms afterwards. A couple kids? Perhaps, but the back is really more of a parcel shelf and there, as much as anything, because true two-seaters are penalized by insurance companies. Oh, and you’ll need the extra storage space when traveling because 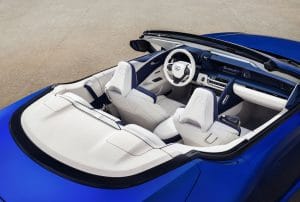 The cabin also is lavishly outfitted and precisely executed, both hallmarks of the Lexus brand.

The good news is that there’s good room for those sitting up front, and both seats offer extensive power-operated settings.

The optional sport seats in our test vehicle were nicely bolstered so you stay comfortably in place during even the most aggressive maneuvers.

The cabin also is lavishly outfitted and precisely executed, both hallmarks of the Lexus brand. The layout emphasizes the horizontal, accentuating the width of the cabin. To give it a subtle, cockpit-like feel, there is a divider rising out of the passenger side of the center console which includes a grab handle.

Lexus wants to encourage buyers to keep the top down as much as possible with a “Climate Concierge” featuring an “Upper Body Heating” system that automatically adjust the climate control, seat, steering wheel and neck heaters to keep things comfortable at all time. The system even adjusts automatically to blow hot or cold air, when necessary, to the driver’s hands as they grip the wheel.

The LC 500 offers a broad array of options. Some of our favorite include the semi-aniline leather upgrade, along with the 13-speaker Mark Levinson stereo system that may have you going out to the car t 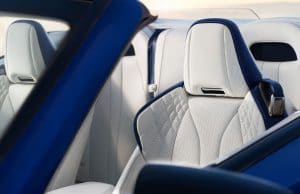 Lexus wants to encourage buyers to keep the top down as much as possible with a “Climate Concierge” featuring an “Upper Body Heating” system.

o listen to your music.

Powertrain: In coupe trim, Lexus offers two powertrain packages for the LC 500, starting with a reasonably peppy hybrid, distinguished as the LC 500h. The gas-electric driveline isn’t offered on the convertible, however. It comes solely with the LC 500’s 5.0-liter engine. It’s classic muscle, no slick turbos or superchargers, just a big V-8 making 471 horsepower, 398 pound-feet of torque – and a delightfully rich and resonant exhaust note, especially when shifted into sport mode.

… The V-8 is mated to a smooth and quick-shifting 10-speed automatic and, like the coupe, power  continues to be directed only to the back wheels …

Fuel economy is on a par with similar products, the 2021 Lexus LC 500 Convertible getting 16 mpg City, 25 Highway and 19 Combined, according to the EPA. Our own experience was a little less generous, though we also spent a lot of time with the throttle tipped in. 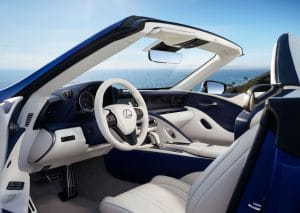 The LC 500 is laden with plenty of technology, including a 10.3-inch touchscreen controlling its Enform infotainment system.

Technology and Safety: To start with, what you get with the LC 500 Convertible largely mirrors what you find in the coupe, including a 10.3-inch touchscreen controlling its Enform infotainment system. For 2021, the automaker added Android Auto, Apple CarPlay and Amazon’s Alexa voice assistant.

Drive Impressions: Setting aside the short-lived Lexus LF-A supercar, from a driver’s perspective, the 2021 LC 500 is the most sporty and exciting product the normally staid brand has yet produced. The menacing roar of its V-8 alone provides quite a thrill when you mash the throttle to the floor.

The reality is that the LC 500, in all three incarnations, is more grand tourer than true sports car. If you’re a real performance fan, it helps to opt for the Performance package which adds such useful features like variable steering and adaptive rear-wheel steering.

They can’t completely overcome the fact that the chassis is nowhere near the stiffest and most well-planted in the segment, but they will add to the thrills for all but the most serious sports car fans.

Wrap Up: There are plenty of reasons why Lexus has, over the past three decades, grown 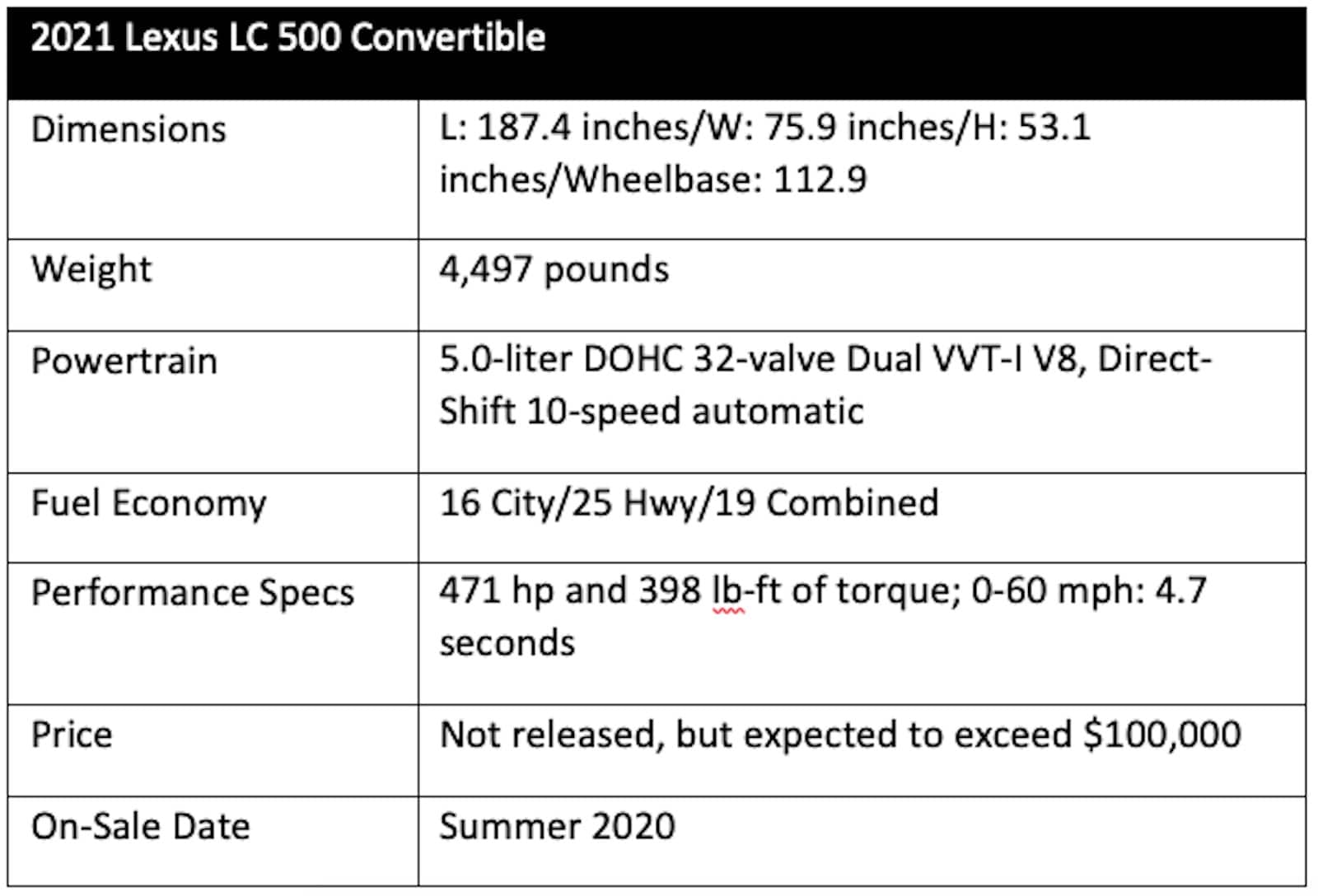 to become one of the most successful luxury brands on the U.S. market. There also were some obvious reasons why it wasn’t on the consideration list for many a high-end buyer.

The arrival of the LC coupe in 2018 changed the equation. It features a strikingly appealing design – as long as you’re good with the controversial Lexus Spindle Grille – lots of power and solid road manners. It may not be sportiest of sports cars, but only the most extreme performance fans are likely to quibble. 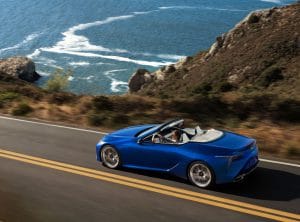 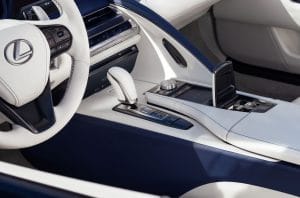 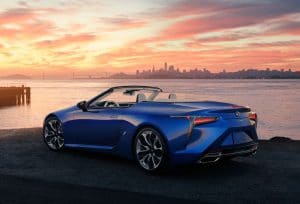