Fiat Chrysler reported a $1.24 billion loss during the second quarter, which was better than expected.

Fiat Chrysler Automobile N.V. financial results were “significantly” better than expected during the second quarter despite the losses the company suffered as its shipments to dealers dropped by two-thirds due to the impact of the COVID-19 pandemic

“Our second quarter showed that decisive actions and extraordinary contributions from our workforce enabled FCA to contain the impact of the COVID-19 crisis,” FCA CEO Mike Manley said in a statement that accompanied the financial results.

“While the company remains vigilant about the health and safety of employees, our plants are up and running, dealers are selling in showrooms and online, and we have the flexibility and financial strength to push ahead with our plans.”

FCA Chief Exec Mike Manley said quick action and “extraordinary contributions from our workforce” blunted the impact of the pandemic on the business.

However, the company declined to offer any guidance for the second half of the year because of the fluid market conditions around the world.

Although the entire company posted a loss, the news was brighter for FCA’s North America operations, which turned a small adjusted EBIT profit of 39 million euros, or $46.2 million, during the period, FCA said.

Manley said the “successful and safe” restart of production in the closing weeks of May, together with cost-control actions, yielded positive results for North America. Additionally, U.S. consumer demand exceeded expectations and FCA improved U.S. retail market share in the quarter. 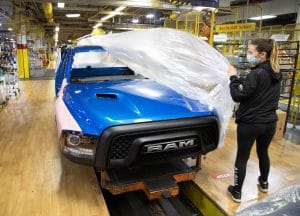 Employees at the Warren (Michigan) Truck Assembly Plant remove a protective cover from a Ram 1500 as production operations restart.

In addition, Dodge became the first domestic brand ever to achieve a No. 1 ranking in the annual J.D. Power Initial Quality Study. In the company’s Latin America region (LATAM), FCA led the industry in vehicle sales for the first time, finishing the quarter with a market-leading share of 15.9 percent.

Driving the performance was the Brazil market where the Group reached an industry-leading market share of 19.8%, amid strong consumer demand for the Group’s pickup trucks and SUVs.

The all-new Fiat Strada had its commercial launch at the end of June and is showing strong demand.

The EMEA region’s manufacturing facilities steadily came back online during the quarter. As the consumer market continues to recover, much of the group’s focus has shifted to the highly anticipated electrified vehicle introductions of the “Made in Europe” Jeep Renegade and Compass “4xe” PHEVs with production started in the quarter, as well as the all-new full electric Fiat 500 to start, in the third quarter. During the quarter, Maserati teased the introduction of the new Ghibli Hybrid with select images in anticipation of the vehicle’s worldwide debut in July, FCA said.