Hellcat SUV will be available only for 2021 model-year. 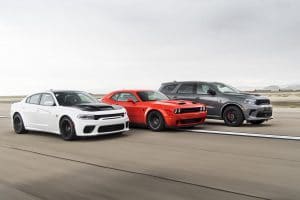 Dodge will continue its shift from mainstream to performance brand for the 2021 model-year, dropping both the Caravan minivan and Journey SUV, while increasing the power for its three remaining models, and adding a limited-run Hellcat version of the Durango sport-utility vehicle.

“We want to distill the Dodge brand to (focus only on) our core performance vehicles,” said Tim Kuniskis, head of passenger vehicles for FCA North America, said during a media backgrounder. The three products that will remain in the Dodge line-up, he added, “can go from cool to crazy with just a single check of the order box.”

The phase-out of the Caravan and Durango models will be countered by the addition of new variants of the three performance models Dodge will now focus on. 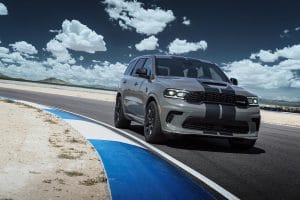 This will be the first time Dodge offers a Durango Hellcat – but only for the 2021 model-year.

The biggest news is the addition of a Durango Hellcat which, like the Charger and Challenger versions, will be powered by a supercharged 6.2-liter V-8 that can punch out 710 horsepower and launch the SUV from 0-60 in a mere 3.5 seconds, while shooting through the traps at the end of a quarter mile in just 11.5 seconds, with a top speed of 180 mph.

For those who might want to put that power to other purposes, the Dodge Durango Hellcat also will be able to tow a trailer of up to 8,700 pounds.

“Our goal was to deliver a three-row, aggressive hemi muscle car,” said Kuniskis, though he quickly added, “there is a catch. It is only available for the 2021 model-year.”

Available only in rear-wheel-drive form, the Durango Hellcat will go into production early in the 2021 calendar-year and while there are no hard sales targets, FCA officials noted they will be able to produce a maximum of around 2,000 of the high-performance SUVs.

(What did it take to top IQS? FCA’s quality chief offers inside insight.) 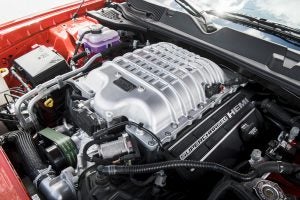 For those who want a more traditional muscle car, Dodge plans to continue expanding the options available with its other two models.

That includes the first Redeye version of the Charger. The upgraded version of the four-door will now feature an 807-horsepower version of that supercharged 6.2-liter engine. The goal was to take “your daily passenger car” and let it do double duty on track, suggested Kuniskis, noting the 2021 Dodge Charger Hellcat Redeye will manage 0-60 times “in the mid-3s,” will running the quarter-mile in “the mid-10” range. Top speed on the Redeye model will jump to 203 mph.

Along with the engine upgrade, the 2021 Dodge Charger Hellcat Redeye will get a new hood featuring both a functional air scoop and new heat extractors.  There’ll also be new 6-piston Brembo brakes with two-piece rotors up front.

All that power can be difficult to put down to the pavement. Dodge is attempting to address that problem 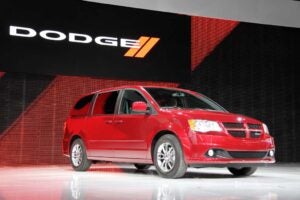 The last of the mainstream Dodge models, the Journey and the Caravan (shown here) will be phased out in 2021.

with an upgraded version of its track focused Challenger SST Super Stock, the 2021 not only getting a 10 hp boost, to 807, but also getting upgraded 18×11 drag radials. The upgrades should help pick up a full three lengths in a quarter mile, FCA officials said, crossing the traps in 10.50 seconds. Meanwhile, the Super Stock also will get upgraded Brembo brakes to scrub off all that speed.

Other updates for 2021 will see the Charger and Challenger get revised instrument panels and new technologies including the latest version of the Uconnect infotainment system.

The addition of the new models comes barely after Dodge got some spectacular news from J.D. Power. The brand was named number one in its closely watched Initial Quality Study, a measure of the “problems” owners face with their vehicles during the first 90 days of ownership. Long one of the industry laggards, Dodge has shot up the charts over the last several years – and the 2021 IQS not only found it leading traditional quality leaders like Lexus and Genesis, but becoming the first Detroit brand ever to top the study.