Striking looks, lots of standard features, but there are some sacrifices. 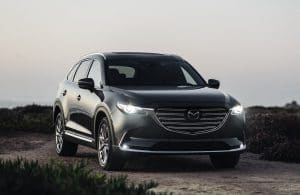 The 2020 Mazda CX-9 Signature is a great example of the company’s knack for building drivers’ cars.

Mazda has a long tradition of building drivers’ cars. They may not be the fastest or most powerful vehicles in their class but, like the little Miata, they’re just fun to run around in. The little Japanese automaker also has a knack for distinctive styling, its latest Kodo design language adding a certain flair to entries in the most commoditized product segments. And the 2020 Mazda CX-9 is a great example.

Overview: Today’s CUV market has become incredibly competitive, the larger, three-row segment featuring an array of domestic and import offerings including the Volkswagen Atlas, Hyundai Palisade, Kia Telluride and Honda Passport. The Mazda CX-9, while carrying a slightly higher base price than many of those alternatives, is easily the most striking entry from a visual perspective, and it offers a number of other pluses that should have buyers checking it out.

That said, there are some drawbacks, including a relatively small third row and cargo compartment and an infotainment system that isn’t quite state-of-the-art. Some of that is offset by the fact it does offer a good mix of advanced safety gear and was the very first vehicle awarded a Top Safety Pick+ rating by the Insurance Institute for Highway Safety. 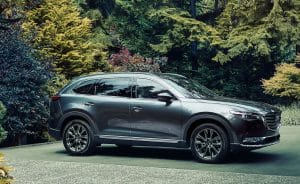 The new CX-9 offers room for seven passengers, although the back row is a bit tight.

Exterior: Though the current-generation CX-9 has now been around since 2016, it remains startlingly fresh, the distinctive sweep of Mazda’s Kodo design language making it, to our eyes, the most attractive crossover in its class.

Like seemingly every manufacturer these days, Mazda here has adopted a larger grille and brand badge, but it falls short of the garish exaggeration we see with some competing brands. And the curves of the fascia, hood and fenders are a nice contrast to the almost cartoon-like angles that some other manufacturers have been opting for. The subtle flaring of the rear quarter panel adds an element of athletic muscularity.

Interior: As with the exterior, the cabin of the CX-9 is distinctive and sinuous, and there’s a great use of upscale materials that gives the crossover a more luxurious appearance than you might expect for the money. And the cabin is nearly as quiet, at highway speeds, as many true luxury models.

… The relatively low instrument panel ensures great forward visibility, meanwhile, and the same can be said for the rest of the vehicle, despite the coupe-like curve to the roofline …

The higher-line models added new, larger 9-inch infotainment screens for the 2020 model year and with Mazda shifting away from touchscreens, there’s also a new control knob on the rear of the center 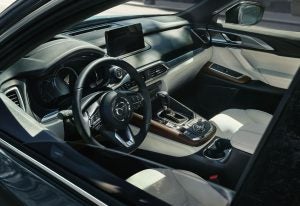 The interior of the CX-9 is very functional with nice finishes.

console, a feature we generally prefer, with or without a touchscreen.

Top-line models add nice details such as second-row captain’s chairs, as well as heated seats and a power liftgate, and the top-line CX-9 Signature edition adds a center console between those chairs while adding new colors and Nappa leather.

On the downside, the back row is rather tight and, with all seats upright, there is surprisingly little cargo space. With second and third rows down, however, it becomes a large, flat-floored cargo compartment.

Powertrain: For a brand that long used the ad catchphrase, “Zoom-Zoom,” Mazda has rarely offered the most powerful engine options in the segments it competes in. That’s true with the 2020 CX-9’s 2.5-liter turbo four, as well, though the powertrain package is no slouch. 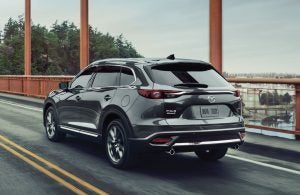 The CX-9 is powered by a 2.5-liter turbocharged four cylinder, putting out 227 horsepower.

What may surprise some folks is the fact that you’ll need to go with premium fuel to maximize output of 250 horsepower and 320 pound-feet of torque.

If you do, you’ll find a lot more low and mid-range grunt than you might expect of a turbo four. Should you be watching your budget, however, you can go with regular unleaded and still get a reasonable 227 hp and 310 lb-ft.

The engine is mated to a six-speed automatic, a transmission that, based on the numbers, might seem outdated, but it is smooth and, under anything but flat-out acceleration, shifts are generally imperceptible. The CX-9 is offered with either front-wheel drive or all-wheel drive that biases forward under normal situations.

Fuel economy on our Soul Red 2020 Mazda CX-9 Signature is EPA-rated at 20 City, 26 Highway and 23 Combined, relatively middle of the pack, though the reliance on 93-octane fuel to get maximum performance does add to the operating costs.

Technology and Safety: Mazda may have a slighter higher base price than some competito 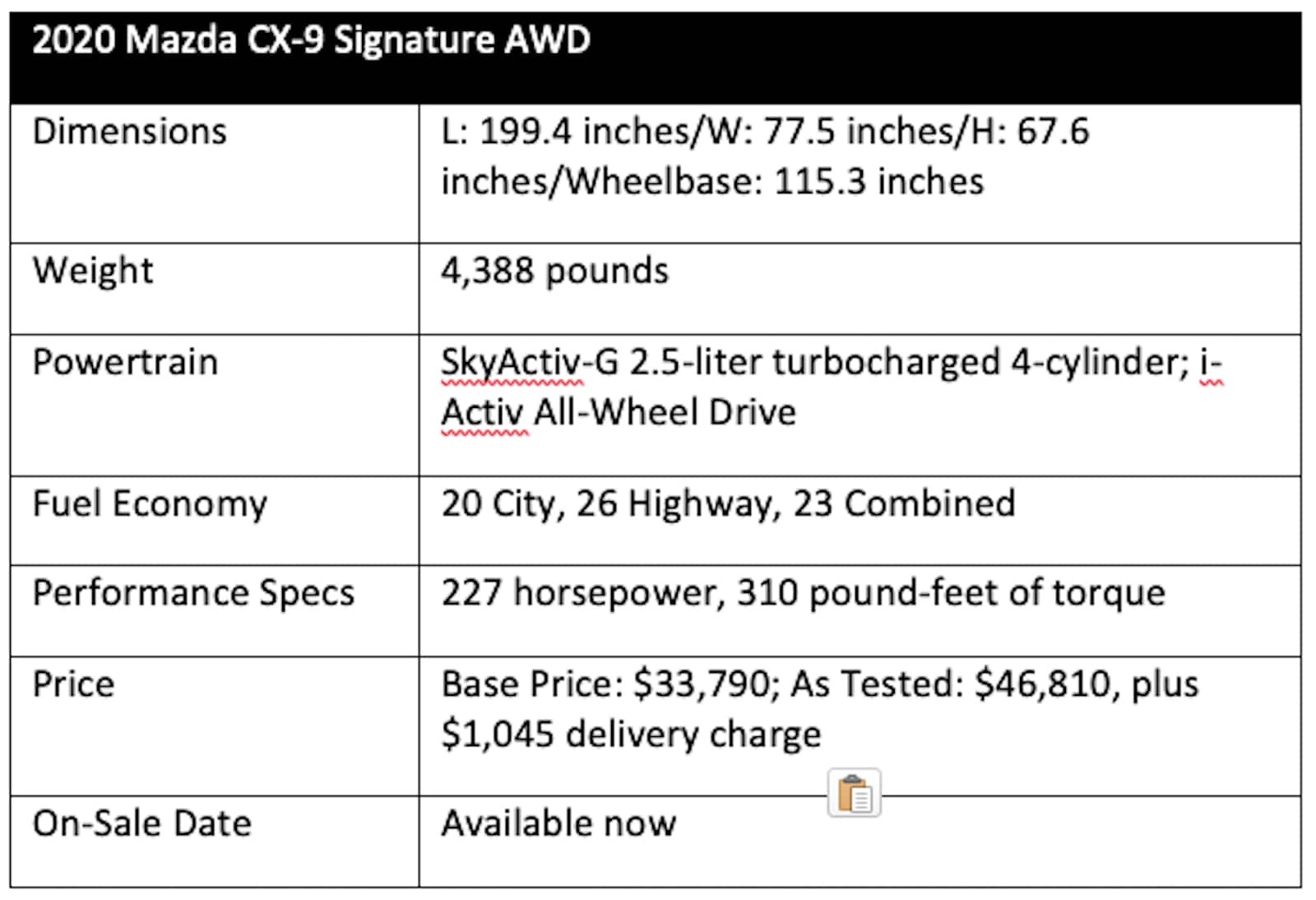 rs in the three-row class, but you get a lot for your money. That’s particularly true when it comes to smart safety technology grouped together as part of the i-Activsense driver-assistance package.

The CX-9 also offers standard gear such as auto headlamps, heated exterior mirrors and rain-sensing wipers. Move up in the trim package hierarchy and you’ll get things like the 9-inch video screen, Apple CarPlay and Android Auto, power second-row seats and more.

Drive Impressions: As is the norm, it seems, with Mazda, the CX-9 is a fun car to drive, no mean feat when you’re talking a minivan alternative three-row CUV. 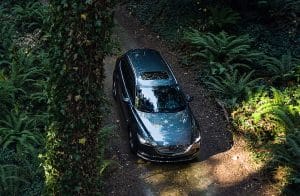 Mazda’s largest crossover has a suspension that “soaks up bumps, but holds together nicely.”

Acceleration is peppy, hitting 60 in just a bit over 7 seconds, and there’s little of the turbo lag you might expect from an otherwise modest-sized engine.

The car is quiet and comfortable and well-mannered while otherwise bouncing along on Michigan’s notoriously potholed highways.

That suspension may soak up bumps but it holds together nicely when engaging in more enthusiastic driving situations, with little body roll and just the right amount of understeer. Steering itself is precise and predictable. All in all, there’s a feeling of confidence to driving the CX-9 aggressively that you won’t find in many competitors.

(Mazda has done better than expected during the pandemic-fueled auto sales slowdown.)

Wrap Up: The 2020 Mazda CX-9 has a lot going for it: looks, reasonable performance, nimble handling and lots of features, for a start. There are some downsides, including a lack of rear seat roominess and cargo space. And the need for premium fuel for full power will add to your operating costs – or lead you to sacrifice a bit of performance to save cash.

If roominess is your top priority, the Volkswagen Atlas, Hyundai Palisade and Kia Telluride might be alternatives to consider. But on a number of other fronts, including the simple joy of sporty driving, the Mazda CX-9 is clearly worth putting down on your “under consideration” list. 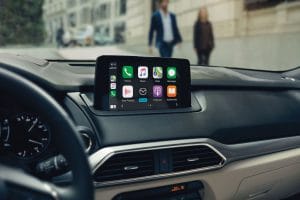 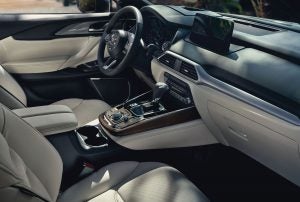 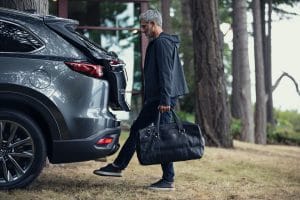