But will buyers plug in? Initial availability will be limited. 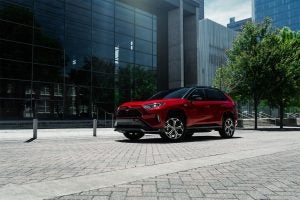 The 2021 Toyota RAV4 Prime will get up to 42 miles in all-electric mode, up from the 39 Toyota originally estimated.

Say the word, hybrid, and there’s a good chance an image of the Toyota Prius will pop into your head. These days, there are plenty of gas-electric modelson the market, however, and Toyota itself is on the way to offering hybrid versions of virtually every product in its line-up. Now, for 2021, the Japanese automaker adds yet another one, and the RAV4 Prime could challenge your perception of what Toyota hybrids are all about.

For one thing, it’s a plug-in, or PHEV, only the second in the brand’s line-up. Like the Prius Prime launched four years ago, it offers extended all-electric driving range. But the big surprise is that the 2021 Toyota RAV4 Prime also becomes the fastest and most powerful version of the familiar SUV.

The 2021 plug-in offers “this incredible balance of that rational purchase of a hybrid with this incredible performance,” said Joe Moses, the general manager of Toyota marketing. 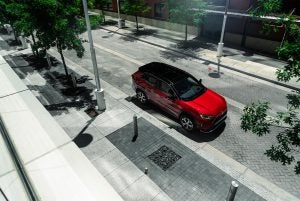 The plug-in hybrid version of the RAV4 relies on three motors powered by an 18.1 kWh lithium-ion battery.

We got a first look at a thinly disguised “concept” version of the Toyota RAV4 Prime at the Los Angeles Auto Show last November, and the production model was set to make its debut last month at the North American International Auto Show in Detroit. The event, like so many others this year, was canceled due to the coronavirus pandemic. Instead, Toyota offered up a first look during an extensive media webinar this past week. And it offered up a few surprises.

For one thing, we learned that the production version of the RAV4 Prime will travel longer in pure electric mode than original expected: 42 miles per charge, compared to the 39-mile estimate released last November. It’s also a bit quicker, launching from 0-60 in a peppy 5.7 seconds, a tenth faster than the earlier target. In pure electric mode, the plug-in hybrid will get to 60 in 9.2 seconds. 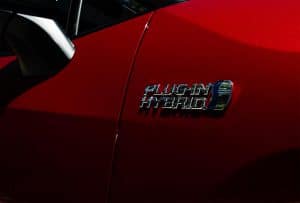 The plug-in can recharge in anywhere from 2.5 to 12 hours, depending upon your source of power. But it can’t connect to a public quick-charger.

As for the drivetrain itself, Toyota explains in a release, “The RAV4 Prime uses a differently tuned version of the RAV4 Hybrid’s 2.5-liter four-cylinder Atkinson-cycle gas engine. It produces the same projected 176 hp as in the hybrid, but paired with the electric motors, total system output equals 302 horsepower.”

Notably, where the plug-in version of the Prius can operate in all-electric mode only up to 62 mph, the RAV4 Prime can keep going up to 84 mph.

Power for the electric side of the driveline comes from an 18.1 kilowatt-hour lithium-ion battery. Like the standard RAV4 Hybrid, it can recapture energy lost during braking an coasting, one reason it gets an estimate 94 MPGe. But the extended range comes from plugging it in. 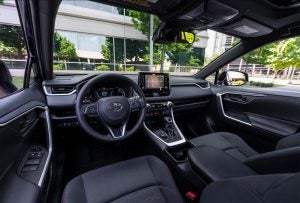 The hefty price premium for the plug-in RAV4 is partially offset by the interior upgrades.

As with some other plug-in models on the road today, there also are steering wheel-mounted “paddle shifters” that actually serve to increase brake regeneration – which, while driving, will feel a bit like you’ve downshifted.

Charging time varies significantly depending upon what energy source you use, running to as little as 2.5 hours if you’ve got a high-amp 240-volt circuit available, or as much as 12 hours if you plug into a standard household 120-volt line.

There are a number of other changes made going from RAV4 Hybrid to RAV4 Prime. Visually, there’s not much to catch your attention. Inside, one of the first things you might catch is cued in by your ears, Toyota engineers putting more effort into sound deadening to mask the annoying road and wind noises you’d otherwise hear when operating in all-electric mode. 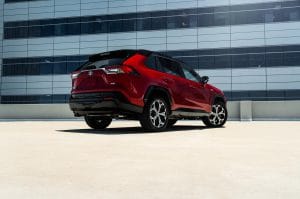 Toyota only expects to bring 5,000 of the RAV4 Prime plug-ins to the U.S. this year.

(Review: A week with the Toyota Tundra TRD Pro.)

Another feature unique to the Prime version of the RAV4 is called Predictive Efficient Drive which, Toyota explains, “acts like an invisible “hyper-miler” co-driver. Using the available navigation system, Predictive Efficient Drive essentially reads the road and learns driver patterns to optimize hybrid battery charging and discharging operations based on driving conditions. The system accumulates data as the vehicle is driven and ‘remembers’ road features such as hills and stoplights and adjusts the hybrid powertrain operation to maximize efficiency.”

There will be two trim levels offered for the 2021 Toyota RAV4 Prime, the XE starting at $38,100, and the XSE at $41,425. Both are fairly well equipped compared to standard gas and hybrid versions of the SUV – which is itself the best-selling vehicle in Toyota’s U.S. line-up.

Despite the impressive range, mileage and performance numbers, Toyota is taking a cautious approach to the plug-in, with only about 5,000 of the SUVs set to be brought into the country this year. Perhaps that shouldn’t be all that surprising. The Prime carries a fairly hefty price premium over the Hybrid, for one thing, which starts at just $28,350. The good news is that federal tax credits could reduce the gap by as much as $7,500 for a plug-in buyer.

Meanwhile, there has been a less than enthusiastic reaction by U.S. buyers to plug-in hybrids in general. So, Toyota officials say they’ll be testing the water and, if the market does plug in to the new offering, they could up availability next year.