New wagon is an option for Europe only. 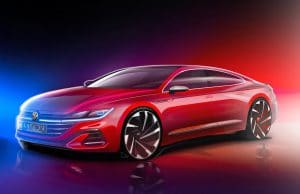 Volkswagen plans to unveil its 2021 Arteon sedan and shooting brake. It broke the news with a rendering of the new models.

Volkswagen is giving the world the first glimpse of the new Arteon, which is scheduled to make its virtual worldwide debut June 24, with an early rendering of the new models.

Alongside the classic gran turismo version of the new Arteon, Volkswagen also planning to debut a “shooting brake” version, which will be available in Europe. The wagon will also be part of the debut, the company said.

The two versions include what is described as a Dynamic four-door fastback to be updated and launched alongside a second body type – the Arteon Shooting Brake ­– in Europe. 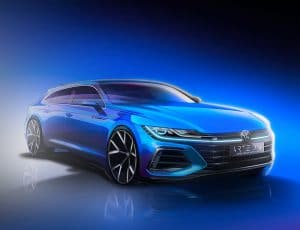 VW is adding an option for a shooting brake, or wagon, but only in Europe.

On the inside, both versions of the new model will be given a makeover, focusing on a new cockpit designed to give the vehicles a premium feeling. The company will integrate the latest modular infotainment matrix systems to “ensure the best possible connectivity,” Volkswagen officials said.

The new models get intelligent assist systems including “Travel Assist,” which offers highly assisted driving, although with limits for the first time.

The systems are designed particularly with long-distance journeys in mind, allowing the vehicle to take over steering, acceleration and braking up to speeds of 130 mph that are normally handled by the driver.

The world première and detailed information about the Arteon sedan and shooting brake will follow later this month, Volkswagen said. 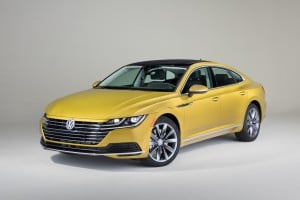 While it bears a passing resemblance to the Passat, that 2021 Volkswagen Arteon is a longer, more sizeable car with a much more up-to-date design below its glossy, five-door coupe-like body. If you walk all around, you’ll identify that it’s basically a hatchback and not a sedan.

The company promises that performance will remain part of the vehicle’s make up with an “ultra-powerful” turbocharged engine powering the new Arteon, which is supposed to be the best of Volkswagen car selection, officials said.

If the renderings are accurate, the 2021 Volkswagen Arteon features a compelling exterior with the new grille cutting into the fender, delivering way up best to a clamshell-pattern hood that drapes into the top bumpers.

(Joseph Szczesny contributed to this report.)