Flagship gets exterior and interior makeover. 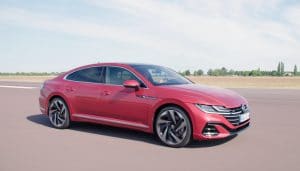 Volkswagen unveiled its redesigned flagship model, the Arteon, revealing an updated exterior and what officials believe to be a significantly upgraded interior for the 2021 model year.

It’s not all sunshine and rainbows. The automaker is expanding the line-up to add a shooting brake, or wagon, version of the new Arteon — for Europe only. So for journalists and other rare fans of wagons, no dice.

But the new exterior gives the brand’s halo car a more aggressive look with some premium touches, which fits with what the company believes Arteon buyers want.

In fact, the new model more than ever is aimed at the qualities VW officials believe Arteon buyers ascribe to the vehicle: fun-to-drive, good performance, nice exterior styling and a feeling of refinement. In short, they want a premium car for a less-than-premium price tag. Volkswagen’s happy to deliver that to them.

“People are buying Volkswagens for the driving experience,” officials said.

Part of that experience is walking up to car and liking what you see. For the 2021 model year, the update is more evolution than revolution. The front end gets a more angular, sharpened look compared with its predecessor. The grille “is not just avant-garde, it’s also aerodynamic,” officials noted. That shows up in its drag coefficient of just 0.265.

The Arteon also gets a new illuminated grille and LED daytime running lights that connect form a central light bar, surrounding the new Volkswagen logo and using light as the new chrome. Consequently, the Arteon has been given a new and unmistakable daytime and night-time lighting signature.

In addition to the light bar, the front apron features three chrome bars instead of the four that used to be there. The outer and bottom segments of the front apron are always the same color as the vehicle’s paintwork (except the lateral air intake grilles). Another change comes with the SE trim level which gets two additional air intake openings, adding to the sedan’s more aggressive look.

The biggest change comes on the inside, where VW designers wanted to give the Arteon a much more premium feel than past models. The idea was to compete with the Audi A5, and they believe they achieved it.

Volkswagen’s interior designers redesigned the entire dash panel – the surfaces, air outlets, and trims –the center console, including infotainment section and air-conditioning control, and the top sections of the door trims. The fabrics and leather in the vehicle interior have also been upgraded.