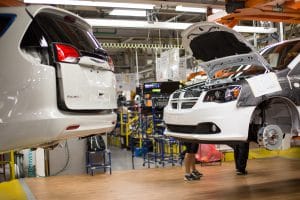 FCA announced it is cutting the third shift at its Windsor, Ontario plant. Unifor, the Canadian union representing workers at the plant, says it plans to fight it.

Fiat Chrysler Automobiles N.V. will offer retirement packages as it moves to trim 1,500 jobs the company’s assembly plant in Windsor, Ontario, setting the stage for a contentious round of negotiations with Unifor, the union representing FCA’s Canadian workers.

“As previously announced in March 2019, FCA intends to return the Windsor Assembly Plant to a traditional two-shift operation, now scheduled to begin on July 13, 2020, in order to better align production with global demand. This action will affect approximately 1500 people,” FCA spokeswoman Jodi Tinson said in an email.

Tinson said retirement packages are being offered to eligible employees. The company will make “every effort” to recall laid off hourly employees for placement, based on seniority, in open full-time positions as they become available, she added. The company is cutting the Dodge Grand Caravan from the plant. 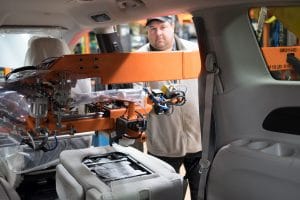 By eliminating the third shift at the Windsor, Ontario plant, FCA is cutting 1,500 jobs.

David Cassidy, president of Unifor Local 444 in Windsor, said the union plans to continue fight the cuts. Unifor and FCA are scheduled to begin negotiations on a new labor contract this summer.

Cassidy said in a post on the local’s website said FCA will begin operations two shifts with three separate crews on June 22. The elimination of the full third production shift “is still slated to go” July 13, Cassidy said.

“I tried taking this company to the mattresses to offer more money in the buyout. We even tried pushing for packages for new hires. We have fought these issues all the way to the top of the company. To all of it, they said they are simply ‘sticking to the contract,’” he said.

“I am sick about all of this! The company has not made any of this easy and the unwillingness has left a terrible taste in my mouth that I am sure to take with me into bargaining,” he added. 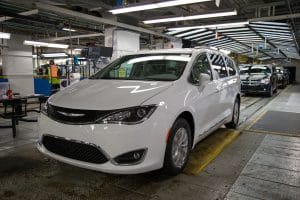 Fiat Chrysler is phasing out the Dodge Grand Caravan minivan in favor of just the Chrysler Pacifica.

Cassidy said the Local 444, “has fought through that issue for more than a year, offering many different avenues, with the hopes of stalling this decision until contract negotiations where we could hash this out over a strike deadline, as of 4 p.m. today the company holds that the shift will be done on July 13.”

Cassidy added on Monday representatives from FCA will be out canvassing senior employees for buyouts. The details of the packages being offered haven’t been revealed.