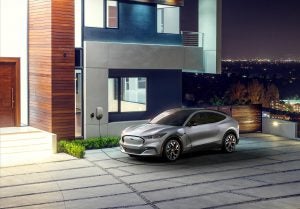 Ford is facing what may be pivotal year for the automaker and getting the launch of the Mustang Mach-E is critical to its long-term success.

It’s been a devastating year for the auto industry. The coronavirus pandemic is expected to result in a global sales decline of at least 20%, even as automakers wrack up record debt and fall into what one recent study described as a “profit desert.”

Few companies have been harder hit than Ford Motor Co., which suffered a crushing, $2 billion loss during the first quarter and is expected to go deep into the red for the April-June cycle. No wonder, then, that many analysts are starting to look at the second half of the year as a make-it-or-break-it period for Detroit’s second-largest automaker.

The why is simple. Not only must Ford shore up existing product lines but also “They have a lot of important launches coming this year” that will have to be executed as flawlessly as possible, said Joe Phillippi, the founder of AutoTrends Consulting. 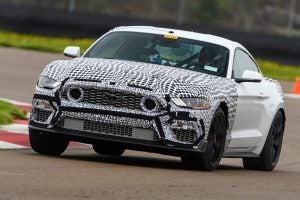 The Ford Mustang Mach 1 badge has been on hiatus since the 2004 model year, but is coming back later this year.

Every year brings the rollout of an assortment of new models for a company the size of Ford. Some are relatively modest, such as the plug-in hybrid version of the Escape that Ford announced Monday, or the Mach 1, the latest niche variant of the familiar Mustang coupe coming late this year. But 2020 also sees Ford introducing a mix of all-new models that are as significant as anything it has rolled out in years. As Mark Phelan, the auto critic at the Detroit Free Press, recently pointed out, these include:

Launching any single one of these products would be a significant milestone for Ford, said Stephanie Brinley, principal analyst with IHS Markit, adding, “These new products coming collectively makes it a bigger risk than they would be individually.”

The risks vary by product line, of course. Considering Ford makes an average of as much as $10,000 or more on every one of its full-size pickups, according to industry data, even a modest delay in getting F-150 to showrooms could have a devastating impact on its bottom line. 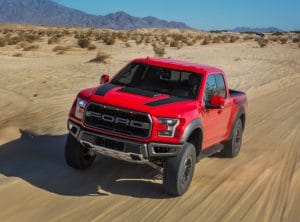 Ford plans to unveil the 14th generation of its F-150 pickup on June 25 via the internet.

Production, however, could be impacted by numerous factors. Ford’s North American production network is only now ramping back up after a two-month shutdown forced by the coronavirus pandemic. And there have been ongoing plant disruptions when workers have been found to be ill, forcing a clean up. There is yet the potential for a second wave of the virus that could complicate matters and, even if things go more smoothly, the steps needed to reduce in-plant infection risks has challenged assembly line productivity.

Ford officials also are sweating the inevitable risks that go along with a major new product involving many model variants and multiple plants. They only have to look back at the disastrous rollout of the Ford Explorer and Lincoln Aviator SUVs last year which suffered significant delays at the automaker’s Chicago Assembly Plant.

Analyst Phillippi says he’s concerned that Ford could face problems that it might otherwise have been able to solve because of “all the turmoil they’ve had internally” during the last year or two, including the unexpected departure of Joe Hinrichs. A 19-year Ford veteran and its head of automotive operations, he “retired” in February as part of a broad management shake-up.

Other senior managers with manufacturing in their blood have also left over the last several years, said Phillippi, adding that, “You have to wonder how much institutional knowledge they’ve lost. That can really hinder you” when it comes to a complex product launch. 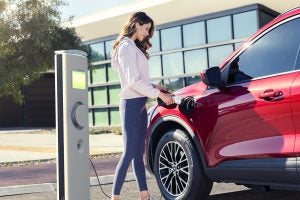 Ford took the virtual covers off its new Escape plug-in hybrid, which get a class-leading 100 MPGe.

Production challenges inevitably face all new products, but the Mustang Mach-E raises new ones as Ford’s first long-range BEV. To start with, it opts for an entirely new “architecture,” a skateboard-like platform that puts both motors and batteries – as well as many key electronic components – under the floorboards. It’s an approach now familiar to Tesla but takes Ford in a new direction.

If anything, Phillippi believes that of this year’s big Ford launches, “the Mach-E is probably going to be the most critical. They know how to screw a pickup together,” he said, but whether they can get this newfangled design to come off the line as planned is another matter entirely.

Ford is in the midst of an $11.5 billion electrification program that includes products like the new Escape PHEV and plug-in versions of the Lincoln Aviator and Corsair SUVs. As the first long-range BEV, however, the Mach-E is a high-profile effort that will serve as a telling indicator of whether the venerable Detroit automaker can deliver a real challenge to its upstart California rival – as well as to classic competitors like Volkswagen and General Motors with their own high-budget EV efforts.

Initial reviews of early Mach-E prototypes have been solid, however, and analyst Brinley is cautiously confident that, barring a manufacturing disaster, Ford will be able to address any minor product concerns that crop up. 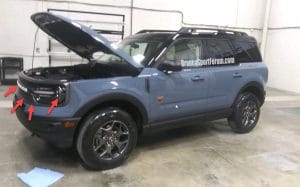 Leaked photos of the Ford Bronco Sport reveal a real competitor for the Jeep Renegade.

As for the Bronco, internal Ford sources have told TheDetroitBureau.com production has been pushed back several months – as it has with the Mach-E – but the automaker officially says that sales will begin on schedule, later this year.

The hope inside the company is that it can avoid the production problems that fouled the debut of the Explorer. The question, as far as Brinley is concerned, is whether there will be a market for this decidedly retro SUV which defies the soft and squishing styling vocabulary defining most of today’s SUVs and CUVs. Initial indications, however, suggest Ford could have a hit on its hand here, as well.

Getting these four products right could go a long way towards easing the pains Ford has been feeling, in terms of sales and market share, and on its balance sheet.

As risky a year as it is for the Detroit automaker, though, company officials at least can take comfort in knowing they aren’t alone.

“It is not just Ford that is going to have a difficult 2020,” said Brinley. With the coronavirus pandemic and a weakened global economy, “that’s true of any manufacturer releasing new products over the next 18 months.” 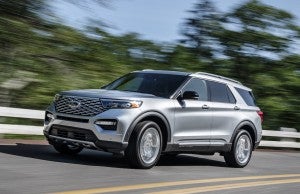 The 2020 Ford Explorer was supposed to drive earnings but a muddled launch of the new model hurt the bottom line.

A study released by consultancy AlixPartners last week estimated global light vehicle sales will slip about 20% for all of 2020, to 70.5 million. The industry has meanwhile had to take on an estimated $72 billion in new debt this year, largely due to the effects of the pandemic. That only complicates matters at a time when competition is fierce and the industry is investing massive sums in new electric and autonomous vehicle technologies.

All told, that is likely to result in a long-term “profit desert”, warned AlixPartners’ auto chief Mark Wakefield, a situation where product launch failures could be more problematic than ever.