The Nissan "mainstay" gets a top-to-bottom makeover. 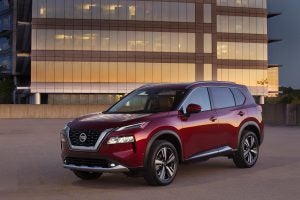 The 2021 Nissan Rogue gets an all-new platform and an upgraded design.

We’ve come to recognize the importance of a new product by the number of times an automaker teases it before the official launch. And by that measure – and by checking out its annual sales – there’s no way to downplay the significance of the new, 2021 Nissan Rogue.

The second-largest of the Japanese automakers finally lifted the veil Monday morning and offered the first complete look and details on what will serve as its entry into the hotly competitive compact crossover market.

The Rogue “has been a mainstay in our portfolio,” said Jared Haslam, the vice president of product planning for Nissan’s North American operations. The 2021 makeover, he added, will target “a very demanding customer who will expect a lot from a product.”

In this case, that means a new, more athletic design, a roomier and more upscale interior and, considering digitally savvy Millennials will be the 2021 Nissan Rogue’s primary customer, there’ll be a lot of new technology onboard, especially in terms of advanced safety gear, such as the latest version of the Nissan ProPilot Assist.

(The Z is back. Nissan drops first tease of next-generation sports car.) 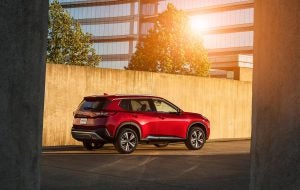 The Rogue will feature a new version of ProPilot Assist able to use its onboard navi to automatically adjust speeds when exiting freeways or taking an interchange.

An optional version of that system now can access the vehicle’s onboard navigation, “to predict the road ahead…and how we can respond to it,” said Andy Christensen, a senior engineer at the Nissan Technical Center.

As was signaled by the teaser image Nissan released last week, the 2021 Rogue will lift from the concept X-Motion we saw a few years ago, here introducing a new and larger take on the brand’s double-V-Motion grille which is now framed by split lighting. Slit-like running lights sit directly beneath the hood, the Rogue’s headlamps midway down the grille.

While there’s a subtle slope to the 2021 model’s roofline, the latest version of the Rogue sits more upright, with the nose all but vertical. There’s subtle sculpting to both the silhouette and the wider looking rear end. The goal, according to Haslam, was to give it “a more robust feel, (and) athletic stance.” 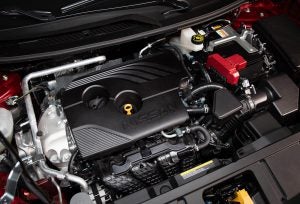 For now, at least, the 2021 Rogue will be offered with a single, 2.5-liter I-4 engine and the choice of front- or all-wheel-drive.

The 2021 Rogue sits on an all-new platform but measures only ever so slightly taller and wider than the outgoing model, its length the same. But the new platform has a number of advantages: it’s lighter, stiffer and meant to enhance elements like noise and vibration. It also allows the rear doors to swing open to nearly 90 degrees for easier access. Those rear doors now can be equipped with pull-up sunshades, as well.

The “family hub” design of the cabin includes upgraded seating, with Nissan’s distinctive “Zero-gravity seats” now used front and back. As you’d expect of a family vehicle, there are plenty of storage nooks and a fair number of USB ports, front and back –including new USB-C connectors.

Other useful options include a tri-zone climate control system and a motion-activated power tailgate. The cargo area includes a Divide-n-Hide system to protect valuables.

The tech list includes a 12.3-inch digital gauge cluster and the choice of a 7.0 or 9.0-inch touchscreen display, as well as the optional 10.8-inch head-up display system. The infotainment system includes Android Auto, as well as Apple CarPlay, with an upgrade allowing the use of the new wireless CarPlay system that can be run with an iPhone using the inductive Qi charging system. 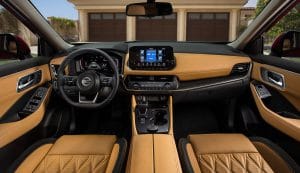 That ProPilot technology relies on an upgrade camera and radar sensing system to assist the driver in steering and braking. And with the ProPilot Assist with Navigation system, the car’s active cruise control grows smart enough to handle highway exits and interchanges without having to touch the brakes or disengaging the system.

In recent months, there were rumors that Nissan might come up with multiple powertrain options for the new Rogue. For now, at least, there will just be one powertrain available, a 2.5-liter DOHC inline-four making 181 horsepower and 181 pound-feet of torque, up 11 and 6, respectively.

“At this time,” there are no plans for any other option, said Haslam, though Nissan officials appeared to leave a little wiggle-room for the future that could include a hybrid or a more powerful gas package. Considering what we’re seeing from competitors, such as Toyota, perhaps a more powerful hybrid could come later, some analysts continue to believe. 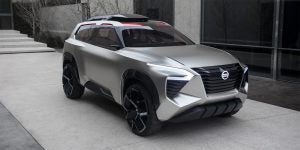 The Nissan X-Motion Concept strongly influenced the design of the 2021 Rogue.

The upgraded I-4 will push power through a CVT to either the front or all four wheels. A driver mode selector adds two additional options for all-wheel-drive models, including snow and off-road.

Depending upon the package, the 2021 Nissan Rogue will deliver up to 27 mpg City, 35 Highway and 30 Combined.

Set to go on sale in the U.S. next autumn, Nissan won’t release pricing until closer to that release date but Haslam hinted “We expect to be extremely competitive.”

That will be critical, as the 2021 Nissan Rogue will be entering an extremely competitive marketplace, going up against some of the hottest vehicles on the market right now. And the automaker clearly needs to revitalize demand considering sales of the Rogue dipped from 412,000 in 2018 to 350,000 last year. Nissan has been struggling to reverse a broader decline in sales and earnings, so the launch of the all-new Rogue will be a critical step in turning things around.