“Get them out of here,” says Bubba Wallace. 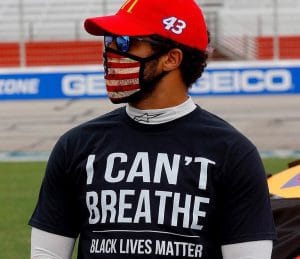 With the backing of drivers like Bubba Wallace, and in the face of a nationwide shift on racial disparity, NASCAR late Wednesday announced it will ban the flying of Confederate flags at its races.

The move is one of many steps being announced across the country in response to nationwide protests initially triggered by the death of George Floyd, the latest in a line of blacks killed by police.

“The presence of the Confederate flag at NASCAR events runs contrary to our commitment to providing a welcoming and inclusive environment for all fans, our competitors and our industry,” NASCAR said in a statement posted to its website just hours before the start of an evening race in Martinsville, Virginia.

“Bringing people together around a love for racing and the community that it creates is what makes our fans and sport special,” the statement added. 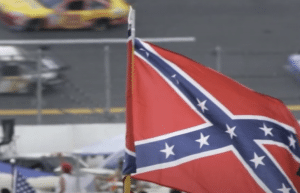 This is a scene that won’t be seen at NASCAR events going forward.

As a sport that had its roots in the South – many of its earliest competitors learning how to drive fast as moonshiners hoping to avoid the “revenuers,” NASCAR has long been a place where classic Southern traditions and symbols have held strong. But there has been growing opposition during the last decade as criticism has grown for a variety of symbols seen to represent slavery and Jim Crow laws, such as statues devoted to Confederate figures.

While the Stars-and-Bars, more formally known as the Confederate Battle Flag, has disappeared from vehicles entered in NASCAR series, it was a common sight at tracks, flown or worn by many fans.

The protests sweeping the country in response to the brutal killing of George Floyd at the hands of Minneapolis police has triggered a wave of introspection across America. A number of corporations have announced plans to address systemic racial issues, and so have sports teams and leagues. Earlier this week, the NFL reversed its long-standing opposition to players who “take the knee” during the playing of the Star Spangled Banner.

NASCAR, it seems, couldn’t escape the shift in the national mood, especially when it received criticism from within. The most direct came from Bubba Wallace who became the series’ first full-time African-American driver since 1971.

“Get them out of here,” Wallace said this week. “No one should feel uncomfortable when they come to a NASCAR race. It starts with Confederate flags.”

For his own part, Wallace told CNN earlier this week that he personally wasn’t “bothered” by the sight of a Confederate flag. But I don’t speak for everybody else.”

He also acknowledged that the move announced by NASCAR on Wednesday is likely to mean “There’s going to be a lot of angry people that carry those flags proudly. But it’s time for a change.”

NASCAR, which dates back to 1948, has long been considered the most popular automotive race series in the U.S. and runs three individual programs: the Cup, the Xfinity and the truck series.

In recent days, both U.S. Marines and the U.S. Navy have banned servicemen from displaying or even having Confederate flags in all public spaces and work areas