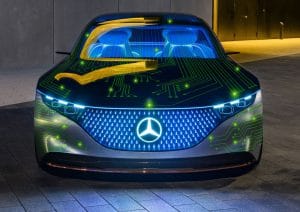 Mercedes-Benz and Nvidia are partnering to create a new, more powerful software architecture for the luxury automaker for 2024.

The melding of cars and computers took another step forward with Mercedes-Benz and Nvidia announcing a new partnership that will make the luxury vehicles nearly as much computer as car starting in 2024.

That’s when all Mercedes vehicles will be built using the computing giant’s new software architecture, Drive. The new architecture will put the German luxury brand in a position to offer the latest in advanced driver assistance systems as well as the development of autonomous driving.

Nvidia Chairman Jensen Huang called it a “once in a lifetime partnership” that he believes will change the face of the automotive industry.

What the partnership calls for is, essentially, Nvidia to provide an architecture with computing power that is much more powerful than what will be needed in 2024 so that Mercedes vehicles can be updated over-the-air with new technology for decades. 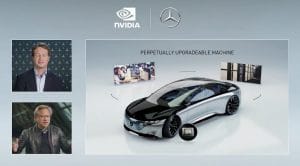 “Together, we’re going to revolutionize the car ownership experience, making the vehicle software programmable and continuously upgradeable via over the air updates,” Huang said. “Every future Mercedes-Benz with the Nvidia Drive system will come with a team of expert AI and software engineers continuously developing, refining and enhancing the car over its lifetime.”

A primary feature will be the ability to automate driving of regular routes from address to address. In addition, there will be numerous future safety and convenience applications. Customers will be able to purchase and add capabilities, software applications and subscription services through over-the-air software updates during the life of the car.

If that doesn’t sound entirely like the cutting edge of development, i.e. Tesla has been using over-the-air updates for years and other automakers are also currently doing it, Huang was quick to address the comparison.

“Surely they deserve a great deal of credit for pioneering and pushing autonomous driving, software upgradable features and, most importantly, inventing and discovering this new business model that is proven to be quite successful,” he said, adding that selling software and other features that way was a model that, until now, had not been viable. “We’re going to take this one giant step forward — unlike anything that’s been done before.” 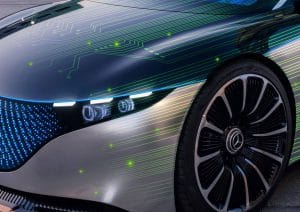 The new architecture will be made available on every Mercedes in the line-up starting in 2024.

For Mercedes, it puts the company at the leading edge of development. The technological capability will be focused on safety initially with the ADAS component, according to Mercedes CEO Ola Källenius. However, in an increasingly competitive luxury market where return-on-investment is critical, the ability to develop an additional revenue stream is an opportunity too good to ignore.

“We took the first few baby steps of this over-the-air downloadability a couple of years ago,” he said, “and we can see in our app store that the interest is growing. This revenue stream is also growing.

“The electric architecture that comes later this year with the new S Class makes that domain so much wider. So we see the opportunity here now to grow and with this partnership it’s like we’re taking the ultimate step, dovetailing with the overall software-driving architecture to open up the whole vehicle.”

Because the 2024 models will come “juiced” with more computing power than is necessary, a 10-year-old Mercedes could still be considered a cutting-edge vehicle, from a technological standpoint. This has far-reaching implications, including the value of a used Mercedes, which will ultimately impact the sticker price on the new models.