New system expected to debut on upcoming AMG One hypercar. 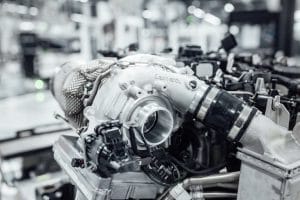 Mercedes-AMG is partnering with Garrett Motion on a new electrified turbo charger that eliminates turbo lag.

What would the automotive world be without the turbocharger? The technology has helped automakers downsize engines, even while boosting power and improving fuel economy. But the devices do have their drawbacks, starting with dreaded turbo lag, the frustrating pause between the time one’s foot mashes the throttle and the power kicks in.

A newly developed system, jointly developed by AMG and Garrett Motion, could solve the problem, however. Dubbed the eTurbo, it makes use of the electrified technology first developed for Formula One. And it is expected to show up in production on the AMG One hypercar due to market in 2021.

Daimler AG is investing billions into electrification, the Mercedes-Benz brand set to roll out an assortment of all-electric models during the next several years, on top of the hybrids and plug-ins it already offers. Mercedes-AMG, meanwhile, has big plans for battery power, as well, starting with the mild hybrid EQ Boost technology that it is using on models like the GT 43 four-door coupe it unveiled earlier this week. The eTurbo would take things the next step. 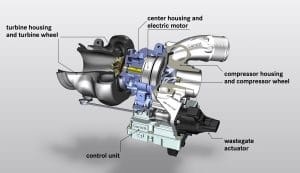 The shows the components of the new eTurbo developed by Mercedes-AMG and Garrett Motion.

“We have clearly defined our goals for an electrified future,” said AMG Chairman Tobias Moers. “In order to reach them, we are relying on discrete and highly innovative components as well as assemblies. In a first step this includes the electrified turbocharger — an example of the transfer of Formula 1 technology to the road, something with which we will take turbocharged combustion engines to a previously unattainable level of agility.”

At first glance, the AMG/Garrett eTurbo might look like any conventional turbocharger. A teardown reveals a tiny electric motor – measuring barely 1.6 inches – connected to the turbocharger shaft, between the turbine wheel that normally draws power from exhaust gases. The problem is that it takes a moment for those hot gases to build up, causing dreaded turbo lag.

But apply current and electric motors reach maximum torque all but instantaneously, and that’s what happens here. It covers that brief gap, giving instant seat-of-the-pants acceleration. And while conventional turbos again lag when the driver’s foot lifts off the throttle – say, when going into a turn – the eTurbo is instantly ready to provide full boost whenever needed. 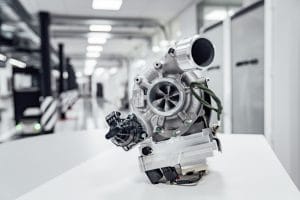 The new eTurbo will make its debut in the AMG One, which will use drivetrain technology lifted from Formula One racers.

Officially, AMG isn’t saying when or where it will launch the new technology, hinting it will be used in its “next vehicle generation.” But it is expected to show up first on the AMG One which, the performance brand has indicated, will lift drivetrain technology all but directly from its Formula One program.

Beyond that, expect to see the eTurbo show up in a variety of other AMG offerings which, insiders hint, could collectively become known as the 73 Series, taking a step beyond what are now the most powerful offerings in the Mercedes-AMG line-up, models like the GT 63.

(Mercedes pulls the wraps off 2021 E-Class coupe and cabriolet, including AMG editions.)

AMG isn’t the only automaker looking at electrifying its turbo technology. Infiniti showed off something quite similar on its Q60 Project Black S Concept, and Audi has also been exploring the idea. It is likely to become more common as it proves itself out in the high-demand applications AMG is targeting.