Production limited by pandemic, availability will be limited initially. 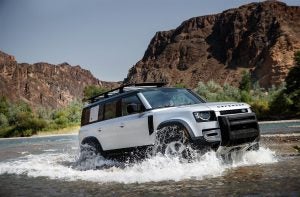 The new Land Rover Defender will be able to ford nearly three feet of water.

It’s been a full 23 years since the last Land Rover Defender rolled into U.S. showrooms, so you might understand why plenty of folks have been getting anxious since hearing confirmation last year that the all-new version finally would make the jump across the Atlantic.

The good news is that the first of the new SUVs has finally landed and will be ready for potential buyers at a starting price of $49,901 – plus another $1,025 in delivery fees. For now, however, only the long-wheelbase Defender 110 will be on sale here. It’s not yet been confirmed when the shorter, three-door Defender 90 will follow.

“After too long of an absence, the Land Rover Defender is once again here in the U.S.,” said Jaguar Land Rover North America President and CEO Joe Eberhardt. “The automotive landscape is certainly brighter with the new Defender in our showrooms, driveways and roads.”

The production of the new Defender was delayed due to the ongoing coronavirus pandemic as automotive assembly plants around the world were temporarily shut down. The UK was one of the countries hardest hit by COVID-19, the disease caused by the virus. 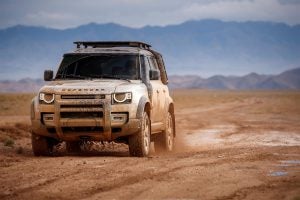 The new Defender’s Terrain system allows a driver to adjust a variety of vehicle settings instantly.

“Deliveries (are) beginning on a limited basis,” for now, said Land rover in a statement, Eberhardt adding that, “In the coming months we will ramp up availability as global circumstances allow.”

The all-new Defender made its U.S. debut at the Los Angeles auto show and was expected to put in a starring appearance in the new James Bond adventure, “A Time to Die.” That film, like numerous other blockbusters, has been postponed until later in the year due to the pandemic.

The Defender — closest thing the British brand has to its brutish, off-road roots – was out of production for four years. But the SUV hasn’t been available in the American market since 1997, Land Rover unwilling to make the massive investment that would have been necessary to homologate the old model to meet U.S. safety and emissions mandates. 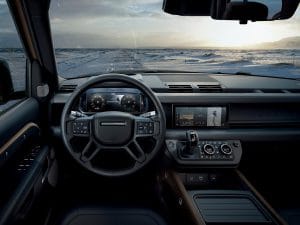 A closer look at the Pivo Pro infotainment system debuting on the new Defender.

The new model will fully comply with both federal and California regulations, the carmaker noted. That was one of the key reasons why the two engines offered for the American market rely on a fuel-saving mild hybrid system. It uses a 48-volt electric drive system that functions as a motorized supercharger. This approach is meant to deliver the best of both worlds, improving fuel economy and lowering CO2 emissions while also punching out 395 horsepower and 406 pound-feet of torque — enough to launch from 0 to 60 in just 7.7 seconds.

There also will be a turbocharged four-cylinder engine making 295 horsepower. 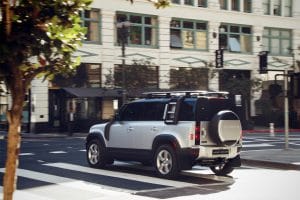 Two engines will be offered for the Defender in the U.S., both mild hybrids.

The new Defender carries over the basic silhouette of the older model but adopts a smoother, more rounded exterior design that has generated some controversy among purists. The SUV, meanwhile, adopts a new, all-aluminum platform, dubbed D7x, which Land Rover claims to be the stiffest it has ever developed.

The 2020 Land Rover Defender 110 also adopts a variety of high-tech features, including the new Configurable Terrain Response system which, the automaker says, allows “drivers to fine-tune a range of settings to suit the conditions more precisely than ever before.” With a single move, functions such as engine, transmission and suspension automatically adjust for road and weather conditions such as mud, rocks or snow.

(Land Rover doubles up to increase the connectivity of the new Defender.)

Inside, meanwhile, the new Defender gets a 10-inch infotainment touchscreen the system including both Apple CarPlay and Android Auto. It also is capable of automatically downloading software using over-the-air updates.

The five-door Defender 110 comes to the U.S. first and is priced at $50,925 including delivery fees. It will be followed by a three-door Defender 90. Fully loaded, the 110 is expected to reach $80,000 – and even higher with aftermarket accessories.