Over the past three decades, the J.D. Power Initial Quality Survey has offered plenty of insights, and any number of surprises, as it tracks the auto industry’s efforts to solve issues ranging from balky navigation systems to faulty engines – and this year is clearly no exception.

In a stunning turnaround, the Dodge brand, long a quality laggard, surged to take the top spot in the 2020 Power IQS, tying Kia, while toppling traditional benchmarks including Korea’s Genesis, Japan’s Lexus and Germany’s Porsche.

If anything, Porsche plunged to the lower quartile in the latest quality study, while Lexus and Genesis also slid sharply down the list. But no one fared more poorly than Tesla. Covered for the first time in the IQS, the California EV maker was, by far, posted an industry-worst score, underscoring recent reports of endemic quality issues impacting its line-up and, in particular, the new Model Y battery-SUV.

Overall, the 2020 J.D. Power Initial Quality Survey might suggest that the industry is losing ground in its battle with defects and other concerns reported by motorists during the first three months of ownership. The industry average rose to 166 “problems per 100” vehicles – or PP100 in Power-speak – from just 93 in the 2019 survey. But that isn’t the crisis it might first appear, said Dave Sargent, Power’s vice president of automotive quality.

“The higher problem levels we see in this year’s study don’t mean vehicle quality has worsened; rather, the redesigned study asks additional questions that allow owners to cite more of the problems that they are experiencing,” he explained.In particular, Power has sharpened its focus on all the new technologies automakers are building into their vehicles, such as infotainment devices and advanced driver assistances systems, as well as various electrified drivetrain packages. In recent years, Power researchers have discovered, traditional mechanical issues, such as faulty engines and transmissions, have become a rarity, and automakers have largely addressed problems such as excess wind noise.

(Auto sales getting back on track, says JD Power.)

The real issue with current models is with technologies that, Power explained in a statement, “are difficult to use, hard to understand or don’t work the way owners want.” The 2020 study found infotainment systems alone were responsible for a quarter of owner complaints, especially when it came to things like voice recognition, touchscreen operation and Bluetooth connectivity;

Dodge is the first domestic brand to rank first in the 34-year-history of the IQS. Kia, which nabbed a tie with a score of 136 problems per 100, has been the highest-ranked mainstream brand for six consecutive years. Genesis, which was the top-ranked brand overall in 2019 fell to third this time – but remained the top-ranked luxury brand.

Among other key findings in the 2020 IQS:

* Domestic brands are, on the whole, now ranking above average. “Collectively, this is the best-ever performance by the Detroit automakers,” said Power, “in the history of the study”;

* And that doesn’t even factor in Tesla which experienced 250 problems per 100 vehicles, 22 more than perennially bottom-ranked Land Rover. This marked an inauspicious debut for Tesla which has traditionally refused to cooperate with outside researchers like JD Power.

Among other surprises highlighted by the 2020 IQS, the little Chevrolet Sonic hatchback was the industry’s highest-ranked vehicle, with a score of just 103 problems per 100. Traditionally, the top-scoring model has been a luxury vehicle, such as the Lexus LS, the Porsche 911 or the Genesis G90. Chevrolet, on the whole, was ranked third among brands, with an average 141 PP100.

And the latest study found that while some brands might not do well, on the whole, they may have individual product lines that shine. Jaguar, which had an average 190 PP100, had the top-ranked offering in the Small Premium SUV segment, its E-Pace, with a score of 159 PP100.

At a brand level, the big winners were Cadillac and Kia which each had four segment winners. 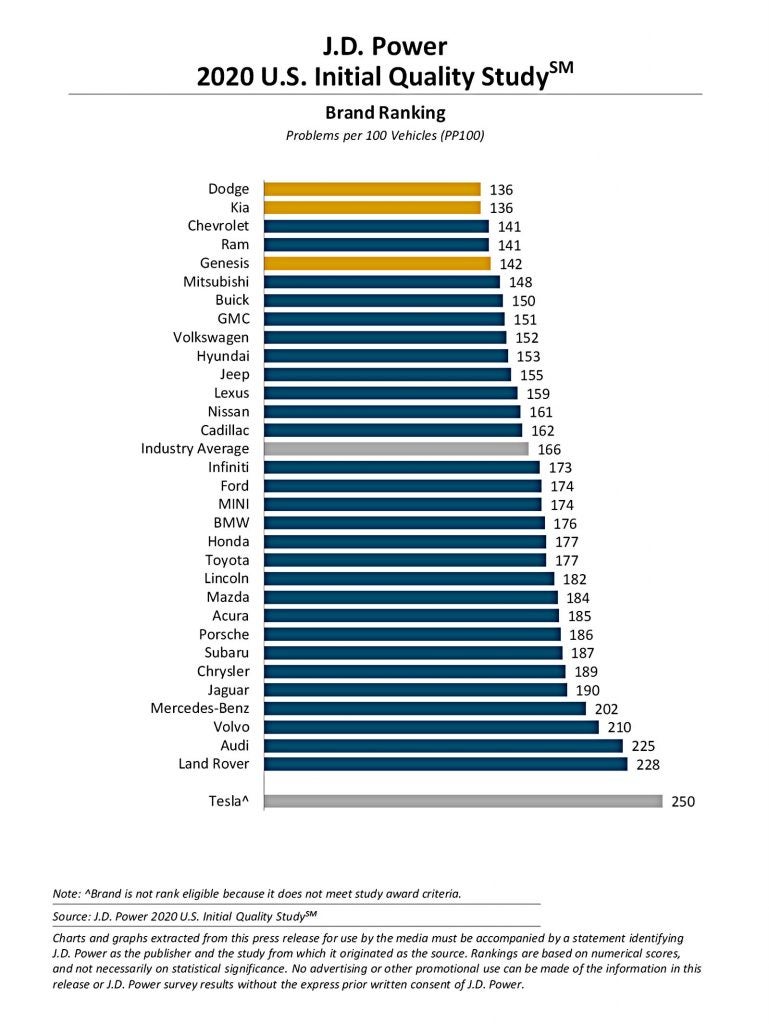 One response to “In Stunning Turnaround, Dodge Shoots to #1 in J.D. Power Initial Quality Study”