GM Aiming to Be Back to Full Production by Month’s End, Says CEO Barra

GM CEO Mary Barra told the Detroit Automotive Press Association that 2020 has been a “tragic year” so far.

It has been a “tragic year,’ between the coronavirus pandemic, the collapse of the U.S. economy and the “brutal” murders of black Americans at the hands of police, said General Motors CEO Mary Barra.

During an online meeting with members of the Detroit Automotive Press Association, Barra addressed a variety of challenges facing GM and the U.S. more broadly, ranging from efforts to enhance diversity to the push to get auto manufacturing back up to speed after a two-month, pandemic-related shutdown. She also clarified comments made last week that seemed to suggest GM might be pulling back on its aggressive push into electrification.

“We’re at a critical point for our company, the industry and for our country and frankly for our globe. I think 2020 will go down in history as a tragic year because of the human and economy devastation of the global COVID-19 pandemic,” Barra said during the webinar, adding her concerns about racial injustice brought to the fore by the murder of George Floyd in Minneapolis last month.

In terms of manufacturing, GM finally has its North American operations back in gear and has so far been able to manage using aggressive containment methods to prevent the spread of COVID-19, the disease caused by the coronavirus, within those plants. That said, there have been some workers diagnosed with the disease but that has caused relatively minimal disruption. 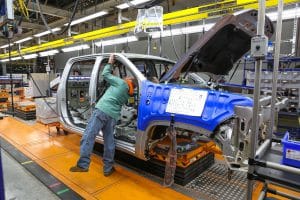 GM’s North American production operations will be back at full speed by the end of June, Barra confirmed.

“We feel, with a few exceptions, we will be running the plants at the rate before COVID by the end of the month,” Barra said.

That will be critical considering that, while U.S. sales fell sharply during March and April and will continue to lag pre-pandemic forecasts for some time, demand remained stronger than the disastrous collapse many anticipated. As a result, inventories have been drawn down. According to LMC Automotive, there are now just 2.6 million vehicles in dealer stocks, about 1.3 million lower than a year ago. That’s particularly true of the big pickups largely unaffected by pandemic lockdowns. As the most profitable products in the GM portfolio, it is critical to replenish inventories quickly.

The pandemic has led automakers to take on massive amounts of debt in very short order, according to a separate study by AlixPartners, the consultancy warning that the industry is entering a “profit desert.”

For her part, Barra acknowledged the industry is facing broad challenges though, she insisted, for GM, “I think we have a very strong future and I don’t see that desert.”

Barra countered concerns in several areas, insisting that GM has great opportunities in China, despite the fact it has been bleeding sales and market share over the last few years.

She also was upbeat about the automaker’s aggressive electrification program which will see it bring to market more than 20 pure battery-electric models by 2023, starting with the GMC Hummer pickup and SUV offerings due next year. If anything “EVs give us a chance” to gain market share along the coasts where GM is weak, she insisted, because those are the regions of the country where electrification is taking hold most quickly.

“We see it very much as a growth opportunity,” Barra said.

A week ago, the GM CEO seemed to be backing off from her strong commitment to battery power when she spoke at another industry event and suggested it will be decades before EVs dominate U.S. roads.

“I am glad you asked that question,” she said, responding to a query by this reporter. “We want to drive the growth of EVs over the next few years,” Barra continued, explaining that even if every vehicle sold in the U.S. were to switch to battery power there are more than 200 million cars, trucks and crossovers in the American fleet. “That tail will be a little longer,” replacing everything on the road with EVs. 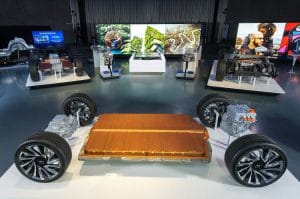 Barra said the company is driving the sale of electric vehicles, but reiterated it will take some times for EVs to be the dominant vehicle in the marketplace.

When Barra was named CEO in 2014, the first female to hold that position in the industry, it was seen as a major step forward for industry diversity. Since then, she has accelerated GM’s efforts to bring women, blacks and other minorities not only into the company but promoted to senior positions.

She has been outspoken in her concerns about systemic racism highlighted by the murder of George Floyd, over the last two weeks meeting with community and business leaders to seek ways to address the problem. Among other things, Barra has announced GM will donate $10 million for diversity efforts, starting with a #1 million gift to the NAACP.

“2020 will go down as the year — when America watched the brutal murder of a black man by a white police officer, and said enough is enough,” Barra told those gathered for the online meeting.

The GM CEO also had praise for Monday’s Supreme Court ruling in support of gay and transgender rights under the Civil Rights Act.

(GM plans a BEV for every brand, product segment and price range.)

“Today’s decision by the Supreme Court is a historic day for the LGBTQ community,” Barra said. “Everyone deserves to feel welcomed and valued for who they are; in the workplace and society.”