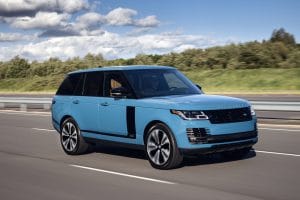 Range Rover is celebrating 50 years as the top luxury SUV in the world with the limited-edition Range Rover Fifty.

One of the hottest segments of the sport-utility market today is the luxury ute, and the vehicle that epitomizes that special group is celebrating its 50th anniversary: the Range Rover.

“The original luxury SUV,” as Land Rover describes it was “born” June 17, 1970. It was the original go-anywhere, traverse-anything ute that could also drop its driver off at red carpet events. To mark the occasion, Range Rover is introducing the new Range Rover Fifty.

The limited-run Range Rover Fifty will be restricted to just 1,970 vehicles globally, commemorating its birth year. The Fifty will be hard to miss as it will come in just four special colors: Carpathian Grey, Rosello Red, Aruba, and Santorini Black.

However, if you really want to stand out, there is a more exclusive set of colors, according to the company. In extremely limited numbers, Land Rover Special Vehicle Operations is also offering the Fifty in one of three Heritage exterior solid paints reproduced from the original Range Rover paint palette; Tuscan Blue, Bahama Gold and Davos White. 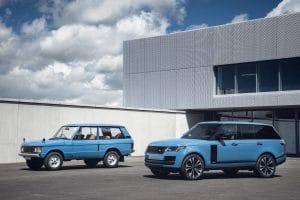 Color alone does not a vehicle make, particularly a limited edition one. The new model will build “on the luxuriously appointed Autobiography,” with several bespoke exterior accents in Auric Atlas including two unique 22-inch wheel designs.

The badging features a “Fifty” script created personally by Prof. Gerry McGovern OBE, Land Rover Chief Creative Officer, which will appear on the exterior of the vehicle and throughout the interior on the unique “1 of 1970” center console commissioning plaque, headrests, dashboard and illuminated treadplates.

To ensure it still lives up to its reputation for style and capability in North America, each vehicle will be powered by a 5.0-liter supercharged V8 powertrain putting out 518 horsepower. The Range Rover Fifty will be available in both standard and long wheelbase body designs. 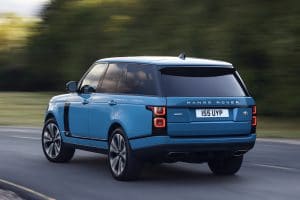 The Range Rover Fifty will be powered by a 5.0-liter supercharged V8 putting out 518 horsepower.

In 1992 it was the world’s first 4×4 to be add electronic traction control and automatic electronic air suspension. In 2012, the latest generation Range Rover became the world’s first SUV to feature an all-aluminum lightweight construction, making it lighter, stronger and more efficient, the company noted.

Remember: luxury and capability. The Range Rover crossed the notoriously impassable Darién Gap, was the first vehicle to ever be displayed at the Louvre Museum in Paris, and won the Paris-Dakar rally twice.

“With its clamshell hood, distinctive floating roof, split tailgate and trademark front fender vents, the Range Rover of today can still trace its roots back to the 1970 original. In its golden anniversary year, it is now the most connected, luxurious and capable yet,” the company said.

(Land Rover doubles up to increase the connectivity of the new Defender.)

The Range Rover has been a desirable vehicle for 50 years, and the company’s sold more than 1 million of them. Full details for the Range Rover Fifty, including pricing and specifications, will be revealed closer to the vehicle’s on-sale date later this year.