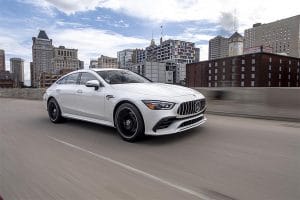 The GT 43 becomes the “gateway” to the Mercedes-AMG sports car line.

The AMG badge has traditionally signaled some of the most exclusive models bearing the Mercedes tri-star, and nowhere is that more true than with the brand’s halo model, the GT. But for those dreaming of a way to park one of the sports cars in their driveway, there’s a new entry point in the form of the 2021 Mercedes-AMG GT 43 4-Door Coupe.

No, it’s not cheap, but considering what you’ve had to come up with until now, the $89,900 for the GT 43 is likely to seem downright accessible for some of the coupe’s fans.

True, you’ll sacrifice a little bit of power and performance to gain access to this halo car but, at 362 horsepower, and with an estimated 4.8 seconds 0-60 time, the new variant is no slouch.

The GT is, of course, the third Mercedes model developed exclusively for the AMG performance division, following the SLS and SLR models – the latter actually a joint effort pairing AMG and Britain’s McLaren. The sports car originally debuted in a two-door incarnation, Mercedes-AMG subsequently adding the somewhat more practical four-door for 2019. 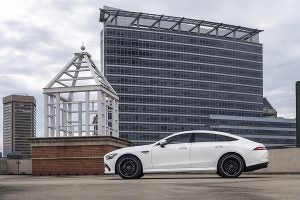 As is its norm, a whole slew of performance variants have been added since the two-door launched in 2015, including the GT R, GT S and GT C. Until now, you’d have to spend at least $116,895 to get into a base GT, with a well-equipped version of the GT R Pro Coupe pushing upwards of $200,000. So, the new GT 43 4-Door is a veritable bargain.

The new model comes powered by a turbocharged 3.0-liter inline-six making 362 hp and 369 lb-ft of torque. That’s before you factor in the powertrain’s EQ Boost. That’s a sophisticated mild hybrid system that, Mercedes explains, “utilizes stored electric power from the 48V battery through an Integrated-Starter-Generator, a powerful electric motor that combines the functions of a starter and an alternator. This EQ Boost unit assists the internal combustion engine with up to an additional 21 hp and 184 lb-ft of torque at low engine speeds.”

Power is channeled through a 9-speed AMG Speedshift transmission and directed to all four wheels, though the AMG version of Mercedes’ 4Matic all-wheel-drive system is decidedly rear-biased. 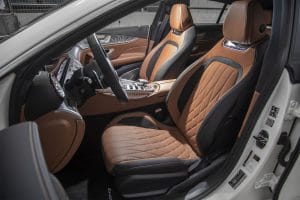 The interior of the 2021 Mercedes-AMG GT 43 4-Door Coupe is clearly not that of an “entry-level” model.

What’s particularly significant about the EQ Boost system is that it comes online all but instantaneously, delivering an immediate kick in the seat of the pants and helping you hit 60 in an estimated 4.8 seconds. Mercedes-AMG has not yet rated the GT 43’s top speed, nor yet released EPA mileage numbers.

Even as the entry model to the GT line-up, the GT 43 is surprisingly well-equipped with features including the AMG Ride Control Sport suspension, silver painted 6-piston front brake calipers, an electronically deployable rear spoiler and other niceties.

How many of the new GT 43s will actually drive off the lot at $89.900 is a good question, however. As the automaker notes in its debut announcement, “the new AMG GT 43 can easily be configured and individualized in a manner similar to other AMG GT 4-door models, with a familiar set of available options and packages.”

Expect to see the four-seater roll into U.S. showrooms late this year.

(Mercedes pulls the wraps off 2021 E-Class coupe and cabriolet, including AMG editions.)