Amping up the fun-to-drive factor - keeping the affordable price tag. 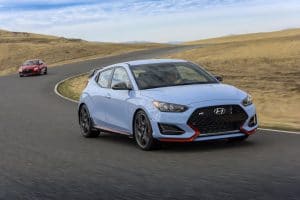 The 2020 Hyundai Veloster N shown in the Performance Blue paint available only on the performance hatchback.

It’s hard not to smile when you get a look at the funky little Hyundai Veloster, with its quirky layout: two doors on the driver’s side, one on the passenger side.

The South Korean hatchback has found a small but reasonably steady audience since its debut for the 2012 model year, outlasting some once-promising competitors, such as the Honda CRX, and defying the overall vanishing act in the passenger car segment.

While endearing, the original Hyundai hatch was short in several key areas where you’d expect to judge a sporty hatchback, namely handling and performance. But the latest twist on the Veloster story largely resolves those problems, the new Hyundai Veloster N substantially amping up the fun-to-drive factor.

The original, 2012 model was powered by an anemic 1.6-liter inline-four that turned out a mere 138 horsepower and 123 pound-feet of torque. Getting to 60 required a painful 9 seconds. Today’s take on the hatchback offers buyers several powertrain options to choose from, starting with the base 2.0-liter naturally aspirated inline-four making a more acceptable 147 hp and 132 lb-ft, as well as a 1.6-liter turbo-four that punches that up to 201 hp and 195 lb-ft – which will get you to 60 in a reasonable 6 seconds flat. 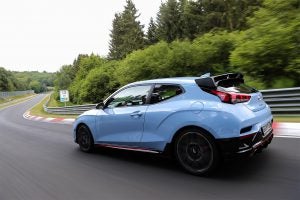 The Veloster N is distinguished by largely functional enhancements, such as the rear wing.

Now, however, there’s a third option and the 2021 Hyundai Veloster N is the sort of hot hatch that once was the near-sole purview of the Japanese. While Honda has struck back with the Civic Type-R, the Veloster N is a clear shot over the bow warning that the Koreans are there to compete, both on and off the track.

The heart of the Veloster N is, of course, found under the hood, a turbocharged 2.0-liter I-4 engine that, with the optional Performance Pack, pours out a blistering 275 hp and 260 lb-ft of torque. Considering the hatchback weighs in at just 3,100 pounds, that’s a lot of oomph waiting for orders from your right foot. Even without that optional upgrade, you’ll still have 250 hp at the ready. Expect 0-60 times in the low to mid-5 second range, depending on your skill with a clutch, and a top speed rated at 155 mph.

Yes, clutch. The Veloster N is one of the rare birds left on the market, offered with a six-speed manual – though the 2021 will have an optional automatic. Whichever gearbox you choose, it will send power exclusively to the front wheels. Shod in Pirelli rubber, it does a solid job of sticking to the pavement during hard launches, something that required less finesse than with the Civic Type-R which could all too easily start hopping its front wheels if you didn’t careful modulate its own clutch pedal. 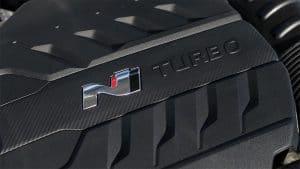 The 2.0-liter turbo-four makes as much as 275 hp with Veloster N’s optional Performance Pack.

What’s particularly impressive about the new engine is that you can forget about turbo lag. With the Performance Pack, you’ll have all of your torque in play by just 1,450 RPMs, according to Hyundai – something that meshed with our own, on-road experience.

While getting some real power out of the Veloster is a delight, finally delivering on the promise of the distinctive design we first saw nearly a decade ago, the N edition is much more than a straight-line sled. And for that, we once again bow our heads in appreciation to Albert Biermann, the one-time head of BMW’s legendary M brand, and now the head of R&D for the entire Hyundai Motor Group. 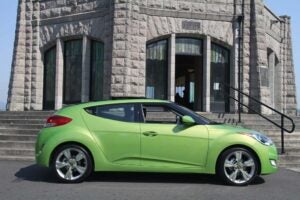 The original 2012 Hyundai Veloster was a fun car to look at but was severely underpowered.

As impressive as raw torque might be, delivering a quick car is relatively easy. It’s how you handle corners that is the real challenge. And this is where Biermann has been most effective. Steering and suspension were long the Achilles Heel for the Hyundai brand. No longer, and certainly not on the growing N line-up.

Even in its Comfort setting, the performance Veloster boasts crisp steering feel and a predictable manner in corners. To really get the feel of what it could do, though, required a drive out from Metro Detroit to the appropriately named Hell, Michigan, where we find some of the state’s most challenging roads. Switching to Sport Mode, corners legitimately marked “35” were readily handled closer to 60, with room to push further had we so chosen. The 2021 Veloster N experienced only modest body roll, enough to let you connect with what the car is doing on the road.

(Veloster Grappler Concept ready to wrestle for attention at SEMA.)

If we did have any gripes it was that the suspension does get a bit too harsh, even in Comfort Mode, on the rough pavement that is the typical Michigan road. There’s also a surprising amount of road noise working its way into the cabin, especially on concrete pavement. 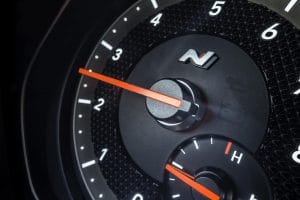 But for those who put the emphasis on performance, those are reasonably forgivable flaws and the Veloster N will readily do a good job as a daily driver. The B, incidentally, offers a “Custom Mode” that allows a driver to mix-and-match settings for things like steering, gearing and the car’s variable damping. We wound up using this to opt for Sport-like settings in everything but the transmission, opting to keep it in a higher gear to reduce fuel consumption during everyday driving.

Visually, a few key touches immediately give away the fact that this isn’t your everyday Veloster, starting with the fact that it sits a slight 0.2 inches lower. The upgraded hatchback, for one thing, gets a big wing right off the roofline – though nowhere near the massive arrangement used on the Civic Type-R. The car also gets a distinctive mesh grille with N-badging, a red front splitter, red brake calipers and unique side sills. It’s also available in a distinctive Performance Blue paint, perhaps the only blue hue that we’d be happily seen with these days.

Inside, the 2021 Veloster N generally resembles the standard-issue hatchback, with a few welcome updates, including grippier and better-bolstered sport seats, that stick, and twin analog speedo and tach gauges. 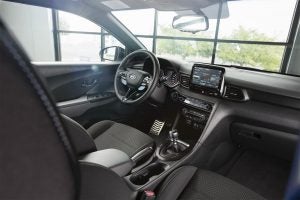 The Veloster N gets sports seats, a unique N-Mode feature on the infotainment screen and other upgrades.

There’s the familiar assortment of tech features, including the Hyundai driver assistance technologies which, to the most, can be disabled when you’re pushing hard. The infotainment system can handle both Android Auto and Apple CarPlay, and the touchscreen has a unique N-Mode function that, among other things, instantly reads out forward and lateral G-forces, a fun way to measure both your launch and braking, as well as how well you just managed that corner through Hell.

As for fuel economy, the 2021 Hyundai Veloster N without the Performance Pack is rated at 22 mpg City, 29 Highway with the six-speed manual. We have not seen numbers yet for the automatic.

As for pricing, it comes in at $29,700 with delivery fees, a veritable bargain compared to the Civic Type R at $37,000 – though the Honda is an all-in price, with pain color the only option.

(Hyundai peels back the cover to reveal new Elantra.)

In terms of price, Hyundai here sticks to its roots, offering a surprisingly affordable option for those who want a seriously impressive hot hatch. But, unlike early products from the Korean carmaker, you don’t get the feeling you’ve settled for a bargain model. The Veloster N is handsome, inside and out, well-equipped, and a blast to drive. It’s likely to give pause to many motorists who might otherwise be ready to jump into an SUV.