UAW Still Not Satisfied With Plans to Restart Auto Plants

UAW President Rory Gamble wants more proof that workers will be safe before they return to the Big Three plants.

With automakers looking for ways to restart production, the United Auto Workers said Thursday said it wants to see more proof that workers on the industry’s assembly lines will be protected before giving it approval to any kind of back-to-work order.

“We continue to engage in talks with Ford on an ongoing basis regarding protocols for the health and safety of our members in the workplace,” UAW President Rory Gamble said in a statement issued after Ford Motor Co. executives outline steps the company is taking to insure its workers are safe from COVID-19. 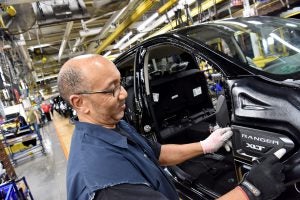 Ford Motor Co. is looking to restart its plants May 18, following protocols developed in China and at its two U.S. plants making personal protection equipment.

“We are also strongly advocating self-reporting and testing for those exposed to the virus or exhibiting symptoms at a minimum, and a stringent adherence to Centers for Disease Control and Prevention (CDC) and World Health Organization guidelines. At the present time there is no restart date,” Gamble said.

However, that last line likely reflects only the union’s point of view, as Ford executives announced last week they intend to ramp operations back up on May 18.

“The health and safety of our employees is the most important thing,” Jim Farley, Ford’s chief operating officer, said during a conference call Thursday.

Farley also noted that re-starting auto production is critical to the U.S. economy. “It’s critical we get this restart right. Auto manufacturing represents 6% of GDP,” Farley said, who noted during the call that he would have no problems allowing family members to work under the new protocols.

Ford’s Jim Farley said he believed that the plants are safe for workers to return to on May 18.

The standards and precautions introduced this week expand on those used in Ford factories in China and Taiwan where work has already resumed, and in the U.S., where Ford has been manufacturing medical equipment for weeks, said Gary Johnson, Ford chief manufacturing and labor affairs officer.

“These protocols are the result of weeks of working closely with our unions, especially the UAW, on assuring the health and safety of our Ford family while planning how to reopen our facilities. We have evidence that these protocols work and are already using them without a single issue to date in Ford plants where we are manufacturing ventilators and PPE for medical personnel,” Johnson said.

General Motors is also readying to restart production as well. As part of that process, the company is issuing a literal playbook to returning employees to outline new safety measures and guidelines to remain safe, many of which mirror the efforts made by Ford. GM and Fiat Chrysler are also aiming for a mid-May restart for operations.