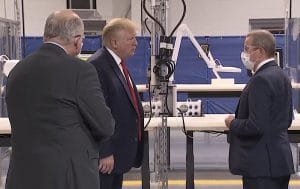 President Donald Trump toured Ford Motor Co.’s Rawsonville Components Plant where the company has been churning out ventilators to combat the COVID-19 pandemic, and praised the company and the plants workers for their efforts to help in the fight.

Trump met with several of the company’s top officials, including Ford Executive Chairman Bill Ford Jr. and CEO Jim Hackett, while not wearing a face mask in violation of the company’s safety protocols and not long after. Other Ford executives and White House officials were masked. He later said he did wear a mask for part of the tour, but not during the public portion because he didn’t want the “press to see me wear it.”

Ford officials confirmed that the president did wear a mask for part of the time he was there.

“Bill Ford encouraged President Trump to wear a mask when he arrived. He wore a mask during a private viewing of three Ford GTs from over the years. The President later removed the mask for the remainder of the visit,” the company said in a statement. 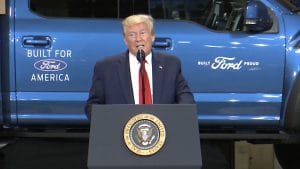 Trump praised the company and its workers, calling both a “national treasure” during a speech at Ford’s Rawsonville plant.

Trump’s been heavily criticized for his reticence to wear one, especially after a recent visit to a mask factory in Arizona where employees contracted COVID-19, and even though he has a special mask just for him: it’s blue and appears to have the presidential seal on it, and he claims “I look good in it.”

Prior to his visit, Michigan Attorney General Dana Nessel appealed to him in an open letter to wear a mask, saying he had a “social and moral responsibility” to do so. She said that she expected her request to fall on deaf ears.

His failure to wear a mask actually violates Michigan Governor Gretchen Whitmer’s executive order to wear face masks in enclosed public spaces. Technically, the tour of the facility also violated part of the emergency order aimed at preventing the spread of the coronavirus.

(Ford getting ready for the post-pandemic chapter.)

Trump addressed Whitmer briefly during his speech, saying he had a “great” conversation with her regarding the recent floods in mid-Michigan. It’s a rare positive comment he’s offered about Whitmer as the two have tangled about the president’s response to the coronavirus outbreak. Whitmer is reportedly under consideration as a vice presidential candidate.

He also took time during his speech to criticize the UAW for supporting presumptive Democratic presidential nominee Joe Biden, saying “he doesn’t know where his is,” and to say his moves to end the Trans-Pacific Partnership and the renegotiation of the North American Free Trade Agreement “saved” the auto industry. 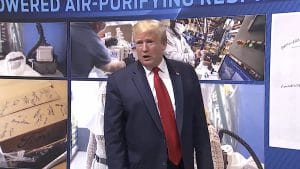 President Trump said he wouldn’t wear a mask in front of the media.

He also recounted that Bill Ford called him and “asked the most American of all questions: how can we help? (It’s) True. And I thought, ‘that’s nice.’” After it was determined that Ford could produce ventilators, it took the company less than 40 days to go from sketch to production. The automaker also produced thousands of respirators, face shields and face masks since March.

The praise from the president runs counter to his much-publicized criticism of the company during the election and even after. Bill Ford Jr. during his time at the podium thanked the president for touring the factory, but then appeared to want to make sure Trump had a very clear understanding about the No. 2 automaker and its impact in the U.S.

“We are the most American automaker,” Ford said. “Employing more hourly workers in the U.S. than any other automaker. We assemble more vehicles in American than anyone else, and we invest more here.”

(Auto workers worried about returning to work during a pandemic.)