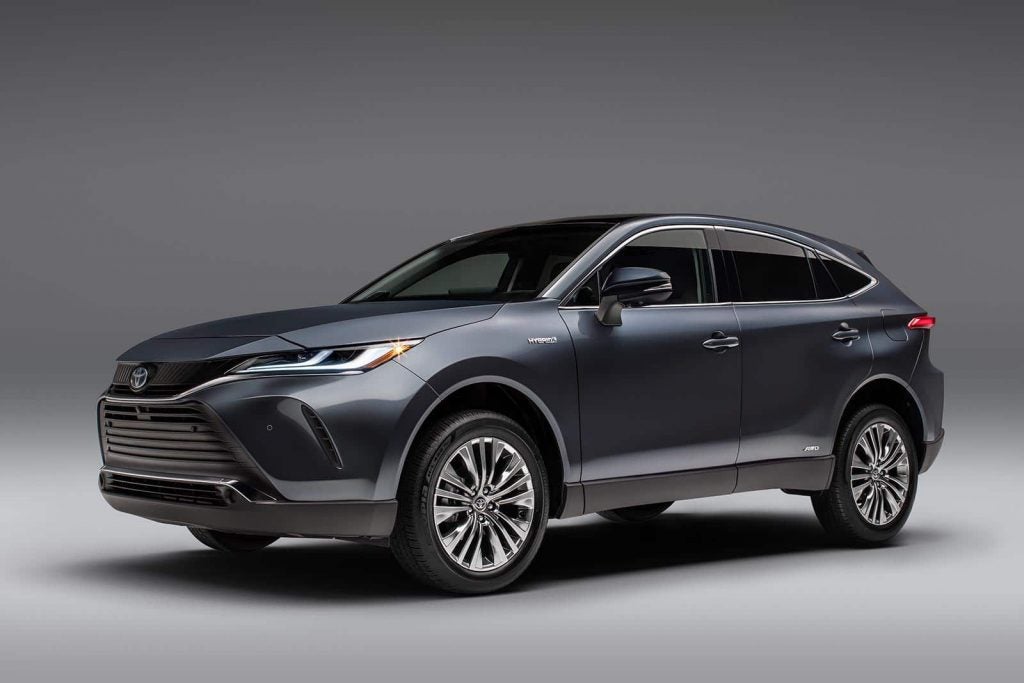 The 2021 Toyota Venza will be offered exclusively as an all-wheel-drive hybrid.

Toyota has confirmed plans, first reported by TheDetroitBureau.com more than a month ago, to introduce two new “all-hybrid” models. That includes both the next-generation Sienna minivan and a new, two-row utility vehicle bringing back the Venza badge that was pulled from the U.S. market in 2015.

While the 2021 Toyota Sienna and Venza models will share the basic Synergy Hybrid Drive system found in the Japanese automaker’s familiar Prius model, they will follow the direction of the latest-generation RAV4 Hybrid which is the most powerful version of Toyota’s best-selling SUV.

While the two new models will deliver some of the highest mileage numbers in their market segments they “also (will be) delivering an unexpected level of performance,” said Bob Carter, Executive Vice President of Sales, Toyota Motor North America, “relying on the instant torque coming from their electric motors.” 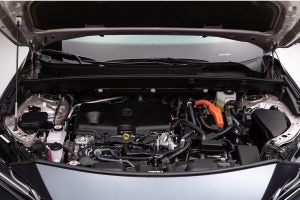 The 2021 model will take the Venza nameplate in a new direction. The original version was pitched as a two-row crossover but was really more of a tall wagon that didn’t click with U.S. buyers. The new model is more in line with the current Toyota crossover line-up and will slot into what Carter called “the sweet spot between the RAV4 and Highlander.”

Like the smaller of those two, the Venza will be offered only in a two-row configuration, but it will offer a more upscale look and features.  That starts with an 8-inch touchscreen infotainment system, with a 12.3-inch display with navigation available as an option. Upgrades also include a 1,200-watt, nine-speaker JBL Premium Audio System, a head-up display and the new Star Gaze electrochromic glass roof which can switch from clear to various frosted modes with the touch of a button. 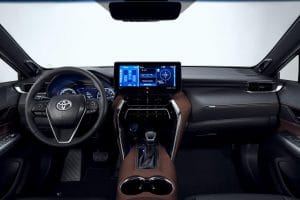 Venza is aimed to slot in-between the two-row RAV-4 and three-row Highlander.

Under the skin, the new crossover will share the basic TNGA architecture anchoring such Toyota models as the Prius. And it will also be offered solely with a gas-electric hybrid drivetrain that will offer as much as 40 mpg in the EPA Combined test cycle. But, like the hybrid version of the RAV4, Venza puts a premium on performance.

The crossover’s version of the Hybrid Synergy Drive will pair a 2.5-liter gas engine with three electric motors to deliver a peak 219 horsepower combined. Power is primarily delivered to the front wheels but the third motor kicks in when torque is needed at the back wheels. 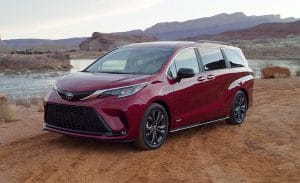 The 2021 Toyota Sienna also goes all-hybrid, but will be offered in either front- or all-wheel-drive.

The new Venza will be offered exclusively in all-wheel-drive configuration. The 2021 Toyota Sienna, however, will be available either in a two-motor front-drive package or an optional three-motor AWD configuration. Though the minivan features the same basic drivetrain, its output has been bumped up to 243 hp – reflecting Sienna’s heftier mass – and will deliver a Combined 33 mpg.

Sienna has been one of a dwindling line-up of minivans available in the U.S. market. Toyota officials are betting they can increase its appeal with the 2021 makeover by delivering a mix of new features, better performance and more sporty design.

(Toyota cutting NA production by a third through October.)

“A lot of people love minivans but they’re not thrilled by the boring by the boring look,” said Kevin Hunter, the president of Calty Design, Toyota’s U.S. styling unit, “so we tried to change that up…putting a lot of passion and excitement and energy into” the 2021 model. 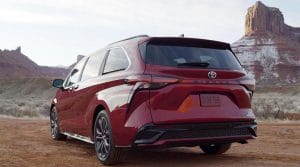 The 2021 Sienna will feature a new, high-line grade aimed at empty-nesters and the more affluence family buyers.

The goal was to give the next-gen Sienna a more SUV-like exterior appearance, with a more powerful nose and better on-road stance. Inside, meanwhile, the 2021 model is “less bus-like,” said Hunter, one of several Toyota officials who joined in on a media webinar offering an advance look at the two new hybrid models.

While minivans may have a soccer-mom reputation, industry data reveal there are several distinct buyer niches, including upscale empty-nesters who like the comfort and roominess such people-movers can offer, especially on longer trips. To play to that audience, Toyota is introducing a new, top-line grade with a variety of new, luxury features. These include an onboard vacuum and refrigerator, a digital rearview mirror, captain’s second-row chairs with ottomans, the seats being able to slide fore and aft by as much as 25 inches.

(Toyota warns of trouble ahead as global sales are hammered by the coronavirus pandemic.) 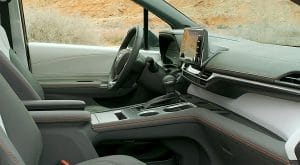 The overall look of the new Sienna is a bit more SUV-like, with a less bus-like interior.

As one would expect of a vehicle whose primary market is as a family-hauler, however, the 2021 Sienna is loaded with Toyota Sense driver assistance systems, like Venza.

The decision to launch the two new models in all-hybrid form is no surprise considering Toyota’s focus on the technology which it launched exactly 20 years ago with the original Prius model. The automaker has laid out plans to have every product in its line-up offered with at least some form of electrified powertrain option by 2025 and expects those models to account for 25% of its global sales.

How the two new hybrid models will play out at a time of cheap fuel is unclear, Toyota officials acknowledged, though the emphasis on performance should help. Notably, said Carter, the hybrid is now the best-selling version of Toyota’s RAV-4 which is, meanwhile, the automaker’s top-seller in the U.S.

Toyota expects to sell somewhere “in the 50,000 range” of Venzas each year. It did not discuss sales targets for the Sienna. Expect to see Venza roll into U.S. showrooms by “late summer,” said Toyota brand boss Jack Hollis, with the next-gen Sienna to follow late in 2020.