Partners aim to move past the crippling Ghosn affair.

Nissan CEO Makoto Uchida has been pushing for changes at the automaker. The plan that will move the Alliance forward will be revealed next week.

Almost exactly 18 months after former boss Carlos Ghosn was arrested on allegations of financial misconduct, the three members of the Renault-Nissan-Mitsubishi Alliance are expected to announce next week a new strategic plan aimed at holding the long-running partnership together.

The Alliance was nearly torn apart as a result of the Ghosn affair and the long-simmering internal disputes that it brought to the surface. But officials with each of the three companies have made efforts in recent months to stress their desire to continue what has become one of the world’s best-selling automotive groups.

If anything, statements made in January indicated the carmakers would deepen their cooperation and parse out between them areas in which each company might take the lead. That could see Nissan effectively take control of the group’s electrification efforts, and Renault serve as the Alliance lead for operations in Europe.

Such moves are expected to address not only short-term financial problems but also resolve ongoing disputes that have made it difficult to achieve long-promised synergies that could save billions of dollars annually.

The partnership was originally created two decades ago when Renault mounted a massive bailout plan to save an increasingly insolvent Nissan. The French automaker appointed Ghosn to manage the deal and the Brazilian-born executive soon was elevated to Nissan CEO. More recently, Nissan itself helped bail out struggling Mitsubishi. For his part, Ghosn served in a variety of senior positions prior to his November 2018 arrest, including CEO of the now three-company Alliance.

Ghosn has repeatedly asserted that he was the victim of a “coup,” alleging a move to fully regain control of Nissan from Renault. Under the terms of the original bailout agreement, the French company was the dominant player in the partnership, though all three had financial cross-holdings.

What precisely will be announced on May 27 has not been revealed, the partners only advising they would hold “a joint press conference regarding the progress in Alliance activities.” But, based on comments made in January, moves to deepen cooperation are expected to be a major part of what will be detailed.

According to several current and former senior-level employees of the Alliance and its partners, the three companies have never cooperated at the level they attempted to portray publicly. Among other things, that meant that there often was extensive duplication of vehicle platform and powertrain efforts significantly adding to development costs.

(Renault-Nissan-Mitsubishi Alliance reconfigures board of directors.)

That may be one of the key areas addressed by the new strategic plan. One of the most widely anticipated moves would see Nissan take the lead in future electric vehicle development efforts. The company was the world’s first to bring to market an all-electric vehicle for mass production, the Leaf.

Another cost-cutting move may see the partners assign specific regions in which they would play lead, such as putting Renault in charge in Europe. 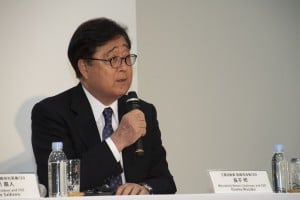 Mitsubishi CEO Osamu Masuko has ushered in many changes at the automaker.

What is uncertain is whether there may also be plans to change the level of financial cross-holdings or to address Nissan’s long-running frustration as to the power Renault holds over its partners.

The three automakers clearly could use the help better leveraging of the alliance could provide. Nissan, in particular, With the coronavirus pandemic adding to its problems, the second-largest Japanese automaker is expected to go more than $400 million into the red for the fiscal year that ended in March. It originally had forecast a $795.3 million profit.

Nissan is expected to announce plans to cut $2.8 billion in fixed costs. But Renault also wants to shave $2.2 billion in costs over the next three years and a report by a French weekly, the Canard Enchaine, claims it will close four of its factories in France.

(Nissan plans for restructuring call for $2.8 billion in cost cuts.)

The upcoming news conference comes amidst new developments in the Ghosn affair. Earlier this month, seven people were arrested in Turkey for allegedly assisting in the executive’s audacious escape from Japan last December. Today, two others, including a former Green Beret, were arrested on similar allegations in the U.S.