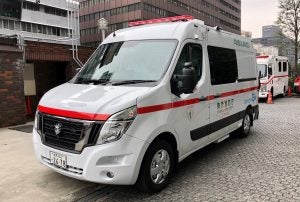 Nissan Motor Co. has donated an electric-powered ambulance to the Tokyo Fire Department.

“Nissan strongly believes in sustainable mobility and strives to contribute to a world with zero emissions and zero fatalities,” said Ashwani Gupta, representative executive officer and chief operation officer at Nissan. “This project is another great example of our efforts to enhance accessibility of eco-friendly vehicles to local communities.”

(Nissan plans for restructuring call for $2.8 billion in cost cuts.) 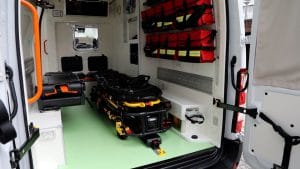 Nissan’s new ambulance is being used by Tokyo’s fire department.

The EV ambulance package was developed by Gruau, a major European emergency vehicle bodywork company. It is based on a converted Nissan NV400 currently on sale in Europe and the bodywork, was done by Autoworks Kyoto to fit with Japanese regulations and designed to meet customer needs.

The introduction of the first EV ambulance in the Tokyo Fire Department fleet is part of the Tokyo Metropolitan Government’s “Zero Emission Tokyo” initiative.

The Nissan EV Ambulance is equipped with an electric stretcher making for easier operations by the firefighters and ambulance attendants.

(Nissan’s Taxi of Tomorrow gets go for Big Apple debut.)

The noise and vibration levels in the vehicle are significantly lower in comparison with a traditional gasoline-powered vehicle, helping reduce negative impact on patients as well as on staff handling sensitive medical equipment on-board the vehicle. 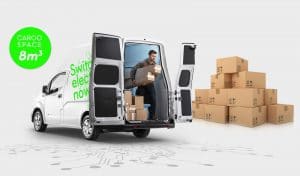 Nissan is expanding its battery-electric van offerings to meet the needs of different segments.

Two lithium-ion battery packs support its EV capabilities (33 kilowatt-hours) with an additional battery (8 kWh) allowing longer use of electrical equipment and the air-conditioning system. The ambulance can also turn into a mobile source of power in case of a power outage or natural disaster.

Nissan officials also said they expect the EV Ambulance to be inexpensive to maintain and efficient to charge. The expense of charging the vehicles lithium-ion battery with the 33-kWh capacity is expected to be relatively minimal, Nissan officials said.

Nissan has recently introduced the electrified version of the e-NV200 van and added the XL Voltia trim level aimed at delivery companies. The roof of the rear cargo area has been raised to allow for the driver to stand up straight while in the back of the van.