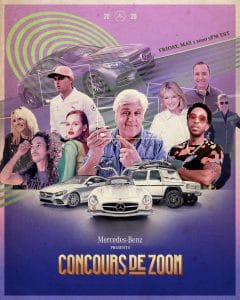 It’s a lousy year, let’s face it, for classic car fans. Traditional events like the Pebble Beach Concours d’Elegance, the Greenwich Concours, the Quail: a Motorsports Gathering, and other A-List events have been canceled due to the coronavirus pandemic, and others, such as the Woodward Dream Cruise, seem increasingly unlikely to go on as scheduled.

What’s a car nut to do to get their fix? Well, Mercedes-Benz says you’re in luck as long as you have an Internet connection and a computer or mobile device with the Zoom app loaded.

The German automaker plans to hold the first “Concours de Zoom” later today, with an assortment of A-List celebrities giving you a proper, socially distanced look at their favorite Mercedes models. Among those who’ll be making an appearance are that ultimate car guy, Jay Leno, as well as Rickie Fowler, Martha Stewart, Madelaine Petsch and Ludacris, along with several other serious Mercedes collectors.

(Pebble Beach Concours the latest auto event to cancel due to pandemic.)

We’re expecting to see plenty of plugs for new models, according to Mercedes, ranging from the little A 220 to the AMG GT C Coupe. But the emphasis will be on some historically significant Benz models.

(Launching cars during a pandemic: Hyundai goes online to reveal the new Elantra.) 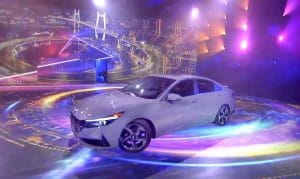 The Elantra Hybrid makes its debut during a webcast,

Mercedes isn’t the only automaker turning to the Internet to help it reach out and replace traditional automotive venues including not only classic car events but car shows such as those in Detroit and Paris, both of which have been canceled for this year.

We’ve seen a number of new models debut online, including the next-generation Hyundai Elantra, which was unveiled during a March webinar.

Automakers also have had some fun by launching online mini-movies and even, in the case of Kia, scheduling a weekly cooking show.

On a more practical basis, manufacturers are relying more than ever on online vehicle configurators and promotions to retain consumer interest. Meanwhile dealers have been shifting to direct online sales at what Ford COO Jim Farley calls a “breathtaking” rate.

We all may have to retain social distancing for the foreseeable future but the Internet, it seems, will let us continue our love affair with automobiles new and old.