Maker has burned as much $9 billion during the shutdown.

GM CEO Mary Barra said the company would be eliminating some jobs at its Cruise Automation subsidiary.

Cruise Automation is cutting some employees, but the company remains tightly focused on its objective of developing self-driving vehicles, GM Chairman Mary Barra said during a web conference.

Barra confirmed earlier reports from California that Cruise would be eliminating some jobs. “It was a very prudent action,” Barra said. The cuts will not involve any technical staff dedicated to the company’s mission of developing self-driving vehicles, she said.

“They’ve grown very quickly,” she said. “The employees were working in non-technical areas.”

GM’s San Francisco-based Cruise subsidiary will lay off about 160 people.

Cruise, a wholly owned subsidiary of General Motors, employs about 2,000 workers, largely in the San Francisco Bay Area and about 160 or about 8% of the company work force will be laid off. Those affected will receive transitionary assistance and health care benefits for the remainder of the year, according to an email from Cruise CEO Dan Ammann.

Barra said the COVID-19 pandemic underscores the importance of autonomous vehicle research. “It’s a huge opportunity to show people the kind of vehicle they are going to want in the future,” she said.

The autonomous vehicles can be used to provide clean, safe transportation complete with private spaces that are inherently safer than a vehicle with a human driver. They also can be used to deliver packages, she said.

(GM retains faith in its electric future during pandemic.)

“We are full speed ahead,” she said during the event, which was sponsored by Bank of America, and touched on several topics relevant to GM right now. 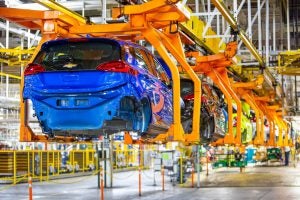 GM has burned between $7 billion and $9 billion during the shutdown.

Dhivya Suryadevara, GM executive vice president and chief financial officer, said the shutdown of the company’s operations due to the coronavirus pandemic has led to a substantial “cash burn” of between $7 billion and $9 billion for the second quarter and a loss of as much as $2 billion.

GM recently sold $4 billion unsecured bonds and add to its $2 billion to its revolving line of bank credit to shore up its balance sheet and cash reserves, she said.