For the sophisticated boy racer, Honda offers some subtle, yet notable, improvements. 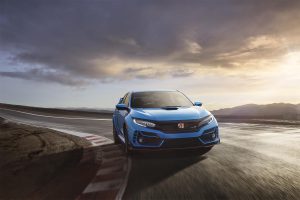 The “R” stands for racing, and the 2020 Honda Civic Type R is as comfortable on track as on the street.

The Honda Civic has long had a special appeal to performance fans who want a small, affordable ride that readily can be customized. But, until just a few years ago, the real prize was out of reach for American buyers, the extreme machine of the Civic line-up, the Type R, only arriving in U.S. showrooms for the 2017 model-year.

Now, with the late-arrival 2020 model, the hot hatch is getting a mid-cycle update. The changes aren’t massive, and you might initially miss some at a cursory glance, such as the larger grille meant to improve cooling. But they’re also more than just cosmetic, enhancements to the Type R’s suspension aimed at improving both performance and driving comfort.

If anything, they make the 2020 Honda Civic Type R still more of that rare breed, a car that can deliver neck-snapping acceleration and on-rails handling while still being a great everyday driver for those who can’t afford separate sets of wheels for road and track.

The 2020 Type R made its formal debut at the Chicago Auto Show back in the seemingly innocent, pre-pandemic days of February. The driving event originally scheduled by Honda, which was to have included some track time, was scuttled as the country went into lockdown. The Japanese automaker did find a way to deliver to TheDetroitBureau.com one of its early production models and we had the opportunity to take the hatchback for some extensive drives, among other things along the Detroit region’s most challenging driving roads, through the appropriately named town of Hell. 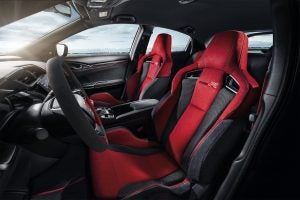 Right out of the box, the interior of the Civic Type R delivers the sporty look and feel you’d expect.

While we came back with a minor quibble or two, what we discovered was that while the 2020 Honda Civic Type R might technically qualify as a minor update, the changes were enough to significantly improve the car’s fun factor, boosting what Honda’s Jimmy Jenkins refers to as its “driver involvement, so that the car is one with the driver.”

From the very beginning, the Type R was meant to be pretty much the end-all-be-all of the Civic family, with a way-over-the-top design to prove it. Visually, the 2020 update doesn’t change that, especially with the massive rear wing designed to keep the hot hatch firmly planted on the road at high speeds.

For the 2020 model year the car gets new air inserts up front, a modified front spoiler meant to increase downforce and a larger grille. The key there is to bring in more cooling air, and Honda claims that under aggressive – read “track” – driving, the engine temperature is reduced by 18 degrees.

Other exterior changes include a switch to more body-colored trim pieces and the addition of sideview mirrors that now signal turns. There’s also a hot new color available exclusively for the Type R: Boost Blue Pearl.

(Honda teams up with GM to develop new EVs.) 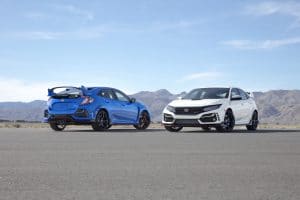 Interior changes also are modest, including the switch to an Alcantara wrap for the steering wheel, something that retains its cool and better resists sweat when driving hard. As with the 2017 model, the emphasis is on functionality, and virtually everything done to the 2020 Civic Type-R reflects that mantra. The shifter knob, for example, was made slightly heavier which enhances its throw, especially for those in a hurry.

The Type R’s brakes, meanwhile, have been revised to provide a shorter stroke, something you might not immediately notice until you face an emergency stop or are charging hard into a tight corner.

The suspension changes include new lower ball joints up front and stiffer B-arms in the rear. The adapative damping system, meanwhile, now reads the road and responds by regulating the stiffness at each corner fully ten times faster than before. That translates into sharper handling, more precise steering and an incredible sense of grip.

Going through Hell we found ourselves able to take corners at breakneck speeds, seldom breaking a sweat due to the 2020 Type R’s confidence inspiring handling. The car’s overall road manners put some decidedly more expensive sports cars to shame.

Kudos also go to the grippy sport seats that ensure you’re locked into place during even the most aggressive cornering maneuvers. 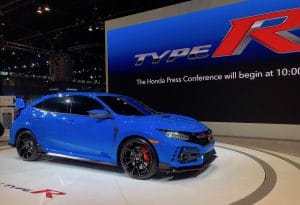 The 2020 update of the Civic Type R made its debut at the Chicago Auto Show last February.

The one area that Honda left alone for 2020 can be found under the hood. There were no changes made to the powertrain – not that this gives reason to complain. The updated Type R retains the turbocharged 2.0-liter inline-four that readily punches out 306 horsepower and 295 pound-feet of torque that’s readily available at the twitch of your right foot.

What may come as a surprise is that Honda now sells about a quarter of all manual transmissions in the U.S. market and, as you might expect of the Type R, that torquey engine is paired with a short-throw six-speed manual gearbox that is, for the most part, a joy to use.

If we have any complaint about the Type R it’s the fact that you still have to work at balancing throttle and clutch pedal during hard launches. Otherwise, you get a little too much torque for the front tires to handle and wind up with some acceleration-robbing wheel hop. It’s not an insurmountable challenge but it takes a few tries to get everything to hook up right – and when it does, the reward is visceral. 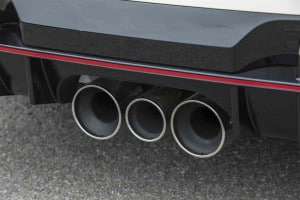 The center tailpipe on the Type R is a resonator, boosting grumble at low speeds, reducing noise at high revs.

While the powertrain may not have been touched with the 2020 refresh, you might think it had. Another tweak for 2020 brings the introduction of a new, active noise enhancing system. It subtly integrates synthesized sounds intended to match what the powertrain produces to give you that extra aural thrill during hard acceleration.

At the other end of the technology spectrum, the 2020 Honda Civic Type R finally gets the automaker’s suite of advanced driver assistance systems, the Honda Sensing mix including such features as active cruise control, forward collision warning with automatic emergency braking, lane departure warning and lane keeping assist, and more.

For those who don’t like all these “nanny” features, many can be shut off, notably the lane keeping system that might otherwise be an annoyance when you’re sweeping through corners searching for the best line. 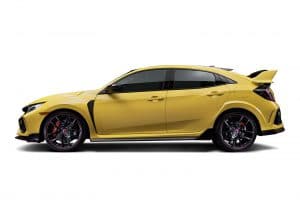 The 2021 Honda Civic Type R Limited Edition will be a lighter weight track-oriented version of the hot hatch.

There also is a three-setting driver mode control that regulates with a single switch such things as steering boost, throttle response, suspension damping and electronic functions like stability control.

As good as the 2020 Honda Civic Type R might be, there are always those who want just a little more, and for those serious about track time, Honda will be bringing in the Type R Limited Edition during the 2021 model-year. Among other things, it will shed its infotainment and A/C system to shave weight, while adding such niceties as 20-inch light forged aluminum BBS wheels. There will only be 600 copies of the race-focused hatchback, however, and they may not last long.

For those who aren’t looking for serious track time, however, the 2020 Honda Civic Type R more than delivers. It was a long wait for the ultimate Civic and now, with this mid-cycle update, it gets even more appealing.

Expect to see the Type R cross-shopped against the Likes of the Volkswagen Golf R and Subaru STI.

Pricing for the 2020 Honda Civic Type R is set at $37,950, including delivery fees, with no options other than color.