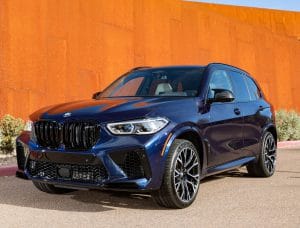 The German automaker liked to call itself the builder of the “Ultimate Driving Machine” also builds fine utility vehicles. However, the 2020 BMW X5 M50i does deserve to be in its very own select category. For one thing it comes from BMW’s highly regarded M series business unit, which is nestled inside the company’ manufacturing empire with the power to engineer vehicles for maxim performance and the results are impressive.

The model I drove was powered by a 4.4-liter, 32-valve twin-turbo V-8 engine with variable valve controls. With car companies the world over sidelining the development of internal combustion engines, I suspect at the end of its useful life out on the road, it could be taken out of utility vehicle body and placed in a museum somewhere as the ultimate expression of a motor that depended gasoline as fuel. It is a most impressive and intricate piece of machinery.

The powertrain is a 4.4-liter engine and the eight-speed transmission can produce 600 horsepower and 553 foot-pounds of torque. Moreover, the powertrain operates so smoothly and efficiently that it is almost invisible except now you place your foot on the throttle and all that power comes directly into play. 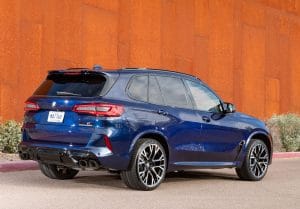 The X5 M50i will go from zero to 60 in 3.8 seconds, according to BMW’s engineers, and the top speed is limited to 155 miles per hour, though I doubt most drivers will get anywhere near that speed unless they take it out on a track or have hankering for a heart-to-heart conversation with  a local judge.

One of things that BMW has done is harness the dual-clutch transmission, so it produces unique notes to feed through the car’s dual exhaust.

Cars with 600-hp engines also need to be equipped with a well-honed suspension, and BMW has equipped M-Series X5 with what is described as an adaptive suspension with active “roll stabilization” that uses information from sensors around the vehicle to help with the effort to maintain control.

The result is that despite the enormous amount of power from the engine is a stable ride over a variety of road surfaces. I never felt the power was going to overwhelm.

The vehicle, which also is equipped with a speed-sensitive transmission and six-caliper piston brakes on the 21-inch wheels, also seemed quite stable and always under control. 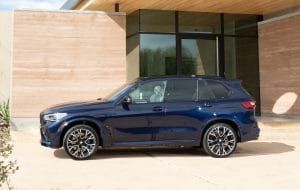 Bits of color emphasize the M control buttons on the center console, on the M Leather steering wheel and gearshift lever. Illuminated door sill plates, specific to each model are standard as is carbon fiber trim.

I know purists have never gotten over the introduction of the I-Drive, which is supposed make it easier to handle the steadily increasing amount of information available in a modern automobile, especially if its confected with wireless network with Bluetooth. The seventh generation I-Drive with its rotary dial is standard on the 2020 X5 M. The on-board navigation system and voice recognition system are also very effective.

The 2020 BMW X5 comes with a long list of standard and optional driver assistance systems, including cruise control that can take the vehicle up to 130 mph and back down with automatic braking, according to the vehicle’s engineering specifications. 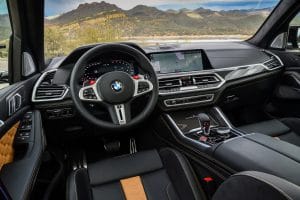 The driver assistance systems process camera images as well as the data gathered by ultrasonic and radar sensors that monitor the vehicle’s surroundings, to warn of potential hazards and to curb the risk of an accident with corrective braking or steering inputs. The clarity of the images assembled by the system is excellent and offers drivers a better sense of everything around the vehicle at the critical moments when the vehicle is started and put into gear.

The power in the on-board computers and the engine are not cheap and when loaded into the 2020 X5 M Series and the results are pricey. The base price on the vehicle I drove was more than $82,000 and the final price for the manufacturer’s suggested retail price for model I drove was $97,195.

The results are very impressive blend of power, technology and craftsmanship.