BMW Keeps on Truckin’ with its 2021 5 Series Sedan 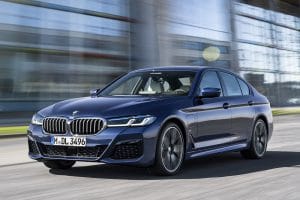 For 2021, the BMW 5 Series gets a little softer exterior look, except for the grille and headlights which receive a sculpted refresh.

BMW is a study in extremes these days. Just a week after it debuts a big, high-powered SUV, it rolls out a sedan. Not just any sedan, though. The Bavarian automaker’s taken the covers off its seventh-gen BMW 5 Series line-up, including a new mild-hybrid upgrade for some models as well as new plug-in hybrid version.

The next-gen model sports four models for 2021, counting the aforementioned iteration with a 48-volt mild hybrid system offering a little extra punch when the driver hits the go pedal.

Now in its sixth decade, the BMW 5 Series continues to a must-drive option in what the company describes as the “executive sport sedan” segment. In fact, its direct competition, the Mercedes-Benz E-Class debuted its new coupe and cabriolet just before BMW’s new offering. 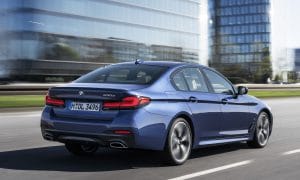 The rear of the new 5 Series shows off the new L-shaped taillights and a new lower bumper area.

For $54K-plus, the next-gen 5 Series gets the customary evolutionary exterior updates. It’s a clean look with softer edges, although the front receives the opposite treatment where it gets a more sculpted look, especially the head lights.

(BMW’s Vision M Next is a Plug-In that Runs Like a Sports Car.)

On the inside, the space is anchored by the standard Live Cockpit Professional with iDrive 7, a 12.3-inch digital instrument display and a 12.3-inch digital central touchscreen control display — a 2-inch upgrade over the previous version. Naturally, standard navigation, Apple CarPlay and Android Auto ompatibility are included. To give the who set up a more sophisticated look, the buttons on the center console are now finished in a high-gloss black. 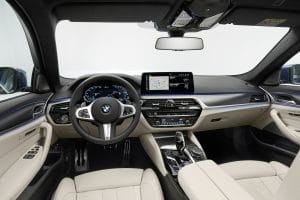 The interior of the new 5 Series shows off two 12.3-inch touchscreens and a slew of new technology.

Wrapped up in those massive screens is a bunch of technology, starting with the latest version of BMW’s Intelligent Personal Assistant. Press a button or simple utter “Hey BMW” and the world is your oyster. That may be a bit of an exaggeration, but the system can do a variety of things ranging from reading emails to changing the interior temperature of the vehicle to getting directions to your next destination.

The dashboard on the four- and six-cylinder 5 Series can be ordered in an optional Black SensaTec with brown stitching, which is standard on the M550i xDrive. All models feature standard Sport seats (M Multi-contour seats on M550i xDrive) and a 40:20:40 split folding rear seat.