"One of the most important pieces for us as we rebuild the future for Acura," says brand boss Jon Ikeda 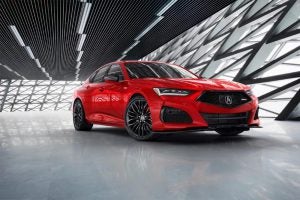 The 2021 Acura TLX gets a complete makeover and also brings back the high-performance Type S models.

While more and more automakers have been writing off their sedan lines, Acura sees the new 2021 TLX as critical to its future, even if it won’t match the sales numbers of SUV models like the RDX and MDX.

In what has become the norm during the pandemic era, the high-line Honda division pulled the covers off of the new sports sedan during an online backgrounder. The second generation Acura TLX not only gets a new look, new platform and new powertrain, it also brings back the Type S edition with its own high-performance V-6.

“The TLX is one of the most important pieces for us as we rebuild the future for Acura,” said Jon Ikeda, the brand’s general manager. “There’s a level of expectation that comes with a sports sedan and this car really delivers on that.” 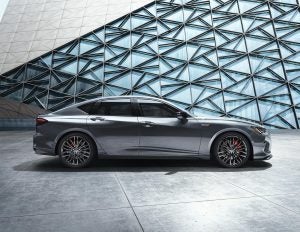 The new Acura TLX is longer, lower and wider and adopts a clear fastback shape.

Visually, you might get a sense of déjà vu checking out the 2021 Acura TLX, and for good reason. The look of the sedan, with its deeply sculpted exterior, was heavily influenced by two well-received show cars, the Acura Performance Concept and the Type S Concept, both of which served as reference points as the project moved forward, according to Ben Davison, the 2021 TLX’s lead exterior designer.

The nose of the sedan is long and low, with an extended dash-to-axle ratio and short overhangs. The headlights and wide pentagon grille also sit low, that grille featuring a starburst pattern. The hood features crisp and deeply sculpted lines. The silhouette is that of a fastback, with accent lines that further enhance the feeling of the car’s low center of gravity. Flared fenders and horizontal taillamps further the sense of a low, wide and muscular sedan that seems perpetually in motion. Below the new bumper one spot twin exhaust pipes. 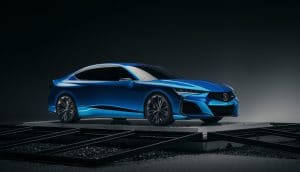 The body wraps around an entirely new platform which, said Ikeda, shares almost nothing in common with the outgoing TLX – or anything else in the automaker’s line-up.

The interior is, likewise, all-new, and it sits further back than before, with inward-sloping pillars meant to emphasize the muscularity of the overall design. Despite that, the added width and length of the 2021 TLX allows for more space for passengers in virtually every dimension, including seat width, head and knee room.

The overall look is more refined, with upgraded materials that include Milano leather and real wood on mid and higher trim levels. A higher center console divides the space up into what Acura calls a “Dual Personal Cockpit.” Front passengers can be seated in optional 16-way sports seats. 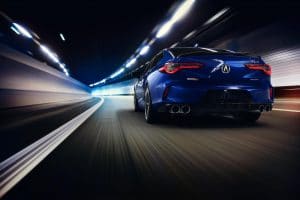 The 2021 Acura TLX gets a twin exhaust, the Type S getting four pipes.

On the high-tech front, there’s a 10.25-inch, high-mount infotainment touchscreen, as well as a 7-inch multi-information display. The TLX also can be ordered with a 10.5-inch Head-Up Display, as well as the latest, 17-speaker version of the ELS Studio 3D sound system. Other options include the AcuraLink telematics system which includes 4G LTE Wi-Fi and over-the-air update capabilities.

The sedan also gets a broad range of advance driver assistance technologies, including forward collision warning with auto-braking, as well as an all-new advanced airbag system. 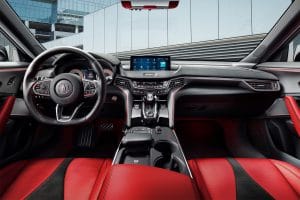 The interior of the new TLX has a dual cockpit feel.

For performance fans, there’s a new multi-mode selector that controls everything from throttle and transmission response to the optional dynamic damper settings and even the 27 customizable interior lighting themes named after iconic drives around world, such as Pacific Coast and Route 66.

Of course, the heart of any sports sedan is found under the hood and the “base” 2021 Acura TLX features a new 2.0-liter turbo-four replacing the old, naturally aspirate four-banger. The package makes a healthy 272 horsepower and 280 pound-feet of torque — 66 hp and nearly 100 lb ft more than the outgoing model — pushing it through a 10-speed automatic with a newly lowered first gear for more aggressive launches. The sedan can be ordered either in front-drive configuration or with Acura’s sporty Super-Handling All-Wheel-Drive system.

An even more sporty version of the SH-AWD technology is available on the Type S model which makes its return this year. That is paired with a 3.0-liter turbo V-6. Acura won’t release specs on the Type S powertrain until closer to launch, however. 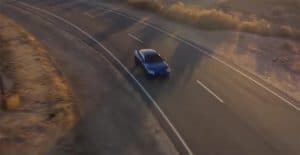 Sports sedans need to do more than just deliver good acceleration. Acura claims the gen-2 TLX delivers with a lower center of gravity and the stiffest body of any sedan it has ever offered, the Type S getting even more bracing than other trims.

All models get larger brakes than the outgoing sedan, the Type S adding four-piston Brembos up front.

The Type S also will have larger, 20-inch wheels and either summer or all-season tires. And it will feature an enhanced engine sound system, though Acura hasn’t yet said whether that will be through natural or augmented sound engineering.