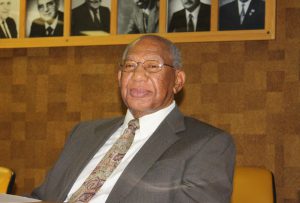 UAW pioneer Ruben Burks died due to COVID-19 complications. He was 86.

Ruben Burks, a union pioneer and the first African American to serve as the United Auto Workers’ Secretary-Treasurer, the organization’s second-highest office, has died.

A lifelong resident of Flint Michigan, the soft-spoken Burks was 86. He passed due to complications from COVID-19, according to his family, the union said in a release.

“It is never easy losing a member of the UAW family, and it is especially hard when it is someone like my union brother Ruben Burks, who gave so much to members and the union that he loved,” said UAW President Rory Gamble.

“He was a gentleman, and a fighter for what is right and just. I am forever thankful for his leadership and his friendship,” Gamble said. 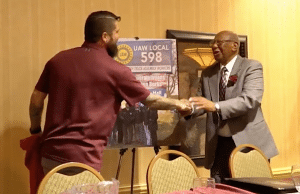 UAW Local 598, Burks’ home unit, honored him by renaming the local union hall after him.

Burks’ long history of unionism and advocacy for social justice started in 1955 when he began working as an assembler at the former General Motors Fisher Body Plant 2 in Flint, where he joined UAW Local 598.

Throughout the years, he served in various leadership posts, including shop committeeperson and executive board member. In 1970, then-UAW President Walter Reuther appointed Burks to be an International Representative in Region 1C. By 1989, he was the director of Region 1C and held that position for three terms.

He restructured the Community Action Program to emphasize issue education and recruiting and training UAW members to work as volunteers in campaigns in the region.

In 1998, Burks was the UAW Secretary-Treasurer in the midst of a bitter strike against GM in his hometown of Flint, Michigan.

UAW President Rory Gamble described Burks as a “gentleman” and a “fighter.”

He held the post until 2002. He also used his skills to help the Flint community, including holding a leadership post on the Flint Genesee County Chamber of Commerce’s Economic Development team, and becoming the first labor leader to chair the Board of Trustees of the United Way of Genesee and Lapeer counties in 1991.

He also was director of the Flint Urban League, director of Goodwill Industries of Flint, an advisory board member of the University of Michigan-Flint, and a leader with the UAW-General Motors Community Health Care Initiative in Flint.

Burks was also involved in the Special Olympics, March of Dimes, Red Cross and Easter Seals. He received an honorary degree in Community Development from Mott Community College in recognition and appreciation of his contributions to the Flint community.

“Ruben Burks will always be here in spirit,” said Director Steve Dawes, the director of UAW Region 1D, which was merged with Region 1C several years ago. “He was a soft-spoken man who was always here when we needed him. He was full of wisdom and never stopped fighting for active and retired UAW members and all working people.”