While the U.S. automotive market is in the midst of its worst slump since the Great Recession, sales during the coronavirus pandemic haven’t tumbled quite as badly as originally expected – and there are signs of “recovery nearly everywhere,” according to J.D. Power.

Across the U.S., sales were still down by 45% last week. However, all but one of the top 25 American markets gained momentum, based on sales data gathered from thousands of dealers across the U.S. through Power’s PIN network.

“We have experienced four weeks in a row of growth from (the late-March) trough,” said Tyson Jominy, head of the Power network, “We are in the midst of the recovery, so, from here we would expect sales to continue to improve.”

The word, “recovery,” is a matter of perspective. March sales were down about 39% compared to year-ago levels. The original Power forecast saw April tumbling by as much as 80%, but demand held higher, in part due to hefty incentives, such as the zero-interest loans initially launched by General Motors and then copied by most of its key competitors.

Sales have improved on a weekly basis since the beginning of the month, according to Jominy, though April will still end about 45% lower than a year ago. Since the coronavirus pandemic struck, the auto industry has lost about 782,000 sales based on original industry forecasts. And that number is expected to climb well into the millions by the end of the year.

With so much uncertainty – especially when it comes to the possibility of a second wave of infections – Power has provided a range of possible forecasts, dipping as low as 12.7 million sales for all of 2020. Even the research firm’s most optimistic scenario envisions sales reaching no more than 14.5 million for the full year, still a 15% plunge.

The most significant finding from the past week was that even the hardest-hit markets were showing upward momentum, while some were barely off from pre-pandemic levels. The Dallas region was down by a mere 5% compared to what Power had originally expected before the pandemic, but Detroit still saw sales off by more than three-quarters, marking the fifth week in a row where demand was down more than 75%.

As has been the case since the outbreak of COVID-19 first started sweeping across the U.S., Power data show some distinct winners and losers in terms of market segments. Pickups lost a wee bit of momentum last week, but were down a mere 9% from pre-crisis forecasts. On the other hand, compact car sales were off a hefty 53%. Premium vehicles, overall, saw a decline of 48%, PIN data revealed, reflecting the heavy reliance on leasing among upscale buyers. Many lease customers have been opting to extend their deals while they figure out the direction of the weakened economy. 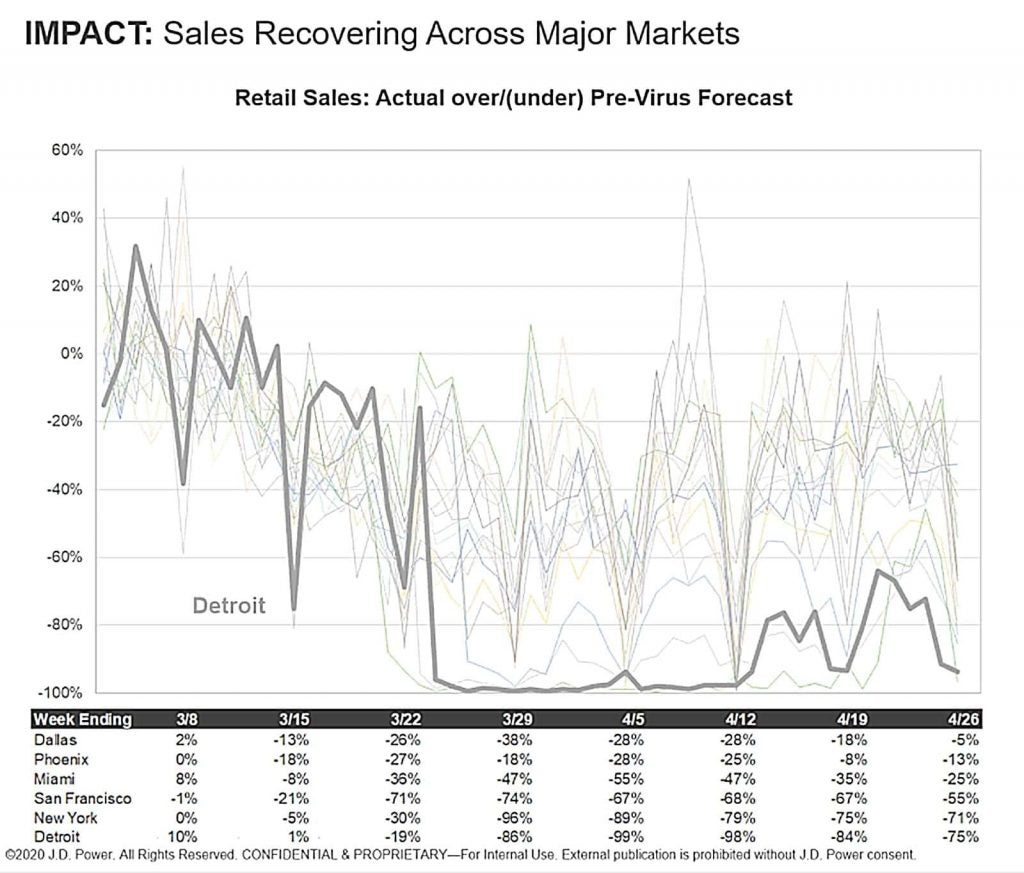 On the plus side, Jominy said that could create a burst of demand later this year as lessees finally return to market.

But there’s a downside here. The used car market has been hit at least as hard as the new side of the business. And residuals, the lease equivalent of trade-in pricing, have fallen off a cliff. As a result, leases could generate as much as $3.6 billion in losses for the industry by the end of 2020, said Power’s Chief Data Officer Thomas King, complicating the already serious financial problems facing automakers.

Meanwhile, manufacturers are finding themselves facing the likelihood they will have to further ramp up incentives that have been running at an average of more than $7,000 on pickups and nearly $5,000 a vehicle overall, King added.

(U.S. new vehicle sales expected to drop by half in April.)

While manufacturers might hope “to be dialing back these deals” as they get into the 2021 model-year, said King, “There is absolutely a risk buyers will get trained to expect these deals” or simply wait until sweeter incentives are offered.