Survivor of One Epidemic, Author and Historian Mike Davis Felled by the Coronavirus Pandemic

A career that combined a passion for history and a love of the auto industry. 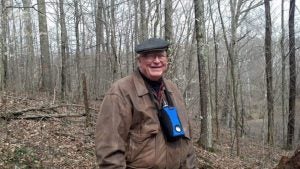 Automotive historian, preservation and author Mike Davis died at the age of 88.

He survived one epidemic only to be brought down by the coronavirus pandemic. Automotive historian Mike Davis, a long-time contributor to TheDetroitBureau.com – and a long-time personal friend – is one of the roughly 25,000 Americans who have so far died from COVID-19.

“He was a font of automotive history,” said Edd Snyder, himself a retired automotive public relations executive who worked with Davis briefly at Ford Motor Co.

Davis’s knowledge about the auto industry, as well as Detroit history, was matched only by his ease at telling tales. Over the years he wrote 18 separate books and reportedly had as many as five more in various stages of development when he was struck down. He was a frequent contributor to numerous media outlets, including this one, routinely providing unexpected insight and occasionally turning conventional wisdom upside down.

(Witness to History: Nothing new under the sun.)

“He was the repository of so much history,” said Detroit journalist Maureen McDonald. There was “so much that could be said.” 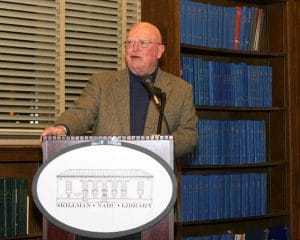 Davis was a respected author and historian, working with the National Automotive History Collection at the Detroit Public Library.

Oddly, one of the stories about Davis was seldom discussed. In fact, many who thought they knew him well missed the fact that he had trouble moving one of his arms. That was because, as a young man, he had been struck by polio, a disease that, like the coronavirus, ran rampant across America until a vaccine was developed in the mid-1950s. Davis actually considered himself fortunate because many of those who were victims of that virus suffered far more serious disabilities – if they survived.

It was something Davis seldom mentioned and, if he did, it wasn’t to seek sympathy. It came up the first time when he saw me trying to figure out why he had to use one hand to lift up the other to put it on the steering wheel of his car.

Davis began his professional career on the media side of the desk. It was in the blood, his father a newspaper editor and columnist, his mother a nurse.

Davis was born in Buffalo but spent most of his youth in Louisville. As much as he loved the writing business, however, his heart was in history. He moved north to study at Yale University, earning a bachelors degree in history and then a masters in historic preservation at Eastern Michigan University. He worked towards, but never finished, a doctorate at Detroit’s Wayne State University.

Like so many journalists, Davis worked for a variety of different outlets throughout the years, including Business Week’s Detroit bureau, before entering the public relations business. His depth of knowledge served him well in that role, giving him a level of credibility – but also an integrity that came through in the background he provided when pitching a story or answering questions. 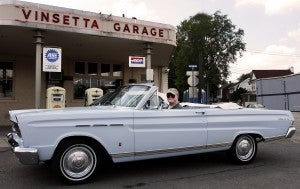 Columnist Mike Davis sits in front of the Vinsetta Garage in his 1965 Comet. Photo by Len Katz.

Davis spent 27 years at Ford. After retiring, he found himself combining both of his passions, renewing his journalistic career but shifting from breaking news to offering historical insight. His stories for this site were eagerly received by readers relishing the inside tales they could find nowhere else.

His books covered a broad range of topics, including Detroit’s role in World War II as the “Arsenal of Democracy,” as well as the history of Ford’s Great Lakes shipping fleet. An obituary in the Detroit Free Press notes that Davis’s last book was a collection of letters written by his mother who served as a nurse in a group during World War I. It was called “Forsaken Angels: In Their Own Words.”

Davis did more than contribute to the auto industry’s written history, he helped to preserve it, working with the National Automotive History Collection at the Detroit Public Library. He also helped created an award the library hands out each year, “The Collectible Car of the Future.”

“A renaissance person with a journalist’s pen, with Mike’s passing we lose a recorder for the local memory bank,” Mark Patrick, former coordinator of special collections for the Detroit Public Library, wrote in a Facebook tribute. “Mike Davis always lent his intellectual heft to not only the National Automotive History Collection but also the Burton Historical Collection” at the Detroit library.

Davis also created an award in the name of his late wife, Mary Kay, as part of the now-defunct Writers Conference at Oakland University. He spent the last 30 years living in the Detroit suburb of Royal Oak with second wife Karen Schwarz Davis. He is survived by his wife, daughters Penny and Betsey, son J. Mattison, stepdaughter Laura Crandall, and granddaughter Morgan Davis.

Like others who have been struck down by the coronavirus, traditional services for Mike Davis, who was 88, will be postponed until a later date. A memorial service is expected to take place at Christ Church Cranbrook.