Concept will morph into the all-electric Polestar 3. 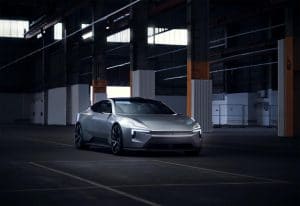 The Polestar Precept Concept was supposed to debut at the Geneva Motor Show that was canceled due to the coronavirus pandemic.

The coronavirus pandemic has thrown the automotive world into turmoil, not only putting production on hold in many places but also shutting down the auto show circuit. This has, in turn, has delayed the debut of some critical new products like the Polestar Precept Concept.

Volvo’s electric vehicle subsidiary previously gave us a terse look at what it was planning to reveal at the Geneva Motor Show last month. Now, it has pulled the last of the wraps off of the prototype which is expected to strongly influence design of the brand’s next production model, the Polestar 3.

“People ask me all the time, ‘what is the future of Polestar?’” says Thomas Ingenlath, the former Volvo design chief now serving as the EV brand’s CEO. “Of course we are not showing our future models just yet, but Precept shows you where we will be heading – our design direction, our ambitions about sustainability and the great digital user experience we will bring with those future cars. Precept showcases our future, not as a fancy dream or something out of a sci-fi movie. This is our reality, to come.”

There’s need to start clearing things up. Polestar started out as an independent company racing Volvos. Then taken over by the Swedish automaker, it started producing specialized versions of existing products. Several years ago, Volvo announced that the Polestar name also would be used for a standalone brand focusing on electrified vehicles. 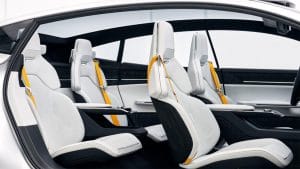 The vegan interior makes extensive use of recycled materials, including recycled pop bottles and fishing nets.

We’ve already seen the Polestar 1 plug-in hybrid and Polestar 2 battery-electric vehicle and they don’t stray far from the current Volvo design language. With Precept, however, we see the new brand starting to develop its own styling approach.

The brand’s Volvo roots haven’t vanished entirely. Precept picks up the familiar Hammer of Thor front lighting used by the parent brand, albeit with a more high-tech touch. But the four-seat, four-door fastback no longer looks like it could be mistaken for a new Volvo.

The nose is clearly electric, with only the slimmest slit of a grille above the bumper. Additional air intakes help reduce range-stealing turbulence around the front wheel, while also improving brake cooling.

Precept’s long clamshell hood rises rakishly, with subtle bulges above the front wheel wells accentuating a sense of power. There are a few other familiar, Volvo-esque touches, such as the compound crease where the greenhouse and rear fender fuse together. But this is the clearest indication yet that Polestar will move ever more in its own design direction going forward. 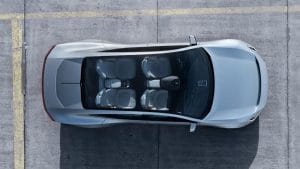 Though the glass roof minimizes any sense of claustrophobia, there is no actual rear window.

Perhaps the most unexpected design element is the lack of a rear window. Instead, the glass roof flows way back to reduce any sense of claustrophobia. And, for visibility, the Polestar Precept opts for rearview cameras. Considering so many new models are now offering switchable camera mirrors, that shouldn’t be much of a shock for buyers if this detail is carried over into production.

There are no sideview mirrors, either, on the concept. Regulators have begun to approve that camera-based approach in Europe and Japan. We’ll have to see if NHTSA will be ready to revise U.S. standards – as some manufacturers are asking for – by the time Polestar 3 goes into production.

The Polestar team took a twist on the old form v function debate, using form for function. What little there is of a front grille has been renamed the SmartZone,” and houses an array of high-tech sensors, including various radar and ultrasonic units, as well as a high-definition wide-angle camera. There are other SmartZones, Polestar notes, “on either side of the car (which) house additional driving assistance sensors.” And the package is completed with a roof-mounted LIDAR pod that would become part of a fully autonomous driving system.

Like its first two production models, Polestar’s Precept Concept puts a premium on sustainability, with exclusively vegan interior materials that use, it claims, “high levels of recycled content.” All told, it says there has been an 80% reduction in the use of plastics compared to comparable vehicles. The seat covers, for example are a 3D knit made entirely from recycled PET bottles. The carpets are made from recovered fishing nets. 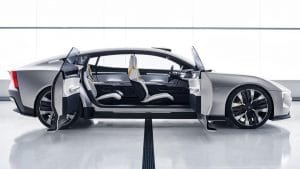 The Precept also emphasized technology, starting with a 15-inch digital interface that recognizes the driver and automatically sets a variety of vehicle functions to their preference. The underlying operating system was developed in partnership with Google.

“Proximity sensors adjust what is shown on the screen depending on where the user’s hand is placed – display brightness and screen content adjusts according to movements and the need for more or less information depending on what the user is doing,” Polestar notes. Additional, eye tracking sensors adjust what and how information on the digital gauge cluster are shown to the driver.

Underlying the Polestar Precept Concept is the new SPA2 architecture that will be used for a wide variety of Volvo products, from the S60 sedan up to the XC90 SUV. The flexible platform can handle a wide variety of powertrains, including the plug-ins that are set to dominate the Volvo side, as well as the all-electric models that will be the primary motivator for future Polestars. Batteries will be tucked beneath the load floor, whatever the powertrain.

Surprisingly, the new brand has decided to keep us in the dark about Precept powertrain details. It is widely expected that Polestar 3 also will go all-electric. How soon we’ll know for sure is uncertain, however, especially with so many of this year’s auto shows being delayed.